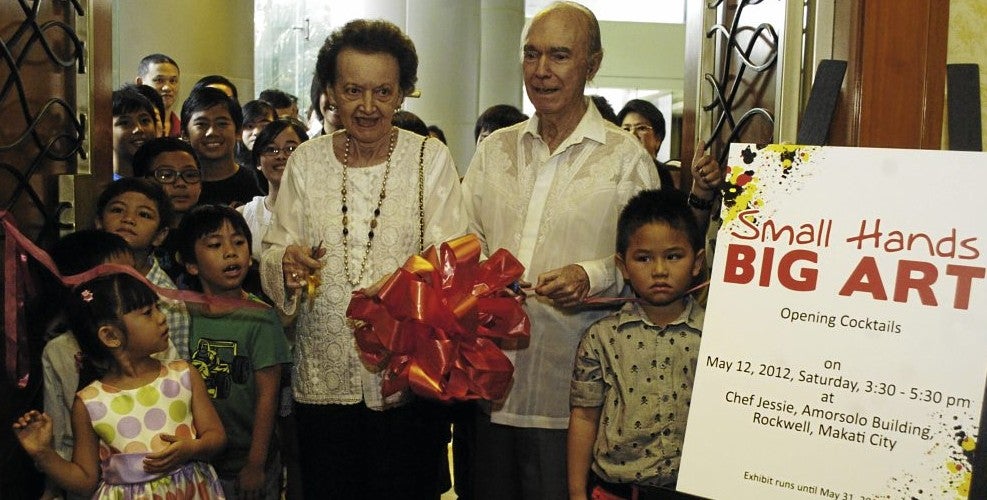 There has always been something extraordinary about Olivia Torres, said her mother Richie. At 11 months old, for instance, she already knew how to hold a pencil properly—with a firm, tripod grip, as compared to other babies’ fist-like grasp.

At age 1, she began doodling, and at 2 started drawing. Today, at 5, she is comfortable working with Cray Pas and watercolor, and has participated in her first ever art exhibit along with about 50 other children.

Called “Small Hands, Big Art,” the exhibit is chef Jessie Sincioco’s annual fundraising for children’s charity. Now on its seventh year, the exhibit runs until tomorrow, May 31, at Chef Jessie’s, Amorsolo Building, Rockwell, Makati City. This is so far the biggest exhibit, with artworks hanging on walls all the way up to the second floor of the restaurant.

Olivia’s painting of flowers hangs on the first floor. She likes painting flowers and trees, she said, mostly inspired by flowers in their house.

When she wakes up in the morning, she goes straight to her canvas and sketch pads to paint or draw, while still in her jammies. Some days she’ll rummage through her mother’s trash bin, looking for papers she can draw on. In fact, every time the family goes out malling, she gets excited not at the sight of clothes and shoes and toys, but at the bright red-and-white sign of National Book Store.

“She goes crazy when she sees one, and spends a long time lingering in the arts section. We never go out empty-handed,” said Richie, laughing. “We’re not forcing her to do it, and we’re not stopping her from creating art, either. We just let her be. Come school time, though, she will have to follow a schedule that will balance her time for art and studies.”

Artist and art teacher Paul Mesina is in awe of Olivia’s talent. “Every child loves art. Some become good over time, and some are naturally gifted. Olivia is one of the gifted ones.”

Mesina was there for his nephew, Ryan Steven Mesina, 11, whose parents couldn’t attend the exhibit. His dad was in the hospital, he said, and his mom was taking care of him.

Ryan Steven, whose dad is a silkscreen print artist, has two acrylic paintings on exhibit. One is a painting of a fish, a favorite subject, the young boy said, because his mother often cooks fish.

“Koi 1” and “Koi 2” are the titles of the works of Ryan Steven, who’s now on his second year of participating in Chef Jessie’s show. He said he would love to learn portraiture someday. He’s already learning, he said, but needs to work on the shading and color of the face.

When he’s good enough, he said, he’d like to paint a portrait of his mom so he’ll have something to give her on Mother’s Day.

Eight-year-old Jack Vincent Atienza likes to use pastel for his works. Done mainly in his favorite color, green, Jack Vincent’s artwork on exhibit is a painting of a house by the lake. It was a scene, the boy said, that he saw in a photo.

His parents Noemi and Rick said that while discipline must be instilled early on, they give young Jack enough freedom to explore his newfound love for the arts.