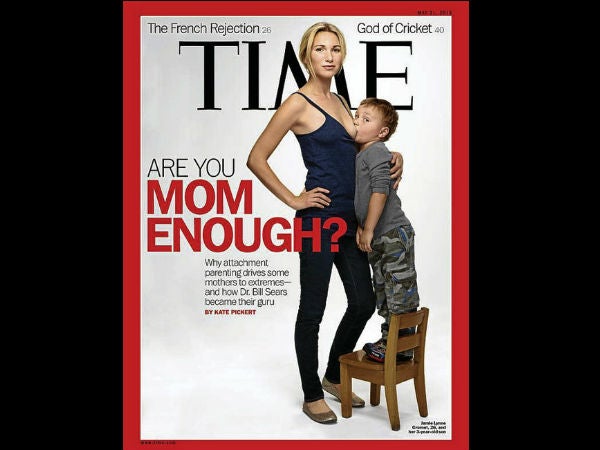 Filipino moms speak up: How extreme is extreme? 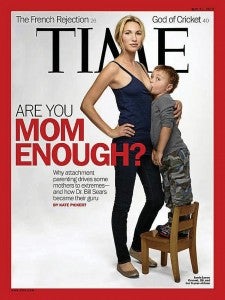 The May 21, 2012, issue of Time Magazine, depicting a mother breastfeeding her standing three-year-old toddler, has caused an uproar worldwide. Breastfeeding advocates are divided: while others claim how long the breastfeeding period lasts is the mother’s prerogative, others insist such children are being set up for dysfunction in the name of “attachment parenting.” Here, Filipino mothers speak their minds on the matter.

I recently saw the Time Magazine cover of the breastfeeding mother and her three-year-old child, and thought it was interesting. On one hand, I am a pro-advocate breastfeeding mother; on the other hand, I do see how this could shock a lot of people. There are lots of health benefits to extended breastfeeding, but I believe at some point children may need a little nudge to wean them from you.

I believe that everything boils down to choosing what is right for your lifestyle and your values as parents and individuals.

Whether it is breastfeeding vs formula feeding, attachment parenting vs non-attachment, co-sleeping vs not co-sleeping, it is really the choice you make for yourself and for your child and family, and what you are most comfortable with as a parent. No one should dictate how you choose to raise your children. At the end of the day, a happy mom is a happy baby. So if you truly hate breastfeeding, no one should crucify you for choosing otherwise.

Breastfeeding beyond one year, again, is really a choice. I personally will not be “willing” to breastfeed beyond a year, only because i don’t feel the need for it, I also want a life beyond nursing and watching what I eat! I believe that bonding with my kids can be achieved in so many other ways aside from nursing.

I’ve never been a fan of extremes so I’ve always opted for the middle ground. Breastfeeding, although ideal, is not for everyone and it isn’t fair to imply that you are less of a mom if you don’t. As a working mom who nurses, I can also see that it is a luxury; not every working mom has help to thaw and feed breast milk to a baby every three hours. Furthermore, parenting is such a subjective endeavor that you can’t put definite rules or timelines. What works for one family may not necessarily work well for another.

Although I’m more of a “to each his own” type of person, I wouldn’t breastfeed a child over a year old. I’d rather bond with my kid in other ways—taking them to the park, swimming, reading. In this day and age when moms are stretched to the limit with things to do, I find it unnecessary to add more to the mix. Especially now that more and more moms have to work as well as attend to the home, I don’t think that breastfeeding beyond the first year is that much more beneficial. The health benefits during the first year are undeniable but I find it impractical to go beyond that, especially if the mother has more than one child.

But if, for example, a stay-at-home mom has only one child and feels like this is her way to truly bond with her child, then more power to her. Breastfeeding involves a lot of self-sacrifice, so if a mother can make it work then why not? It really depends on the needs of a particular family and what would work for them.

Breastfeeding is natural, beautiful and is the best thing a mother can do for her children, its nothing to be ashamed of. Time Magazine got a lot of praise and a lot of criticism about their cover. I personally think there is nothing wrong with having an attractive woman breastfeeding her child on the cover, not all moms look tired and haggard. There is so much opinion and passion about it on talk shows and online but I think that’s exactly what they wanted—to get attention, to get people talking, to have an open discussion about breastfeeding.”

According to AAP and WHO, mothers can breastfeed their children up to two years and beyond.

Yes, it is unusual but I don’t see anything wrong about it, as long as the mother and the child are happy about it. Decision to stop breastfeeding should come from both of them and not because people around them are uncomfortable about it.

And that’s not even considering actual scenarios happening here in the Philippines, where less fortunate families who can’t afford to buy milk and sufficient food for their children breastfeed for as long as they are able to, even if their children are already two, three or even four years old.

This Time cover was meant to be controversial, a nearly four-year-old boy being breastfed in that manner with the title “Are you mom enough?” It questions the values of mothers.

I believe no one has the right to judge a mother’s love on the basis of breastfeeding alone. A mother’s love is unconditional, but when it comes to breastfeeding, to each is own. Anyone who has tried breastfeeding knows that it’s not a walk in the park and I admire women who go all out for their children. But we have to be mindful that what works for one may not work for others. I only breastfed my children for six months, does that mean I’m not mom enough? No, I don’t think so and I won’t let an article like this make me feel otherwise. Of course, sometimes I wish I was able to nurse them for at least a year but I know I made up for my shortcoming in other ways.

Having said all that, I really can’t judge the mom for deciding to nurse her three-year-old son, as I said—to each is own. I guess what am more concerned with is how we must also be mindful of other people and their threshold with the things they’re subjected to. I can imagine how seeing this in public may be awkward and uncomfortable for many but done in the privacy of their own home then that would be a different story.

I am a mother of two kids. I breastfed my son Joaquin till his sixth birthday and am still breastfeeding my daughter Amina, who is four years old now. I intend to continue this until she turns six as well. I am an advocate and practice co-sleeping and baby wearing all in relation and support to my extended breastfeeding. I so love the Time Magazine breastfeeding cover. To have a beautiful mother with such a healthy toddler, standing proud and breastfeeding, is a dream come true for me as an advocate. I have been working very hard together with other advocates to promote breastfeeding in a country whose majority of its citizen believes that breastfeeding is but a practice of those too poor to afford formula and that formula makes children gifted and healthier. Thanks to formula TV commercials!

My view on it is mixed. I am happy to be very hands-on with my kids and I am so pro for other mothers to be as hands-on as possible as well but I think this one is a bit extreme. I think that being hands-on doesn’t necessarily mean you don’t make room for your kid to grow and be independent. This photo just gives me the impression that the mom is still babying her not-so-baby son. And I don’t think it’s good for the kid in the long run. It’s beautiful that she nursed her son and we all know how hard it is to do it but this boy is a lil’ man already. He might get a rude awakening in the real world when he grows up. As we all know, not everything is handed to us on a silver platter and mommy will not always be there to help us. I just think that limitations should be set. That’s all. As a mother, you want to provide your kids with the tools they need to survive in the real world. And the real world can be harsh!

My thoughts on attachment parenting, which is what the article is all about, right? (and not really about  that skinny gorgeous mom with that naughty-faced little boy?)

If only these Americans knew that what they are describing is regular parenting, Pinoy-style. We carry our babies all the time—if not us, it’s our moms, our sisters, our friends, our yayas. Pinoy babies hardly “cry it out” because there just seems to be extra hands always to pick that baby up.

Co-sleeping? Everyone co-sleeps in Manila—it has to do with the electric bill.

Now, about breastfeeding up to three years old, I don’t think so. I breastfed each of my kids for six months each (no more, no less—equal opportunity. I didn’t want to be blamed if one kid turned out smarter than the other) and I felt that was enough. Filipinos, without being breastfed forever, are still close to their moms, from infancy to adulthood. Aha, so maybe Sears is right—maybe it’s a result of all the the carrying and the co-sleeping?

But breastfeeding up to three years old, for sole purpose of getting the kids attached to me? Are you kidding? The problem with our parenting style here is that the kids are too attached to their parents. I think kids need to learn to be more independent and self-sufficient.