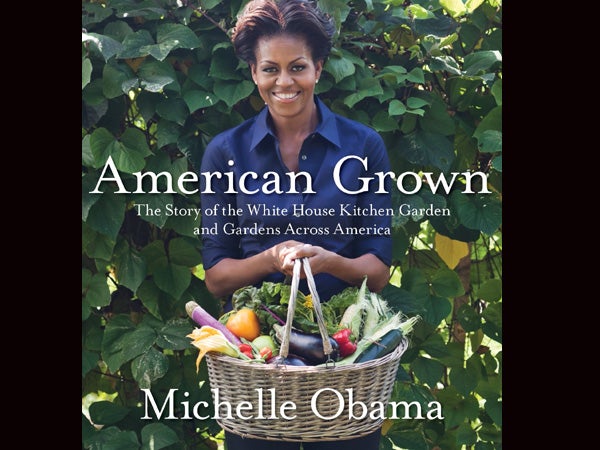 WASHINGTON—US First Lady Michelle Obama made her literary debut Tuesday with a book about the White House garden in her latest effort to promote healthy eating in a nation struggling with obesity.

“American Grown: The Story of the White House Kitchen Gardens and Gardens Across America” features the smiling mother of two holding a bulging basket of fresh produce on its cover and includes a slew of healthy recipe, anecdotes and even some childhood memories.

“It is definitely a passion,” Obama said in an interview with broadcaster ABC. “The book is a way to talk about our journey, about the challenges we face as a nation around health and what we can do to move forward.”

The book’s release comes as President Barack Obama campaigns for reelection in November and as his popular wife is seen by some analysts as a political asset.

Located on the South Lawn, the White House kitchen garden has become a symbol for the 48-year-old’s “Let’s Move” campaign that encourages children to exercise and eat well to stay slim.

Obesity is a major health problem in the United States, where one in three adults and almost one in five children is overweight.

“This isn’t about inches and pounds and how our kids look,” Obama writes in the book. “It’s about how they feel and how they feel about themselves; and it’s about the impact we’re seeing on every aspect of their lives.”

To spread the word among youngsters about the benefits of exercise and good nutrition, the Harvard-trained lawyer has not hesitated to do jumping jacks or dance with a hula hoop as cameras rolled.

“This is not about government telling people what to do,” countered Obama in response to critics. “What we know we need to do is give kids, parents, communities, the tools and the information they need to make choices that are right for them.”

Spanning 100 square meters (1,100 sq. feet), the First Lady started the White House kitchen garden in the spring of 2009 just weeks after her husband took office and moved her and their two daughters into the White House.

Since then, she has regularly invited schoolchildren to help her tend to the sprawling but carefully labeled plot that Washington visitors can spot by peeking through the railings of the White House grounds.

As for the harvested goodies, they are donated to charities that feed the homeless and have even made it onto the menu of banquets honoring foreign dignitaries.

In the 272-page work, rich with colorful photographs, Obama also talks about her childhood in Chicago and divulges that “we grew beautiful, perfectly round cantaloupes that had absolutely no taste.” It also pays tribute to projects around the country.

Among the recipes are ones for “green beans with almonds,” “sweet potato quick bread” and “white chocolate-cherry-carrot cookies.”

Published by the Crown Publishing Group, the book is available for $30. Proceeds will go to the National Parks Foundation.

Obama’s garden is the first to be grown in the White House since the Eleanor Roosevelt planted her “victory garden” in 1943.

Michelle Obama has a 66 percent favorability rating, according to a recent USA Today/Gallup Poll that saw 52 percent of those surveyed viewing her husband positively.