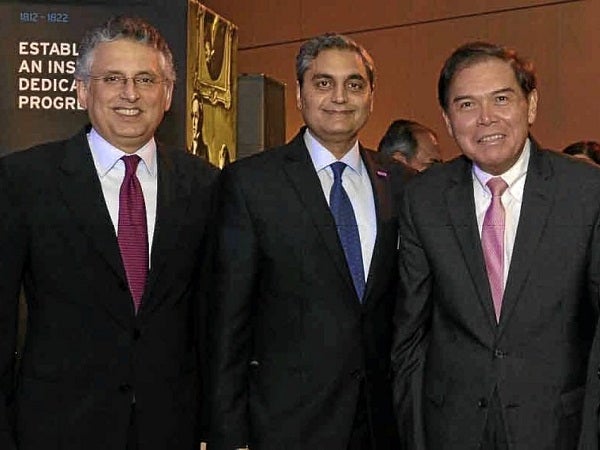 Can you believe, dahlings, that Citi is 200 years old, and it’s stronger than ever? Hey, that’s a great reason to roll out the red carpet and throw a grand bash for all its clients and business partners in the country!

Citi’s country officer Sanjiv Vohra recently did that, together with hotshot invitees, during the 45th annual meeting of the Asian Development Bank’s (ADB) Board of Governors, held in Manille.

Citi become the first private sector partner of ADB, especially in the seminar that opened the event, “Vulnerable Cities—Waking Up to the Need for Urban Disaster Management,” palanggas. Chair for Asia Pacific Shengman Zhang and vice chair of Global Banking and managing director of Public Sector Group Jay Collins were the top panelists in the ADB seminars. It was Citi that ended the ADB meeting with a huge cocktail reception where all these power players rubbed elbows with others like them, palanggas.

Moi was told that one guest, when he pulled out his wallet to tip a waiter, was told by a friend beside him: “Your wallet is so thick.” To which the guest answered, “Yes, it would be fatter, if it were not full of credit cards.” Amen to that, sir!

At the end of the celebration, Sanjiv Vohra said: “Citi is proud to celebrate its legacy of success for 200 years, and what better way to do this than by saying thank you to all of you who continue to reward us with your trust and loyalty. Today, Citi is one of the best capitalized banks in the world, and we put our financial strength for our clients whether in governments, multinationals, small businesses or individuals. A clear strategy for the future.”

All throughout this grand shebang, from the cotillion to the dance of the 18 roses, Joanna dazzled the invitees with her four ball gown changes. The gowns were created by top designers Rajo Laurel, Larry Espinosa and Francis Libiran. Her cool party outfit, meanwhile, was by Michael Leyba.

Joanna’s eldest brother, Paul Michael led the toast, while the 18 roses during the cotillion was highlighted by a candle dance, performed to the song “I See The Light.” This was followed by songs rendered by the debutante’s pals, and one by her dad Exequiel, who sang “What A Wonderful World.” Mom Matilde, meanwhile, sang “Can’t Smile Without You.” Sister Michelle, brother Mike and his fiancée Ivy, Jay and sister-in law Kit, with the rest of the siblings, all joined in, too, by serenading the celebrator with “Count On Me.”

Joanna was not to be upstaged, so she sang “I’m The World’s Greatest.” Obviously she was, at this special moment as our Princess for a Day, dahlings. Cheers!

The upscale Boracay Regency Beach Resort and Spa, the first triple-A resort in the island paradise, recently opened a branch of Mesa Restaurant at the resort’s beachfront, palanggas.

“The best of paradise has never been this satisfying with the opening of this new dining haven at Boracay Regency, Mesa Restaurant,” said Rikki Dee, to the applause of the invitees, palanggas.