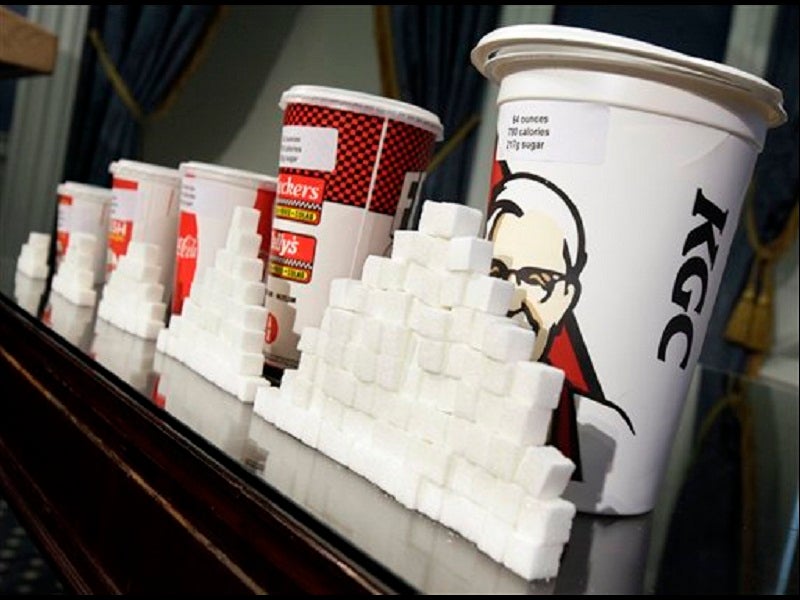 Various size cups and sugar cubes are displayed at a news conference at New York's City Hall, Thursday, May 31, 2012. New York Mayor Michael Bloomberg is proposing a ban on the sale of large sodas and other sugary drinks in the city's restaurants, delis and movie theaters in the hopes of combating obesity, an expansion of his administration's efforts to encourage healthy behavior by limiting residents' choices. (AP Photo/Richard Drew)

NEW YORK—New York Mayor Michael Bloomberg has said he plans to outlaw super-sized sugary drinks, in a ban cementing his reputation as one of America’s hardest-driving policy makers on public health.

Bloomberg, who already has gone to war on smokers and transfat, will allow the sale of cups up to 16 ounces. That’s half the size of the biggest, bucket-like container that patrons commonly guzzle from in cinemas, sports arenas and other outlets.

“Obesity is becoming the biggest public health issue in the country. Everybody is wringing their hands about it. We’re trying to do something about it,” Bloomberg said Thursday in an address by remote link to a California conference.

The New York Times first reported the ban, which could be put in place by next March.

The measure would target fast-food and other restaurants, delis, and places of public entertainment. It would not cover drinks sold in grocery stores, or any diet, fruit, dairy or alcoholic drinks.

“In restaurants and movie theaters… it’s become fashionable to sell 32 ounce cups and there’s probably more sugar in that than you would use in a normal month on drinking tea or coffee with sugar,” Bloomberg told the All Things Digital conference in Rancho Palos Verdes.

“We’re not taking your right to take away soda in supermarkets. You can still buy a 32-ounce full sugar drink, or bottle, but in restaurants they can’t serve more than 16 ounces in any one cup,” he added.

“You’re free to say I want two 16 ounce cups, but all the studies show that if the portion put before you is bigger, you will eat dramatically more than if the portion is smaller. So we’re trying to encourage people to live longer.”