Leighton Meester –‘I love it here, the weather reminds me of Florida! | Inquirer Lifestyle ❮ ❯ 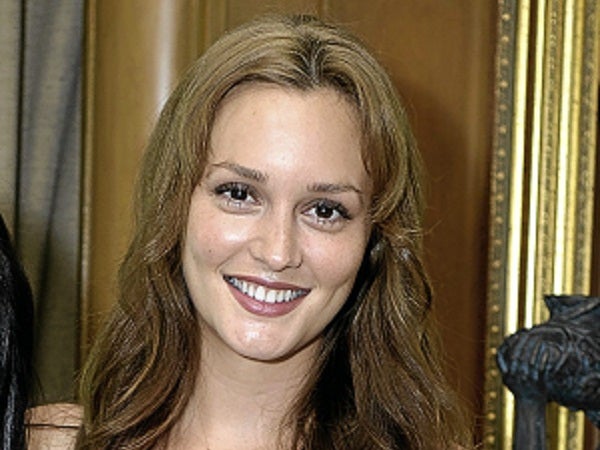 Leighton Meester –‘I love it here, the weather reminds me of Florida!

Leighton Meester breezed into the Peninsula Suite’s dining area, all bright-eyed and fresh-faced and perky. Interestingly enough, it was the same suite where we interviewed fellow TV heartthrob/Penshoppe endorser Ian Somerhalder just three days before.

We were warned that, having just arrived in Manila the night before, Meester would be tired. But the proverbial ray of sunshine in shorts sitting across from us sure didn’t look like it.

Dressed in casual chic that blended well with the summer weather, the 26-year-old Florida native seemed refreshingly different from her “Gossip Girl” persona Blair Waldorf, the sharp-tongued socialite with a notorious penchant for high-end shopping and diabolical scheming.

“I’m really, really proud to be part of the brand and to be here. Everybody’s been so nice and welcoming, so it’s great,” she said with a smile.

“I think it’s amazing that so many people are aware of the show and that you guys know about the movies and music. I think it’s so wonderful and… It’s surreal.”

Meester was in town for a surprise appearance at Penshoppe’s fashion show entitled “Impact” for Philippine Fashion Week, sashaying down the runway with Thai heartthrob and co-endorser Mario Maurer.

She is the first female addition to the brand’s “All Stars” campaign.

The campaign has also recruited Hollywood superstar Zac Efron, whose billboards are already up along Edsa.

“Leighton’s campaign will be shot in Beverly Hills, CA this June. I can’t wait for her to see the collection,” said publicist Joyce Ramirez.

An excerpt from the exclusive round-table interview:

On Penshoppe’s clothes coinciding with her personal style:

I love to be casual and comfortable. I think [Penshoppe] really is that, but also totally fashionable and put together, which is great.

On being a style icon:

I think it really began with my character on “Gossip Girl” and living in New York and working with the most amazing stylists and the people who brought these characters to life. It’s the cherry on top, you know, that makes the character really come to life. I think fashion definitely does that. The same with your hair, your makeup, just your state of mind. I’ve gotten pretty lucky  the last few years to be able to play characters that actually have great fashion sense. (Laughter)

I think in some ways I’ve had to learn this the hard way. You have to do what makes you happy and wear what you like, and be comfortable in your own skin and in what you wear.

Fashion should be fun; that’s all it is. It’s not life-or-death. You can’t be a slave to your clothes. If you’re not comfortable, you’re not gonna look comfortable. So I think being comfortable and confident in what you wear is the most important thing.

Even wearing something that’s couture, you could look like a million bucks in the outfit, or it could be a total flop if you’re just not comfortable.

I think wearing clothes that are way out of your price range is one thing that could definitely hinder your fashion sense, because it’s not about the price tag.

It’s also not about only wearing what everyone else is wearing; I think wearing what’s true to you and finding your own style is what’s so important. It’s about expressing yourself, finding what’s different about you and letting that out. Being pressured to look more mature or spend more money is just ridiculous.

I love living on the West Coast. I think it’s just so relaxing and laid-back and… warm, I think, is the best part. (Laughs) I’m originally from Florida, so I love the warm weather. If I can be in shorts and a T-shirt or bathing suit all the time, I would, which is why I like it here, the weather is just perfect for that. (Laughter) It reminds me of Florida. It really does!

I do love New York, and I think it’s really awesome to be able to go out and dress to the nines and no one will look twice. You can wear whatever you want there.

In California, I never wear heels; I always wear jeans and a T-shirt, it’s kind of just like what your taste is. But I definitely love visiting New York and dressing up; it’s fun.

Honestly, I feel like each thing I’ve done has been a dream for me. I’ve gotten to do so many different types of characters and have experiences in different places and with different people, so I’ve been really lucky so far.

It’s just a dream for me in general because I’m doing what I love and each movie is a different challenge. I hope the next movie is a character I’ve never done and that I really have to fight for.

On what she looks for in a project:

I’m attracted to a script I can relate to, that has a strong female character. If it’s something that jumps out and really inspires you and makes you want to try different things, that’s the key element, I think.

It also depends on whom I’ll be working with. You know, with Adam Sandler, it was like a no-brainer; I really wanted to work with him. I’m a huge fan of his comedy movies. I don’t know if you’ve seen “Punch Drunk Love,” but I think that’s one of the best performances by a dramatic actor I’ve ever seen.

On striking a balance between acting and singing:

It’s going to be a bit easier coming up, because I have the final season of my show to shoot. I’ve been able to write and record and do movies on downtime, but there’s been very little downtime. I think as long as I’m working, I’ll always be writing, because that’s really when I get most of my inspiration. It’s mostly on set or when I’m in a hotel or traveling and meeting new people. It’s about compartmentalizing…

On pursuing a music career:

We’ve recorded all the songs that will go into the album; it’s sort of a demo. Everything sounds great. Then we need to find a producer to attach to the project and possibly just release it independently. We’ve talked to a bunch of labels and I think it could be good, but at this point I don’t think it’s necessary.

I used to work with a label when I did pop music, and I kind of just want to do it my way now. I think it’s possible.

On touring with Check in the Dark (American folk-rock band):

It’s such a different experience, working with the band and performing. There’s no safety net; we have all live instruments, and [it’s] really my words, my lyrics, my melodies—everything is very personal to me. I think it’s going to be really fun and very interesting. We’re going to be in a little bus just driving around the West Coast in the US. (Laughter)

I’m so close to the guys in the band, so it’ll just be a lot of fun. And it’s not like a month-long thing; it’s a five-day tour. The guys just give me a lot of energy and inspiration, and they’re so talented and funny.

A girl named Dana Williams, who’s a beautiful, awesome musician I’ve actually known since we were about 10, is opening for me, too. So it’ll be like family.

On music she listens to:

I love The Shins’ new album,“Port of Morrow”—it’s really, really good. They never cease to amaze me; their melodies are ridiculous. I listen to Tom Petty all the time. I love Harry Nilsson. I love that album, “Raising Sand,” with Alison Krauss and Robert Plant from Led Zeppelin; I think that’s a really beautiful album. I love Joni Mitchell, Neil Young, Carole King.

On saying goodbye to “Gossip Girl”:

It’s bittersweet. It’s sad because I’ll be leaving everyone that has become like family to me, and New York has been my home for five years and I love it there. But at the same time, I think finishing the show on a high note is really great. It’s the end of something that’s had a huge impact on me; I’ve grown a lot and I have that show to thank for it, but I’m ready to grow beyond it.

I will always be grateful, and maybe a reunion or something at some point would be great. (Laughter) But in the meantime, you’d want to experience different things and occupy your time with different things. So, I’m really excited.