Some courts are ruling 'gay' is not slanderous | Inquirer Lifestyle ❮ ❯ 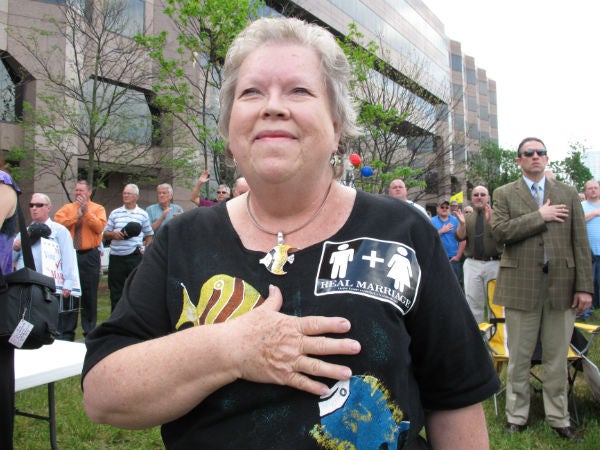 In this Friday, April 20, 2012 photo, Jennifer Cockerham, a nurse from Walkertown, N.C., holds her hand over her heart for the Pledge of Allegiance during a rally supporting a state constitutional ban on gay marriage in Raleigh, N.C. Voters decided May 8, 2012 to adopt the amendment. When President Barack Obama announced his support for gay marriage, supporters and pundits declared it symbolic of a historic shift in American attitudes. But as the attention fades, the fact remains that voters in 31 states have rejected gay marriage and more are lining up to do so. (AP Photo/Allen Breed)

Some courts are ruling ‘gay’ is not slanderous

ALBANY, New York — One by one, courts around America are deciding it’s no longer slander to falsely call someone gay — a measure of how attitudes are changing in the era of same-sex marriage and gays in uniform.

While “gay” is still widely wielded as an insult, some judges have concluded that it is not damaging to anyone’s reputation, just as calling a white man black is no longer grounds for legal action as it was a generation ago.

The latest ruling came from a midlevel New York state appeals court Thursday and was hailed by gay-rights activists as a small but meaningful victory.

The case involved a woman who was sued for allegedly spreading a rumor that an upstate New York man was gay in the hope of breaking up his relationship with another woman. In a 4-0 decision, the New York Appellate Division’s Third Department threw out the lawsuit before it went to trial, noting changing attitudes about homosexuality.

Reversing decades of legal precedents, the court said the defamation claim was “based on a false premise that it is shameful and disgraceful to be described as lesbian, gay or bisexual.”

“This word has been sort of de-fanged in some ways,” said Curtis Houlihan, a consultant from New York City who is gay. “I suppose some would say this is empowering … but that is not going to change the level of bigotry and discrimination in this country.

“But we’ll take every little victory,” Houlihan said Friday. “We can move slowly because the country is still filled with men living in the ’50s.”

Legal experts and gay rights activists say judges in other parts of the country have made similar rulings over the past several years, but tracking them is difficult because there are relatively few slander or defamation lawsuits brought and laws vary from state to state.

In 1994, for example, North Carolina’s Court of Appeals said a person can sue over being called a homosexual only if he or she can prove actual damages. The court said the law cannot automatically assume such remarks inflict damage.

“The courts are all over the place on whether it is defamatory to refer to a person as gay,” said W. Wat Hopkins, a professor in Virginia Tech’s communications department. “In some jurisdictions, a court would hold that such a reference is defamatory, and in others courts would rule as you say the judge did in New York.”

He said judges would probably consider public opinion within their jurisdiction and other factors, such as whether the state has legalized gay marriage, something New York did last year.

In the past, being called gay could cost people their jobs. For decades, homosexuality was considered akin to having a loathsome disease or being a criminal, especially since sodomy was a crime in most places.

A decade ago, actor Tom Cruise successfully sued for millions of dollars in the U.S. and Britain over false claims he was gay, arguing that the story threatened his career playing straight leading men.

In the New York case, the plaintiff, Mark Yonaty, had argued he suffered real damage from the false rumor that he was gay or bisexual. He said it cost him his relationship with his longtime girlfriend and caused him emotional distress.

But much has changed in recent years. Six states, beginning with Massachusetts in 2004, allow gays to wed, President Barack Obama has endorsed gay marriage, the U.S. military now allows gays to serve openly, and most polls show growing acceptance of gay marriage and equality, especially among the young.

“At its core, defamation is about disgrace,” said Thomas W. Ude Jr., a staff attorney for the gay rights organization Lambda Legal, which submitted a friend-of-the-court brief asking that Yonaty’s lawsuit be thrown out. “Saying that someone is gay is not an insult.”