Life’s a beach. And then you dive | Inquirer Lifestyle ❮ ❯ 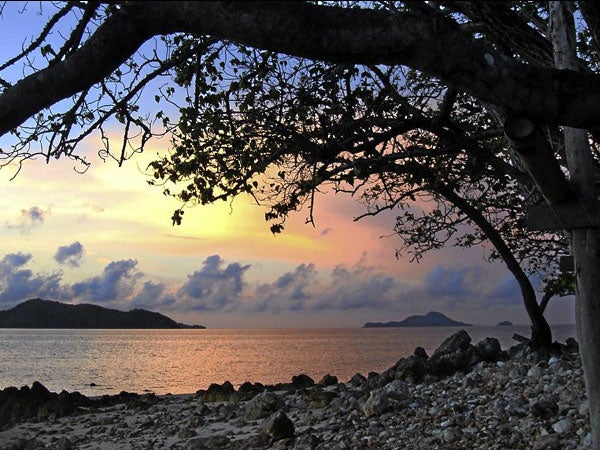 Life’s a beach. And then you dive

Swarms of fish surrounded us as soon as we waded waist-deep into Coron’s waters a few steps from the beach. Sporting stripes or spots in combinations of yellow, blue and violet, or white and red, the fish snatched with their mouths the pinches of bread that we threw at them.

The feeding frenzy must have bothered our German friend Gebhard who pleaded for us to stop feeding the fish. But we threw some more bread anyway and watched the fish drifting away after finishing our offering.

As we swam into deeper waters to view the corals, my friend Franci, 21, suddenly stood up from snorkeling and said that a fish had just attacked her. She held her fingers at 10 inches apart to show the size of the white fish that she said stared then came straight at her.

A few minutes later, her brother Miguel, 15, also rose from his snorkeling to say that a fish had bitten him. He showed us his leg with a reddish mark that he said came from the fish sting. But rather than head for shore, Franci and Miguel went back to their snorkeling farther away where they saw corals in various shapes, colors and stages of growth in the vast and beautiful Coron Bay.

It was Day 1 of our six-day stay on Dicalubuan, more popularly known as Banana Island, so called because it looks like half a banana leaf from afar. The 14-hectare island juts out from the bigger Bulusan Island in northern Palawan and is occupied by a Filipino family who rents out 10 bamboo and nipa huts that overlook the kilometers-stretch of fine white sand beach.

The sun was out that morning in late March, when we boarded a boat that cruised through clear blue waters and passed by several islands of different shapes and sizes.

Gerlie and Gebhard, parents to Franci and Miguel, who are so used to their quiet city in Germany, had looked forward to this boating trip to get away from the cacophony of tricycles, barking dogs and a babbling Myna bird that surrounded our bedroom in this Coron guesthouse where we stayed three days prior to our island trip.

For one year, Gerlie had searched the Internet looking for a place to relax, swim, snorkel and laze away the hours. Having seen and liked Banana Island from pictures posted on travelers’ blogs, she made arrangements as early as six months ago to bring her family and myself to this place.

On March 25, we arrived at Busuanga airport where a van took us to a guesthouse made of bamboo that faced Coron Bay with a view of Mt. Tapyas to its right. From the terrace, we feasted on the reflection of the sun on the turquoise water as it changed colors with its setting and rising.

On our second day, we hired a boat that brought us around Coron Island, including Siete Pecados, touted to be the best snorkeling place in that part of Coron. But at past 9 a.m. the undercurrents were so strong that they were sweeping us away from our boat.  So after 30 minutes of snorkeling, and having paid the P100 entrance fee, we proceeded to Kayangan Lake.

Kayangan Lake, said to be the cleanest in Palawan, was teeming with tourists at mid-morning.  An old man, who introduced himself as the head of the organization of Tagbanuas, briefed us before we went up 135 steps to reach a cave where one had a beautiful view of the lake.  The Tagbanua elder warned:  Be careful with your steps. Keep your silence. Don’t litter, and respect our ancestral domain.

Tagbanuas are everywhere in this pristine lake where snorkeling tourists marvel at the corals that look like pinnacles. They collect the P200 entrance fee and maintain the cleanliness and orderliness of the place despite hundreds of visitors coming daily.

At noon, we hied to the Atulayan beach, where we ate a lunch cooked by our boatman in the boat using charcoal while we were sightseeing and snorkeling.  Another Tagbanua family oversees the beach. We swam and snorkeled for a while, but mostly we rested in the beach where the only downside was the absence of toilets.  The government, the beach owner said, had ruled out putting toilets on the beach because sewage would eventually flow back to the sea. Boats, she added, are supposed to have toilets anyway.

It was off to the Skeleton Wreck after lunch, where we saw some of the biggest and most colorful corals and fishes during this trip. As expected, the fish flocked to guests who fed them with bits of bread.

The limestone cliffs on the approach to the Twin Lagoons are some of the most magnificent sights on the island.  Our boatman followed us to the snorkeling sites, bringing life vests and snorkel sets to make sure we remained safe while enjoying ourselves.  We had to shell out another P100 for the right to use the lagoon.

It had been a full day and what better way to end it but with the soothing water of the Maquinit Hot Spring, a 20-minute tricycle ride away from the town center.  A Spanish couple who has developed the hot spring charges a P150 entrance fee, but this is way cheaper than a massage therapy in the town.

Even rains won’t spoil one’s stay here, as guests can always go around town like we did and try the halo-halo at Tita Esh, buy provisions for an island stay, or visit a backyard cashew nut factory.   There are lots to do and see, as Coron town has become a hodgepodge of guesthouses, hotels, inns, restaurants, souvenir shops, tour offices and retail stores.

In fact, there’s not enough time to do everything on Banana Island.  On our second day there, we visited a nearby pearl farm owned by Hikari, a Japanese-Filipino venture. After swimming in another white sand beach left by a Korean owner to its Filipino caretakers, we passed by an island being developed into a high-end resort and went snorkeling in Bulog Dos, a half-hectare island surrounded by beautiful corals and fishes.

Our hosts said that these developments are a boon to the island as security personnel from these companies patrol the vast area around Coron, thus preventing illegal fishers from coming near. We learned that cyanide fishing was rampant here for many years, but that with more government regulation, illegal fishing has been reduced and corals have started growing again.

We went kayaking around the island on our third day, and saw Nemo, the clown fish, some baby sharks, jacks, swordfishes and other fishes playing among the corals.

When the day turned windy, we tried basketball or volleyball, or rested in the swinging hammocks. Snorkeling near the shore still yielded the surprising sight of more corals and fish.  The deep sea begins about 20 meters from shore, but even here, visibility is very good at a depth of 30 meters.

“This is the best (island) I’ve seen in the Philippines, better even than some islands in Europe like Sardinia in Italy or Tenerife or Mallorca in Spain,” Gerlie gushed. “They don’t have colored fishes like they have here nor corals. No beaches with coconut trees,” added this regular visitor to Puerto Galera and other islands in the country.  No, she wouldn’t mind coming back to Coron, she said. Already, she dreams of owning an island somewhere near.

“Even if you stay here for one month, you won’t run out of things to do,” agreed her husband Gebhard, a social worker.  He too would love to come back to these islands “if things remained natural, quiet and pristine.”

Gerlie especially liked the “personal touch” that the Filipino owners of the islands have added to the experience, as they shared their stories of joy and sorrow about island life. At the same time, they respect your privacy, she added.   She also noted the owners’ awareness of environmental issues, and how they’ve maintained the ecological health of the island, the beach and the waters around them.

Six years ago, when only ferries and chartered planes brought tourists to Coron, people had second thoughts about visiting this divers’ paradise.  If you’re not into diving, what would you do there, people asked.

But an improved airport and road network have turned things around.  From the 6,260 guests who flew in via chartered planes in 2006, the number of tourists has soared to 65,901 last year, and this excludes those traveling by boat from Manila or El Nido, according to Palawan tourism officer Dennis Alarcon. This may be paltry compared to the throng trooping to Boracay or Puerto Galera at any time of the year, but this is better than being overwhelmed by too many tourists too soon, he added.

These days, seven 70-seater planes descend on Busuanga’s airport daily, and the town has seen the sudden sprouting of guesthouses and hotels, a situation that is beginning to be problematic, Alarcon said, because Coron town has no comprehensive land use plan, and roads couldn’t be widened.

But why shouldn’t the town make haste in improving itself? Already, more tourists are making plans to come back, knowing that what they’ve seen so far is just a tiny fraction of paradise.  Coron definitely has more to offer. •

Book your guesthouse in Coron before taking a Cebu Pacific, AirPhil or Zest Air flight from Manila or Clark to Busuanga. For P150 each, guests can usually ask their host to send a van to bring them from the airport to Coron.  Boats for island-hopping can be rented in Coron. Boat rents have been standardized and boat personnel have generally been trained to deal with safety and security issues. Boat rents go from P1,500, depending on the destination and number of passengers.  Call the Calamian Tour Boat Association (+63 908 460 5415) or Joey Sabalo (+63 999 889 9515) for details.

What to pack: Travel light, but bring lots of sunscreen, sunglasses, snorkel and mask sets.