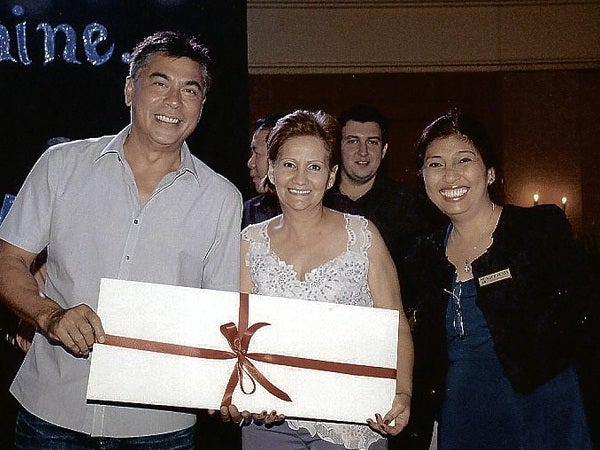 Casino Español de Cebu held a Talents Night among members and dependents. It was a big hit of an evening. Held on Monday, May 21, the event expected 100, but 200 turned up at the Casino Salon de España.

On hand to welcome everyone was the new Casino president Antonio Veloso Jr. with his wife Carla, as well as the club’s general manager May Ocaba, and Marina Codina who is director for food and beverage.

His aunt, Honey Jarque Loop, was the moving spirit behind this rollicking occasion, which turned out to be one of the most fun gatherings the Casino has ever seen. She asked Bunny Pages to emcee the program with his usual finesse and panache.

Honey gave a short speech where she thanked immediate past president Rico Gandionco for his all-out support. Preparations had been underway since early March and the results were evident.

Opening number had Tessie Javier doing the Jealousy Tango with Loloy Rendon, who has obtained over 600 medals for his dancing prowess. Seventeen more numbers came in quick succession, their sequence drawn by lots.

Paco and Monique Jarque performed “The Lady is a Tramp” from “Pal Joey.” Sofia Miren Jordana sang a song from “Les Miserables.” Monica and Jordana Ouano did a dance from “Burlesque” with grandma Monina Pacheco Ouano cheering up front with a caboodle of smaller grandkids.

Del Ordoñez wowed the audience with his renditions of “Impossible Dream” and “Because You’re Mine.” A revelation to all, including his own family, was my son Jimmy who belted out “Smoke Gets In Your Eyes,” and earned a standing ovation.

“Had I known, I’d have prepared an encore,” he quipped.

There was classical music from Rene and Joy Kintanar. He played the cello, and she accompanied on the keyboard “Salut d’Amour” by Elgar and “Estrellita” by Ponce. Some hummed along, while others tried to fit the lyrics of “Estrellita.”

Rory Fernandez sang a modern song, accompanying herself with a guitar, and followed that with a solo piano rendition. Narsing Solon closed Part I with his version of “Misty.”

There was a surprise number as 10 staff of the Casino Español appeared on stage to perform a medley of Original Pilipino Music, complete with effective impersonations. There was Marina Codina swaying a la Pilita with “A Million Thanks” and Titing Calesa mimicking Yoyoy Villame.

The program continued with a song from Daniella Go, another song from Monica Ouano, a hip-hop dance by Jordana Ouano, solos from “Phantom of the Opera” by Carla Larrauri, and “The Hero” by Leigh Ramos, who at the start of the evening had sung the invocation, a rather lengthy “Prayer.”

Enter the Java Hoopers, totally in black with white masks to cover their identities as they pranced to more hip-hop. We found out who they were: Luis and Lyn Moro’s Ma. Antonia, Ma. Ysabel, Luis and Raphael; Francis and Angel Llaban’s Rya and Zia; Sonny and Annabelle Alo’s Sofia and Ariana.

It was now time for the grand finale. Most everyone thought it would be Il Divo. “El Vivo, El Vivo,” corrected the program host. No matter, four dashing gentlemen went up to sing “A Mi Manera,” which is Spanish for “My Way.”

Much-applauded were past presidents Glen Loop and Rico Gandionco, VP Editho Tirol and Laureano Rogero. They obliged with an encore—“Somewhere” from “West Side Story.”

For all performers, there were souvenir plaques with a bright golden star. They all gathered on stage and asked the audience to sing along with them Abba’s “Thank You For the Music.”

Amparito and Michel Lhuillier, who were among the most enthusiastic in the audience, asked when is the next “Casino’s Got Talent” night. They’re ready with a boogie-woogie number, they said.

“We’ll let you know,” said Honey Loop to everyone who asked the same query.

Next grand event at Casino Español de Cebu will be the celebration of Dia de Santiago come July, dubbed as Spanish Month for the club and its members. Invited to grace the opening is Spanish Ambassador Jorge Domecq.