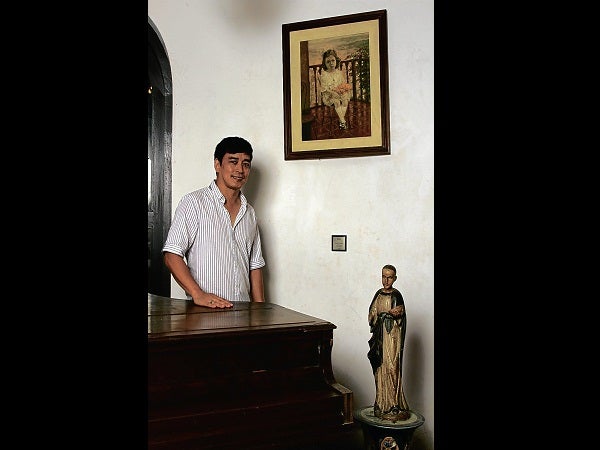 Headless figures and wild horses, roiling in chaos, seemed to express the human condition with violent directness. Titled “U-Turn,” this monochromatic mural, an allusion to the Apocalypse, became a turning point for artist Antonio “Tony” Leaño. It won him first prize in the first Metrobank Foundation National Painting Competition in 1988.

With the prize money, he was able to give up his jobs to become a full-time artist.

When art patron and gallery owner Dr. Joven Cuanang saw the obra, he was drawn by the convulsive representational figures and the powerful symbolic references.

“I like intense people,” said the neurologist/medical director of St. Luke’s Hospital. He has since been a collector of Leaño’s works.

They have also been collaborating on the development of Cuanang’s Pinto Art Museum in Antipolo, which has evolved into a major tourist destination.

Leaño was more than happy to have a patron who understood his idiosyncracies and gave him full creative freedom. Cuanang described the artist as a polymath.

“As an artist, I want to create. My career path doesn’t have the same template as the others. I want my life to be meaningful,” said Leaño.

“I do the whole spectrum, from two- and three-dimensional works to installations, architecture and landscaping. My contemporaries focus on one genre—painting. This makes it easy to follow their careers. The public is used to seeing the artist doing one thing. I can’t force myself to do that. When I was young, I experimented a lot. I was like Da Vinci who had varied interests.”

Born on Sept. 19, 1963, Leaño hails from Cagayan, where images of its Old World architecture are imprinted on his mind. They later emerged as inspirations for the Pinto Art Museum.

He credits his mother Petra for cultivating his penchant for gardening. Since 1978, he has been living in Antipolo.

His memories of childhood revolved around art, although he never thought he would have a future in it.

After high school, his mother encouraged him to learn engineering since he had the acumen for math and science.

One day, a cousin told him about a talent test for the University of the Philippines College of Fine Arts. Naive about a career in the arts, Leaño took the test and ended up in the Top 3.

Although he enjoyed the fine arts course, he was unable to graduate for lack of minor academic subjects.

In the ’80s, Leaño worked as illustrator for Channel 13’s children’s show “Kulit Bulilit,” an art director for a paper products company and as graphic artist for Botak sportswear.

After winning the Metrobank contest, he immersed himself in his art and hardly did commissions.

Through the years, he has created potent works that explored the mundane narratives of urban living and other fragmentary aspects of human life. He imbues his work with a sense of urgency in the way figures are tensed up. His images rouse viewers not to be complacent about what’s happening around, but to have the power to make sense of the world.

“Supremo,” a mural depicting the savagery of animals eating the brain of a human, now belongs to the Fukuoka Museum in Japan. It was Leaño’s allusion to how the human intellect has degenerated into animal levels.

“The Last Full Show” portrayed naked women with splayed legs and decapitated torsos—a commentary on how films could subliminally corrupt the mind. It was showcased at the Osaka Triennale in 1993.

“U-Turn” was a major focal point in Cuanang’s residence. The gripping statement on human turmoil has been replaced by Leaño’s painting of a sepia-toned mother and child at the turn of the 20th century.

Leaño had rendered a series of these soft-focus period works, inspired by old photographs and postcards during the country’s Centennial year celebration.

These works showed another side of the artist.

“The preparation base is different. The quality of the brush and technique is different,” he said. He likened the style to how acid eroded photographs, resulting in brownish images.

Leaño studied a photograph of Jose Rizal’s execution in Babumbayan. “I would analyze the trees and plants in the background. Behind Rizal were bamboo, narra and talisay. The direction of the wind came from the bay… It was like doing ‘CSI.’”

Beyond his drawing and brushstroke skills, Leaño could also go conceptual. He has made collages using various mediums, which by themselves ask the viewer to figure out the layers of meaning. A striking work is a plexiglass panel with a matrix of dextrose straws and coconut fiber for a background.

In Japan, he created an installation composed of writhing branches growing out of the walls. The spectators were invited to view them from a plexiglass cubicle which had sound effects of trickling water. The title, “Intelligent Man Rethinking,” was his version of introspection.

“Clients don’t understand. After they see the last exhibit, they don’t know I do other projects which, to them, is not art. But that is how I am. I do what I do,” said Leano

The Pinto Art Museum is Leaño’s biggest work in progress. It all began in the late ’80s when Leaño became an artist-in-residence at Silangan Gardens, home of the Silangan Foundation for Arts, Culture and Ecology led by Cuanang.

Seeing the potential of the property, Leaño laid steps and built pathways, transferred plants and gathered new ones from Antipolo. When Cuanang came home for the weekend, he would be delighted at the changes in the landscape.

Meanwhile, Leaño met his future wife, Maria Miciele Dominique, a dentist. When she came to Antipolo for medical missions, she and her friends would visit Silangan Gardens. That was how they met.

Leaño considers his daughter, Angelica, as his other great work of art. The 12-year-old graduated valedictorian at De La Salle Antipolo. “She loves to draw and write. She reads a lot and she’s good in math,” he said.

In 2000, Leaño was tasked to build the Pinto Art Gallery, which drew inspiration from the adjacent Cuanang residence. Cuanang based the design of his house on the colonial influences in his province, Ilocos Norte—massive concrete with unadorned whitewashed surfaces, wide eaves, cross-ventilation, brick walls from Ilocos and tiled flooring.

A stairway sweeps up to the viewing deck which overlooks the pool and beyond. To create a visual continuity, Leaño incorporated the masonry, the arches and unadorned walls into the gallery.

References from colonial architecture contradict the spareness and primitiveness of the materials and surface treatments.

The same treatment was carried out in the expansion of the Pinto Art Museum, which houses Cuanang’s vibrant modern art collection.

What makes it unique is that Leaño deferred to the sloping, uneven terrain instead of leveling it. He organized the spaces so that visitors can savor prodigious and varied views. Roof decks hover above the stone walls to maximize the visitors’ pleasure of the eye-filling milieu.

Cuanang said Leaño could articulate the neurologist’s ideas and take them to another level.

“When we were planning the museum, I told him I wanted a warehouse so we don’t spend much. I’m Ilokano. Tony worked within the budget and infused details that made the difference,” he said.

When people come over, they appreciate the geometry of the staircase, the dramatic use of down spouts, the coherent whiteness of the buildings—all belying the complexity with which they are connected and how the garden and galleries resonate with each other.

Around a cluster of galleries, fruit trees soar to the sky. Leaño said the garden is at its best before the rainy season. Herbaceous plants burst out of beds around the buildings. The sculptural shapes of the yuccas, bromeliads, agave and yucca play against the colors of the lantanas and hibiscus.

Mango, avocado and bamboo trees line up to catch the slanting afternoon rays of the sun.

“When I went to Japan, I took a side trip to look at the gardens of Kyoto. They are so meditative. I try to incorporate my artistic sensibilities in the landscape design. Plants are used not only for their flowers or function but also for the hues of the leaves. They become the pigments in an artwork. The plants are arranged in a way that allows you to see the tonal differences and the play of sizes and textures.”

Leaño is working on a new 1,000-sq-m wing set to open in December. The new wing has the same shell as the rest—with a ceiling made of galvanized iron sheets for an industrial look. However, it has the same tegula design that runs through most of the museum’s rooftops.

Like the old wing, the building is traditional in concept, with antique windows, doors and posts from Ilocos. Yet it is contemporary in its abstraction and minimalist, monastic detailing.

He views the Pinto Art Museum as his contribution to the community. “My work goes beyond being an artist. I’m not just concerned about the architecture. I did everything to create an atmosphere where you can enjoy the art and the scenery.”

In art and architecture, Leaño simply conveys universal themes through local subjects and materials that offer new perspectives. His works awaken people to appreciate life and not take the world for granted.