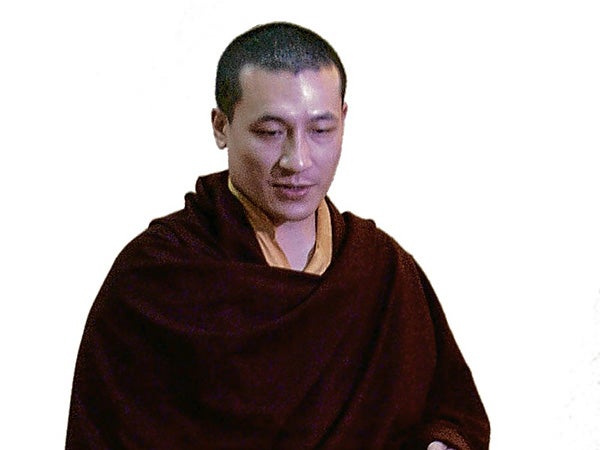 Tibet Buddhism’s 17th Karmapa is one of two

The visit to the country this week of an eminent holy man has highlighted a controversial issue within the Karma Kagyu, one of the four major schools of Tibetan Buddhism.

Trinley Thaye Dorje, hailed by his followers as the 17th Karmapa—officially His Holiness the Gyalwa Karmapa, or the head of the Karma Kagyu school—is visiting the Philippines in the course of an extensive tour of Southeast Asia and Europe. This is Thaye’s second visit to Manila.

Karmapa is a referential term meaning as who embodies the activities of the Buddha or the “Enlightened One.”

In an elaborate dinner ceremony three years ago, Manila Mayor Lito Atienza gave a symbolic key to Thaye, at the time a young man with very fair skin and a longish face whom the event’s organizer, the Philippine Nedo Kagyu Dharma Foundation, hailed as the 17th (reincarnation of the) Karmapa.

At the Singapore stop of his current tour, Thaye was asked about “the other Karmapa.”

Because of a controversy within the Karma Kagyu school over the recognition process, the identity of the current 17th Karmapa is disputed.

Thaye shares the “His Holiness” title with Ogyen Trinley Dorje, also hailed as the 17th Karmapa. To their respective followers, each one is the 17th Karmapa and they seem to have peacefully coexisted as such for years. To this day, although they both live in exile in India, they have not met.

Apparently, the Singapore interviewer noted, the question about “the other Karmapa” is something that Thaye is used to being asked. His reported “very calm” reply was that if the teachings were authentic and the followers were benefited, then whoever uttered the words must be a great teacher—and that’s all that should matter.

Susana Ong, a member of the core team of the local Karma Kagyu center, adds: “We are taught that if we were to see the other Karmapa, we should prostrate ourselves before him, since he must be a person of great merit to be so exalted.”

At a welcome dinner last Friday at the Enderun College on McKinley Hill, Thaye, 29, captivated followers and admirers gathered at the covered court with his movie-star form and regal bearing. His vaunted serenity certainly helped the rained-out event proceed on an even keel.

His eyes were alert but soft, a state usually achieved only after years of meditation practice. The half-smile—the same one he wears on tarpaulins installed along the length of Roxas Boulevard and in areas he will be visiting this week—never left his face. He wore maroon-and-orange robes just like the other monks in the gathering but there seemed to be a spotlight where he sat at the head table; in fact, there wasn’t.

Thaye spoke extemporaneously in English. Apart from the requisite monastic training, he is said to have received a modern Western education from English and Australian tutors. He briefly discussed such timely and intriguing subjects as reincarnation, the nature of happiness, every human being’s “three selves,” and the consequences that human beings now face for abusing the environment.

“Happiness depends on the need of every moment,” he said. “People with strong connections and enough respect for each other will always find one another.”

There is such a thing as a law of impermanence, he also reminded his enrapt listeners. “We bring nothing to this world and will take nothing when we leave.”

The two Karmapa were separately enthroned as children after what might be described as parallel “processing.”

Ogyen was enthroned on June 30, 1992 in Tsurphu Monastery in Tibet, traditional seat of the Karmapa. Thaye was enthroned on March 17, 1994 at the Karmapa International Buddhist Institute in New Delhi. Both are said to have proclaimed before they were a year old that they were the reincarnation of the 16th Karmapa, Rangjung Rigpe Dorje, who died in 1981.

The people who officially recognized the two young leaders seem to be at the heart of this issue.

There are four main schools of Tibetan Buddhism-Nyingma, Kagyu, Sakya and Gelug. The Karmapa lineage is believed to predate all others in Tibetan Buddhism. The Karmapa were the first spiritual leaders to begin a succession of rebirths to continue the work of those who came before them.

The first 16 Karmapas had been recognized unanimously by religious leaders and teachers. The double enthronements of Thaye and Ogyen divided the house.

Thaye, descendant of a noble family whose father is also a revered lama (religious teacher) was initially recognized based on a dream by the 14th Kunzig Shamarpa, second highest lama in the lineage and said to be a nephew of the 16th Karmapa. Historically, the Shamarpa is the person most directly involved in the process of recognition.

Ogyen, son of nomad parents, was recognized by other influential Karma Kagyu seniors, some of whom he is said to have correctly identified during the process of investigation. He has since been officially recognized as well by the Dalai Lama, head of the Gelug school and acknowledged Tibetan religious and political leader, who also said Ogyen’s identity had come to him in a dream.

(Thaye’s followers protest that it is traditionally not the Dalai Lama’s place to recognize the Karmapa.)

Ogyen is also the first tulku (reincarnate) to be recognized by the Chinese government, who gave him the tag, “Living Buddha.”

Ogyen’s acceptance by China was seen as a “bad precedent” and in 2000 at age 14, he was smuggled out of Tibet—on foot, on horseback, and finally, by air. He would later say that he had to “realize his full spiritual authority,” which was not to be easily achieved in Tibet. He currently resides at Gyuto Monastery in Sidhbari, near Dharamsala.

Tibet has been an autonomous region of China since 1965. When China gained full control of Tibet in 1959, the Dalai Lama escaped to India. He remains in exile like the two claimants to the 17th Karmapa title.

Free-Tibet movements around the world continue to stir sporadic protests against Chinese occupation.

Only a minority accept both claimants to the title as legitimate reincarnations of the 16th Karmapa (this reverential term means one who embodies the activities of the Buddha or “Enlightened One”).

At least three young monks of this persuasion—one said he had flown in from India—were present at the dinner on Friday. There being two Karmapa didn’t seem to be cause for the slightest concern. “If there’s more, it’s better for all,” was their common sentiment. But not one of them would give his name to the Inquirer.

Thaye reportedly has two million followers worldwide—about as many are estimated for Ogyen. In Manila, their followers have one center each. Thaye has 45 devoted Filipino students, mostly of Chinese descent; Ogyen just a little less.

Thaye, who fled Tibet with his family in 1994, is currently based in Kalimpong, India where he continues his traditional education for a holder of the Karmapa title. In 2006 he was officially appointed by the Karmapa Charitable Trust as legal and administrative heir of the 16th Karmapa. This allows him to live in the Rumtek Monastery in Sikkim, a sacred site for the sect. However, because legal proceedings between the supporters of the two candidates are ongoing, Kalimpong continues to be this Karmapa’s headquarters.