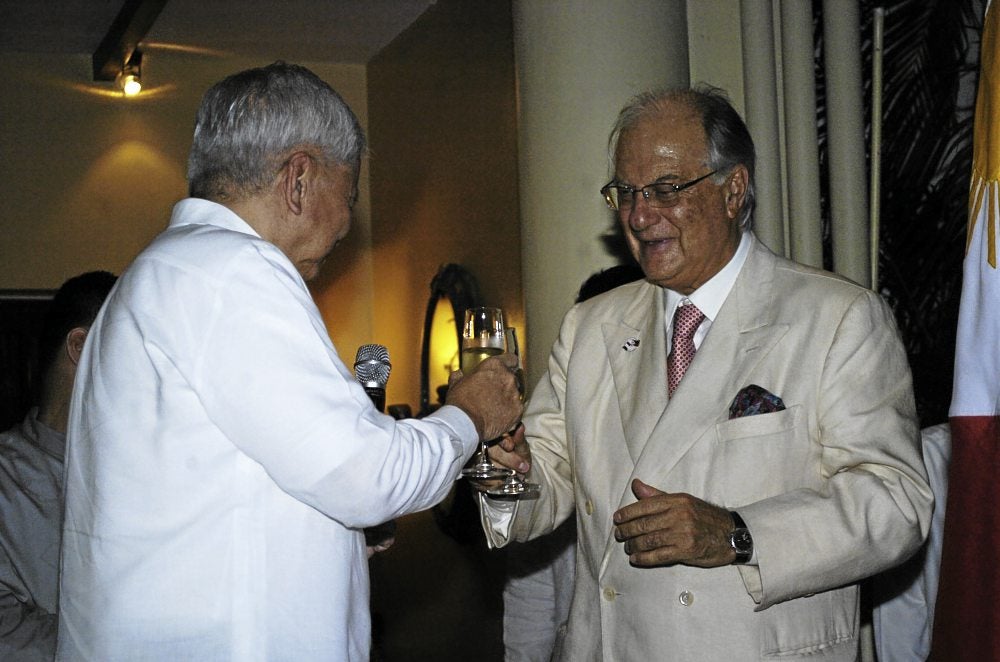 The diplomatic corps, the culturati, the café society and the Italian religious groups flock to the ambassador’s residence in Dasmariñas Village, Makati, like they did last Friday.

The big number of guests caused the gridlock in the streets. Some foreign guests got off their cars and walked to the ambassador’s residence, with umbrellas over their heads.

Everybody obviously was looking forward to the abbondanza experience.

The main event was the food, prepared by Margarita Forés and her chefs from Cibo di M, plus the pasta demo by Carla Brigliadori, an instructor from Casa Artusi, the newly opened culinary school for Italian cuisine. (Bacchus supplied the salami and other cold cuts.)

It also brought to the fore the partnership between Italy and the Philippines, with the recent establishment of Casa Artusi Philippines.

The most definitive feature of the Italian entertaining style and décor is the strong bond between the home and the earth and nature. The Italians have a way of connecting to their environment. Everything is effortlessly synchronized to create an atmosphere that’s warm and comforting.

Forés’ signature rustic arrangement of entwined vines that cradled cauliflowers, colorful peppers and tropical flowers was a counterpoint to the metallic cocktail tables.

The main tables burst with vivid arrangements of green apples and oranges juxtaposed with candles. The advantage of such an edible arrangement is that the food can be cooked after the party, not thrown away.

A grand canopy was built over the garden to shelter the guests from rain. The ground was laden with Oriental carpets.  A mini Italian galleon floated in the pool.

Live jazz music, a favorite genre of the Fornaris, wafted in the air. A roving saxophonist played nostalgic songs as the guests nibbled on gnoccho squares and savory crepe cakes and sipped their Spumante.

Layered sandwiches with truffle butter and Forés’ signature barquillos with cream mousse and salmon roe were passed around.

Eight major food stations were spread out so that people could experience an Italian gastronomic journey of antipasti, panini, pizza, pasta, meat and dolci. They were prepared in the Italian tradition—the use of the best ingredients.

The translucent sheets of beef carpaccio were pink; the porchetta was prepared Sardinian-style, deboned and roasted in its own juice.

Vegetarians enjoyed the eggplant and zucchini rolls, crispy squash flower and mushroom fritters and asparagus coated with perfectly crisped bread crumbs. The pizza margherita was given a twist—fresh arugula lent the bitter flavor.

The caramelized cambozola was an arresting sight with its feathery textures and fresh fruit topping.

An anteroom was dedicated to pasta prepared by Casa Artusi and risotto. The Cibo di M chef tossed hot risotto inside a giant ball of cheese and flavored it with gorgonzola and pears.

Meanwhile, the Italian guest chef prepared the special capelletti, a pasta with peaked hats with a tasty filling. The tortellinis, tagliatetellis and raviolinis were golden yellow and firm.

In the garden, guests enjoyed the variety of Italian dolci, the dense slab of chocolate torte, sweet dough fritters and the famous cream gelato, done under the supervision of Fr. Giovanni Gentilin in Tondo. They were served in martini glasses.

The event would not have been complete without the famous Baba Au Rhum, the potent rhum cake, prepared by the embassy chef.

The abundance and festivities prompted an Italian to say, “Viva Italia!”