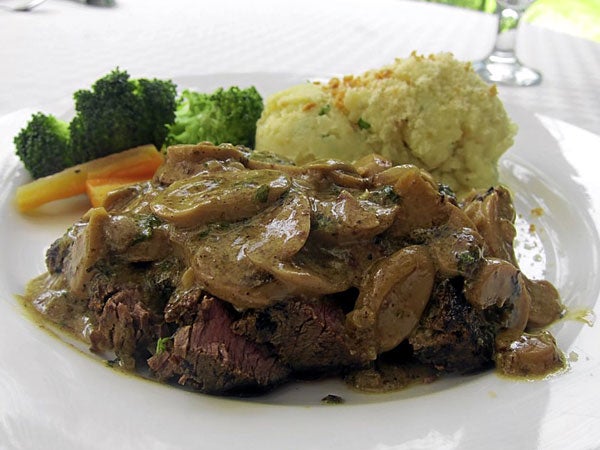 A Signature That Satisfies

There are restaurants that take your breath away by the sheer value of the setting. Heavy curtains, fine china, expensive art and fancy utensils that in truth are valued more for their prettiness than for the purpose they serve. Restaurateurs pour investments that reach the tens if not hundreds of millions just to create a sense of escape for guests. Sometimes they are blockbusters; occasionally, they flop.

Then there are the fabulous indie films of the restaurant world: Fat Michael’s, Van Gogh is Bipolar, Cookbook Kitchen. The most recent addition to this list is a 2011 creation in Sikatuna Village named Chef Tatung’s.

The Quezon City maze that you must put up with to reach this final destination is not for the faint-hearted. Even the Good Doctor, usually an expert on the UP vicinity and contiguous areas, surrendered: “It’s impossible to give directions. When you reach CP Garcia, just turn right at the stoplight then ask the tricycles where Matipid Street is.” And I thought in frustration, “Sa bagay, mahirap naman talagang maghanap ng Matipid ngayon dahil lahat Mahal na.”

Frustrating as the drive is, when you reach Chef Tatung’s, you will feel a sense of calm. It is an old house with ’60s-style architecture complete with floating stairs, but it emits a warm, welcoming vibe. You can almost imagine the kids growing up in this house, enjoying their Magnolia Chocolait straight from the bottle and watching “Uncle Bob’s Lucky 7 Club” on a television set with a dial instead of remote control. A few years later, you’d imagine them playing guitar in the living room, singing APO songs or emulating the Tilt Down Men.

You may opt to be seated indoors but for a more romantic ambience, there is the garden. During the day, the heat may dissuade such opportunity but in the evening, it is a beautiful setting for a first or otherwise important date.

The restaurant is as humble as it is homey. During lunch, you may find the chef both manning the tables and cooking in the kitchen. The upside of this is the opportunity to converse with him.  “Chef, parang one-man act tayo ngayon ah (it looks like a one-man act today),” I teased as he brought out electric fans to counter the midday heat. The downside is that the main course, especially if you are a big group, may take a little, or rather, a lot longer than usual.

But the wait is not wasted. The hands-on restaurateur guarantees that his signature satisfies. The bread is home-made and achieves the lingering taste of slightly burnt toast. The salad is as eye-catching as it is mouth-watering with crisp greens and tart yellow mangoes. Between courses, Chef Tatung explains, “We use herbs straight from the garden but since it’s been raining a lot recently we haven’t been able to use them too much.”

The fillet mignon could try a little tenderness but the mushroom and truffle oil sauce that accompanies it is delightful. It is reminiscent of beef stroganoff. Similar flavors are found in the chicken mushroom pasta.

But the most impressive of the dishes is the gindara. The fish is grilled to bring out its full flavor while a coconut sauce gives it a creamy finish. It’s not ordinary coconut sauce though. It is more like a salsa with tomatoes, lemon grass and shrimp. The flavors are so Asian! A bit Bicolano, a bit Indonesian, a little bit Thai. The chef should definitely go more towards this direction as he develops his menu further.

This restaurant is the kind that would be much appreciated by those who are always in search of out-of-mall restos that have character. A regular a la carte menu, as opposed to the set menu, is being tested this July. Walk-ins will also be entertained, as opposed to the previous set-up that required reservations. Don’t expect air conditioning but you can ask for extra ice for the sweet calamansi juice. Most of all, you can expect hands-on tender loving care from the chef himself. The restaurant carries his name and from the hard work I witnessed, it appears he is really making sure it is a name that will be synonymous with good cooking and good food.

Chef Tatung’s. 17 Matipid St., Sikatuna Village, QC. Tel. 352-6121 or 0915-8463234. Reservations recommended. Cash basis only. Wheelchair accessible. Open for lunch and dinner. From the Anonas-V. Luna intersection, go down the street of Save More. Matipid is four corners from the intersection, then turn right. Website: www.cheftatung.com