Why the Filipino traveler is drawn to Montserrat | Inquirer Lifestyle ❮ ❯ 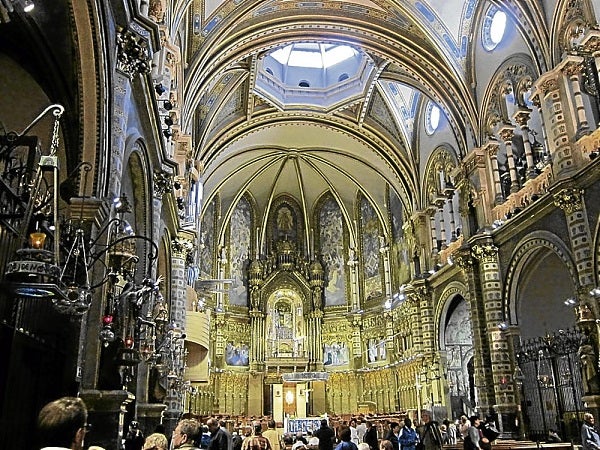 Why the Filipino traveler is drawn to Montserrat

It wasn’t even in the original itinerary, but apparently this visit was meant to be. It proved to be a memorable finish to our trip to Spain barely four weeks ago.

The night before our departure for Manila from Barcelona, Vien Cortes, market analyst (Southeast Asia, Australia and New Zealand) of Spain Tourism Board, which was our host, announced that there would be a side trip to Our Lady of Montserrat mountain shrine northwest of Barcelona, less than two-hour drive. This would be in the morning; our flight back home was in the afternoon.

After a grueling 10-day tour of Barcelona, Madrid, Santiago de Compostela and its environs, we were just about catching our breath. But then, would we miss what could be a once-in-a-lifetime chance to see this shrine we’ve heard about so much, even from San Beda Alabang students who wrote about it in 2bU?

“No, we go. It’s the Virgin,” Rita Dy of Singapore Airlines, our trip’s carrier, said, in between coughing. “I’ll just rest and recharge tonight.” Her determination was obvious.

Turned out, the last-minute trip to Montserrat was the “recharging” itself that we needed.

The sight of the rock mountain that loomed before you was awesome. In hues close to terracotta, the mountains had this odd, organic shape. They had been described as cone-shaped, yet they weren’t really. Their peaks were rounded, not pointed; their shapes were rotund, voluminous and irregular—root crops came to mind. The concrete earth-tone structures of the Monastery resting against them complemented this odd geometry of nature and man, of the natural and the divine.

This was the vista that greeted you as you stepped out of the train that brought you to the Monastery peak. Nature was awe-inspiring, but you knew right away that even more mystifying would be the sight of the Monastery, the icon of the Virgin and knowing the ancient lore built around it.

It is written that pilgrims had been coming to this mountain shrine since the 12th century. Among them were a hermit, Bernat Boil, who accompanied Christopher Columbus to the New World where he became America’s first missionary, and St. Ignatius, who visited it as a knight and made his confession to one of the Benedictine monks in the shrine. It is written that after a night of prayer before the image of Our Lady of Montserrat, St. Ignatius turned a new leaf and founded the Society of Jesus. A few miles away from Montserrat is Manresa, a pilgrim shrine of the Society of Jesus. There in a cave, the belief goes, St. Ignatius Loyola retreated from the world and wrote his Spiritual Exercises.

It comes as no surprise then that Filipinos are drawn to this pilgrimage site, at least the many who learn about it by word of mouth. Filipino travelers who have affinity to the Benedictine monks and the Jesuits—Bedans and Ateneans, in particular—are wont to visit the site; in fact Smart VP Mon Isberto (a La Sallite in a so distant past) reminded me to visit the shrine after he learned of my Barcelona trip.

Our visit was quick and short, but fortunate, if not blessed. We were just in time for the noon High Mass being celebrated by the monks in the Basilica. I hadn’t gone to a High Mass for some time, and even more remote in my memory was a Latin Mass, which I was hearing that morning. The singing and chanting of the monks enveloped you in a solemnity and solace that supplanted your travel fatigue.

It is said that the basilica also holds the world-famous 50-member Escolanía, one of the oldest and most renowned boys’ choirs in Europe that was founded in the 13th century. At 1 p.m. daily you can hear them singing “Salve Regina” and the “Virolai” (hymn of Montserrat) in the basilica.

We didn’t get to listen to the choir, but were privileged to experience something better. Right after the Mass, we were led to the back of the basilica. Incredulous, we were told by our guide that we would be brought up close to Our Lady of Montserrat, the black icon that has been venerated for centuries, and to whom countless miracles have been attributed.

We climbed the stairs to the side of the church and entered a big room. This room, we’d read later, is called the Camarin de La Virgen (Chamber of the Virgin). From there it was only a short walk to the alcove housing the seated statue of the Virgin. Before we knew it, there was the Virgin to our side. We couldn’t believe our intimate proximity, yet we knew right away. Why? We felt it—it was a very palpable vibe that stirred you to the core. This, even if our mind was tired and our mode wasn’t yet of veneration. Nothing could prepare you for the experience—this providential meeting—it turned out.

“Masyadong malakas,” Rita Dy and travel agency head Marget Fernan Villarica of Cebu would tell me later of the vibes they felt in that alcove. So I wasn’t imagining it—the feeling was indeed overpowering.

I glanced at my side, at our Indonesian media colleague, a man. He was visibly trying hard not to choke with emotion. In a split second, he was shedding a tear. We would learn later that he was Catholic and almost became a Jesuit. He would tell us that that was the first time in many years that he cried; he was that overwhelmed by the Virgin’s presence.

The icon of Our Lady of Montserrat is black, thus she is also called the Black Madonna or La Moreneta (Dark Little One). Christian lore has it that it was carved by St. Luke in 50 AD. (See history in box.)

It is barely three feet tall, made of wood carved in the Romanesque style and rendered black by centuries of constant exposure to the candles lit by millions of devotees. Or the ravages of time could be the simple explanation for its blackened finish. The statue is of a seated Virgin, the Child Jesus on her lap.

Her face is elongated, her dress a carved draped cloth. Beneath her crown is a veil of stars, squares and stripes. Her right hand holds a globe. Her feet rest on a carved cushion. She’s seated on a chair.

The image is extensively described in literature—which is how we got those details. Our brush with the image was only a few seconds—too fleeting for us to note the details of her features—yet it was a powerful experience.

It is no wonder then that millions of tourists visit this shrine every year.

The shrine has a museum that displays important European art including the paintings of Caravaggio, the famous Italian artist whose life was as tormented perhaps as Van Gogh’s and thus his works were as riveting. The Montserrat museum also houses a mummy from the time of the pharaohs in Egypt.

Visitors stay in the shrine for as short as a day or as long as several days or even weeks. Its hostel has the amenities of a hotel and its restaurant is in the Michelin guide.

This restaurant was a stable in the olden days. It now serves fine meals, including the iconic Spanish fare such as tapas and paella. Interestingly it was here that we tasted our trip’s first good old Spanish paella—after nine days of gustatory tour of Madrid, Barcelona and Santiago which brought us to many 2-star Michelin restaurants that adhered to molecular gastronomy. After noon-and-night dining in such cutting-edge restaurants, we welcomed this traditional paella—a fitting finale to our trip.

The Montserrat Shrine appeals to pilgrims or world-weary souls who want to get off—if only momentarily—from a world that can’t seem to ever stop. Whether you are religious or not, it is a retreat into the mountains where you can take long walks, find security in the solemnity of the rites of the Benedictine monks, or simply enjoy some rest in its hostel.

After you have marveled at Gaudi’s incredible architecture of Sagrada Familia, walked the garden of Parc Guell, visited museums in Barcelona and have shopped beyond remorse, a visit to the mountain shrine of Montserrat is your moment of peace, albeit accidental peace.