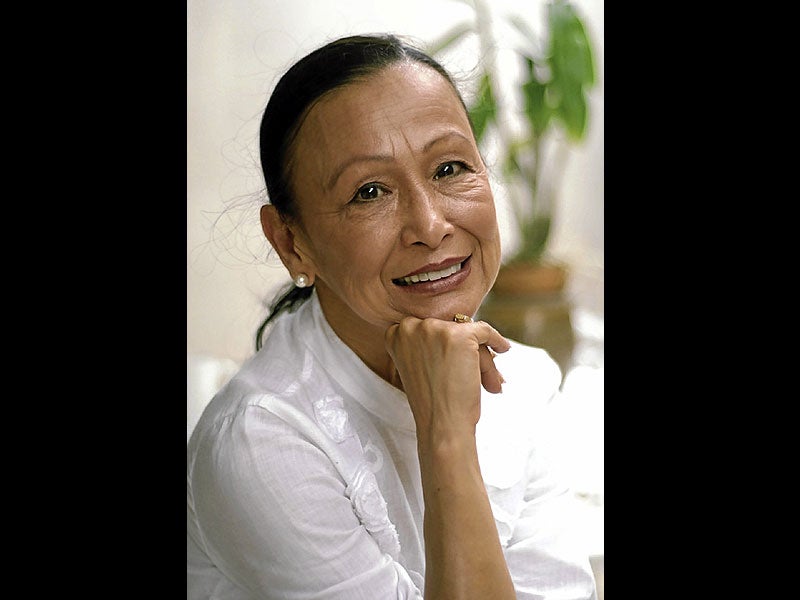 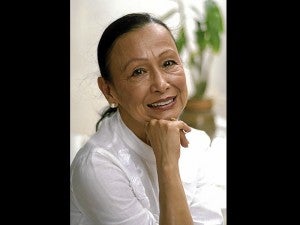 It is almost sunset, and we are on the steps of a partially burnt, almost abandoned edifice. She gets up, faces the structure, and breaks into a wide smile.

“It’s perfect! I can build upwards!” Maniya Barredo is envisioning the conservatory for the arts she has dreamt of for 30 years.

Since her retirement from dancing, she has had time to enjoy home life with her husband (“my cowboy”) of 24 years, basking in the great outdoors on their farm in the outskirts of Atlanta, Georgia.

She sounds like just another genteel retiree, but when the subject of dance comes along, her demeanor changes.

Maniya knows whereof she speaks, having achieved the pinnacle of being a ballet dancer: International Prima Ballerina, a title conferred on a chosen few, and in her case, bestowed on her by Dame MargotFonteyn in 1978, making her one of 24 prima ballerinas in the world. In Asia, she is one of only two, the other being Japan’s Yoko Morishita.

Getting there was not easy. Ballet, after all, is an exacting art that can take its toll on anyone. A ballerina must endure long hours of practice in unfriendly pointe shoes to transform herself into an enchanted swan, or a sleeping princess awakened to true love’s kiss.

As one of the youngest dancers in the Hariraya Dance Company and the newly formed Philippine Ballet Theater (PBT) in the ‘70s, Maniya, then known as Honey, followed a work ethic which remains unchanged.

One of PBT’s founders, ballerina Vella Damian, remembers Maniya as a tireless dancer who would repeat a step or a combination of steps until she got it right, with characteristic cheerfulness.

“She was always smiling,” Damian says. “And very neat! No matter how hard or long she would rehearse, there was never a hair out of place. And she could turn! She was a natural turner–parang trumpo! (like a top).”

Even when she was at the peak of her career, Maniya still craved to learn more from those she considered her ballet heroes. Dancing in the same show as the Cuban ballerina Alicia Alonso, for example, Maniya observed closely from the wings. At the end of the dance, Maniya rushed to Ms. Alonso to kiss the icon’s hand, in keeping with the ballet tradition of reverence.

The great ballerina, much to Maniya’s surprise, had seen her in the wings and remarked, “You were watching so close to the stage, you were almost on it.”

Former principal dancer and Ballet Philippines Artistic Director Cecile Sicangco Ibarrola was in the second cast for the performances of “Swan Lake” and “Giselle” when Maniya was guest artist of the company. Because Maniya had to return to the US after the opening night performance, she was not able to see Cecile dance in the second week’s run.

In a show of support, Maniya requested her mother to watch Cecile’s performance, and before the show, her mother handed Cecile an encouraging letter from Maniya. “Maniya cared,” Ibarrola says. “She left me with something when she once said, ‘Take care of your career and your career will take care of you.’ You could see the work, discipline, and dedication she put in her profession. And yet she would have fun.”

Augustus “Bam” Damian, also a former Artistic Director for Ballet Philippines, was barely 17 when he first partnered Maniya when her original partner got injured. Damian, who went on to be a highly applauded principal dancer for Maurice Bejart’s Ballet of the Twentieth Century, calls Maniya “the gold standard” for ballet. “She has raised the bar!”

Her mounting of “Romeo and Juliet” as the opener of Philippine Ballet Theater’s 25th season, which she herself danced as her retirement piece, is part of her transition from performer to mentor and trainor. Already, her advice is highly sought after by the young generation of dancers.

Just before Filipina ballerina, Candice Adea, competed at the Jackson International Competition last year, Maniya’s encouragement to her was to “dance with your heart, and leave it on stage.” Ms. Adea won the silver medal.

Shortly after she hung up her dancing shoes, Maniya became the Artistic Director of the Metropolitan Ballet Theater (MBT) in Atlanta, Georgia, “a pre-professional high intensity ballet school specifically for those who want to make a name in ballet. It promotes excellence based on the highest standards of integrity and professionalism.”

Maniya’s students imbibe the same brand of dedication, love, and professionalism she has accorded her art.

Auditions for various dance company schools like the San Francisco Ballet, New York City Ballet, The Joffrey Ballet, and American Ballet Theater are held at MBT. “It’s a nod,” says Maniya, referring to the high rating approval that her peers have given her brand of training.

Earlier in the afternoon of this interview, Maniya had conducted a company class for the Philippine Ballet Theater. Dressed in black dance pants and shoes, pale pink top and sweater, the diminutive ballet star would pause to straighten a leg here, curve an arm there. Later, as she left the class, she playfully reminded an erring dancer, “Do it right or I’ll bite your head off.”

Her discipline and hard work during her performing years did not leave her wanting for coveted dance roles. Dancing everything, from the classics to Balanchine, in a span of 57 years, she has done it all, and best of all, had fun with it. “Take work seriously,” she advises, “but not yourself.”

She bemoans the present day dilution of the classics, which she feels must be sustained and treasured. The language of the classical base, she fears is disappearing slowly. Undoubtedly, her purist’s heart seeks artistic excellence and technique. “I learned what excellence is,” she says.

The formation of her “good mind,” she attributes to her mother, who “brought me up right,” teaching her forgiveness, unconditional love, and that nothing was impossible.

“Fear is ignorance; I’m a no-excuse type of woman. No is not operative.” At MBT, she never accepts “I can’t” for an answer. “So my students say, ‘Ms. Maniya, I am trying to work this out’ or ‘I am challenged by this,’ and I say ‘Okay, let’s talk about it.’ I charge them 50 cents if they say ‘I can’t.’ A friend here (in Manila) joked that if I did that here, I’d be a rich woman.”

Yet, she declares, “I so believe in the talent here!” In a country known for an inclination to song and dance, it is the babies she wants to influence. “It’s all about empowering children, and how you teach is empowering. A teacher must be like a sculptor, making masterpieces-yet-to-be. You stand them up, then you color them.”

Before she left the country at age 18, Maniya remembers the worst piece of advice given to her here: “You’ll never make it.” Asked if she ever experienced racial discrimination, she says, “If you anticipate that, it will happen.”

A muffin for breakfast

There, too, were the unknown people she tenderly remembers, like the cook in a drugstore cafe in New York named Juan from whom she bought a muffin for breakfast every day. Juan, perhaps feeling sorry for the young Filipina dancer, would add some orange juice for the same price, then later, an egg. And one night, he made more soup than what was required so he could give her some. “He fed me every day for two years,” Maniya recalls, near tears.

“I have been blessed with gifts,” she says. “Talent goes only so far. Being the vessel, you must take care of it. My destiny is to continue what I have been given.”

For her directorial debut in the Philippines, she brings two young dancers she has mentored in the US. Dancing the leads are 21-year-old David Kiyak, now with the Orlando Ballet, and 17-year-old Naomi Hergott, who still studies with Maniya at the Metropolitan Ballet Theater in Atlanta.

It is their first time to travel out of the US, and the experience of dancing in their mentor’s home country has proven to be an exciting adventure.

After the performances, their hosts will take them to the beach. Like a doting stage mother, Maniya lightly kisses each of them and calls them her children. “Expect from them a performance of 150 percent. You will feel first love again”

The mentor in her is showing up loud and clear, and for someone who wants to be known as “someone who tried to be the best I could be,” the best is yet to come.