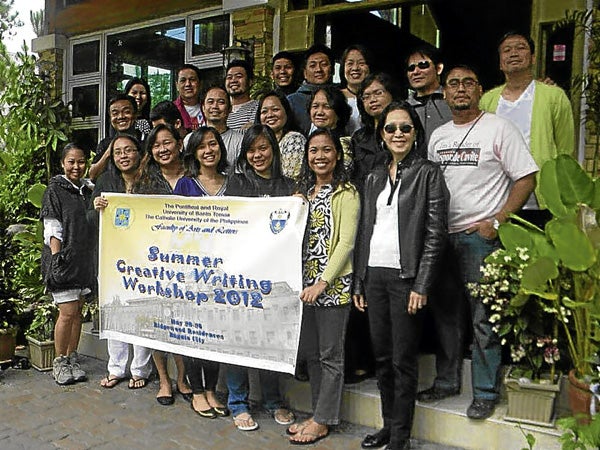 When I was an undergraduate literature student, we had only one Creative Writing class the entire four years of our stay at the University of Santo Tomas.

This was held during our fourth year and lasted only for a single semester. It was a semester my classmates and I looked forward to, and one we felt went by far too quickly.

To start us off our path as creative writers, our professor, poetess Nerissa Guevarra (ma’am Ricci, as we called her), told us to bring a box filled with our most precious possessions. From this box we were to select an item and build a story around it and the memory it carried.

This was a technique she taught us in order to help anchor not only our narratives but also our poetry. It proved invaluable when she brought us to Baguio for a three-day, writing-intensive workshop, the culmination of which was a performance in front of the Baguio literary community to showcase our pieces.

Three years later, I found myself going back to Baguio for another writing workshop, this time held by the UST Faculty of Arts and Letters. Spearheaded by much-awarded writer of fiction and nonfiction, Cristina Pantoja Hidalgo, who also heads the UST Publishing House, the summer workshop brought together hand-picked practicing and aspiring writers from the Thomasian community in the hopes of re-igniting the flame that the late poet-teacher Ophelia Dimalanta sparked with the establishment of the UST Center for Creative Writing and Literary Studies in September 1998.

The hotel we stayed in was beautiful. Made of glass and wood, it gave off an aura of lightness and tranquility. From the street level, the Ridgewood Residences rose three floors, with an additional three carved into the mountain itself, making it six floors in total. Surrounded by greenery, and oriented towards the view of small hills, it was nestled beautifully into a mountain side, and blended seamlessly with its surroundings. Its large glass windows let the light in and allowed the outdoors to become a part of our indoor life. It was a perfect place for contemplation, introspection and creation.

Starting on Monday all the way until Friday, each day of the workshop week began at eight in the morning and went on until late in the afternoon, sometimes lasting into the evening as the discussions of the pieces introduced more topics into the conversation. Each fellow was allotted two sessions for his/her work, each one lasting an hour or so, with one of the panelists assigned to moderate the discussion of his/her submitted work.

Creative nonfiction works about love became avenues to discuss the movements of stars and the galaxies. Poetry on a failed relationship became the springboard to discuss text messaging and the effects of technology. Fiction became a way to bridge the gap between two seemingly disparate fields such as sociology and literature. Memories were recalled. People were moved. Flash fiction, long narratives, epic poems, and the use of stark imagery and language were all touched upon. The flaws of each work were discussed as part of the revising process. Good-natured laughter and ribbing abounded. Each of the fellows brought something new to the table, something worthwhile, something exciting.

On the third day of the workshop, while standing on the balcony overlooking a beautiful garden, I saw two butterflies twirling around each other as they soared ever higher, their wings fluttering in a frantic dance. It seemed an impossibility, the altitude they reached with their seemingly flimsy wings. I was on the sixth floor of the hotel and I had to tilt my head back and look up to keep them in view. The butterflies I saw were small, plain and white, but they flew like they floated, with seeming effortlessness, and yet I know their wings have to beat 25 times a second in order to keep them afloat. The simple flight of a butterfly is in fact a marvel of biological engineering.

This reminds me of what had been discussed in the workshop—how the works that are the easiest to read are the ones that take the most time to complete, for fluidity of language and the seamlessness of the narrative takes time and countless revision to achieve. It takes effort to make a work read effortlessly.

The convenor, Hidalgo, talked about the creative writing center and about the woman, Dimalanta, to whose memory the workshop had been dedicated on the opening day. As Hidalgo was saying those words, a beautiful butterfly flew into the room and danced about the tables, its wings fluttering elegantly and catching the light.

The future of Thomasian literature seems bright. Not that it ever really lost its light. Not under the stalwart eye of professor Dimalanta. And now, with the UST Graduate School opening its doors once more to Creative Writing, with Creative Nonfiction and Poetry Classes on offer; and plans for putting in place an undergraduate Creative Writing program; the revival of the literary journal “Tomas,” also to be under Hidalgo’s care; and the UST summer writers’ workshop to become a national, competitive, and annual affair, it seems there are only good things to come for the Thomasian writing community.