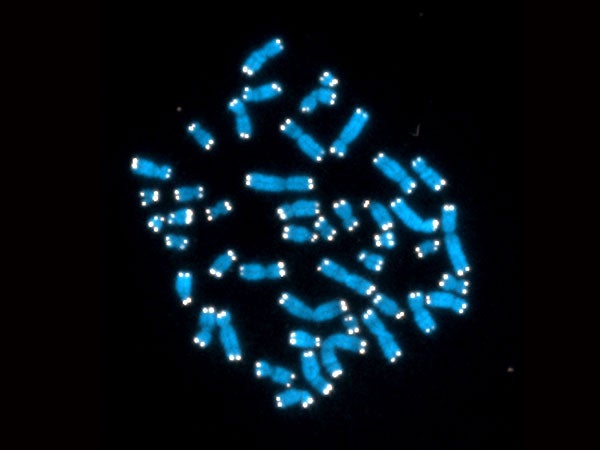 This undated image made available by the NIH's National Cancer Institute shows the 46 human chromosomes in blue, with telomeres appearing as white points on the ends. Some previous studies have associated having longer telomeres with better health and longer lives. AP

NEW YORK—Finally, some good news for older fathers. A new study hints that their children and even their grandchildren may get a health benefit because of their older age.

It’s based on research into something called telomeres — tips on the ends of chromosomes.

Some previous studies have associated having longer telomeres with better health and longer lives. Telomeres haven’t been proven to cause those benefits in the general population, but a number of researchers think they may hold secrets for things like longevity and cancer.

As you age, telomeres shorten. However, previous studies have shown that the older a man is when he becomes a father, the longer the telomeres his children tend to have. The new research confirms that and finds it’s extended to the grandchildren.

That’s a cheerier result for older dads than some other studies in recent years that indicate their kids are at heightened risk for things like autism, schizophrenia and bipolar disorder.

The new work didn’t look at health outcomes. That’s a future step, said researcher Dan T.A. Eisenberg of Northwestern University. He presents the results with colleagues in Monday’s issue of the Proceedings of the National Academy of Sciences.

Carol Greider of Johns Hopkins University, who shared a Nobel Prize in 2009 for telomere research but who didn’t participate in the new study, said it’s no surprise that the telomere effect would extend beyond children to grandchildren.

She cautioned that since older fathers also tend to pass more potentially harmful genetic mutations, it’s “not at all clear” whether advanced paternal age gives an overall health benefit to children. In a statement, the Northwestern researchers said their study shouldn’t be taken as a recommendation that men reproduce at older ages, because there’s a risk of mutations.

The researchers’ work involved an analysis of telomeres in blood samples from a large, multigenerational study in the Philippines.

One analysis of about 2,000 people confirmed the idea that the older your dad was when you were born, the longer your telomeres tend to be. That held true throughout the age range of the fathers, who were 15 to 43 at the time their sons or daughters were born.

Researchers then extended that another generation: The older your father’s father was when your father was born, the longer your telomeres tend to be. That analysis included 234 grandchildren. A separate analysis found no significant effect from the mother’s father.

The telomere contribution from a grandfather adds to the one from the father, researchers found.

Some previous studies of the impact of older fatherhood have been less encouraging. In 2010, for example, at least two big studies confirmed a link to having children with autism, with one finding that a father’s age makes the biggest difference when the mother is young. In 2008, a big Swedish study strengthened evidence linking bipolar disorder to older paternal ages, although researchers said the risk was still so low that it shouldn’t discourage older men from having children.