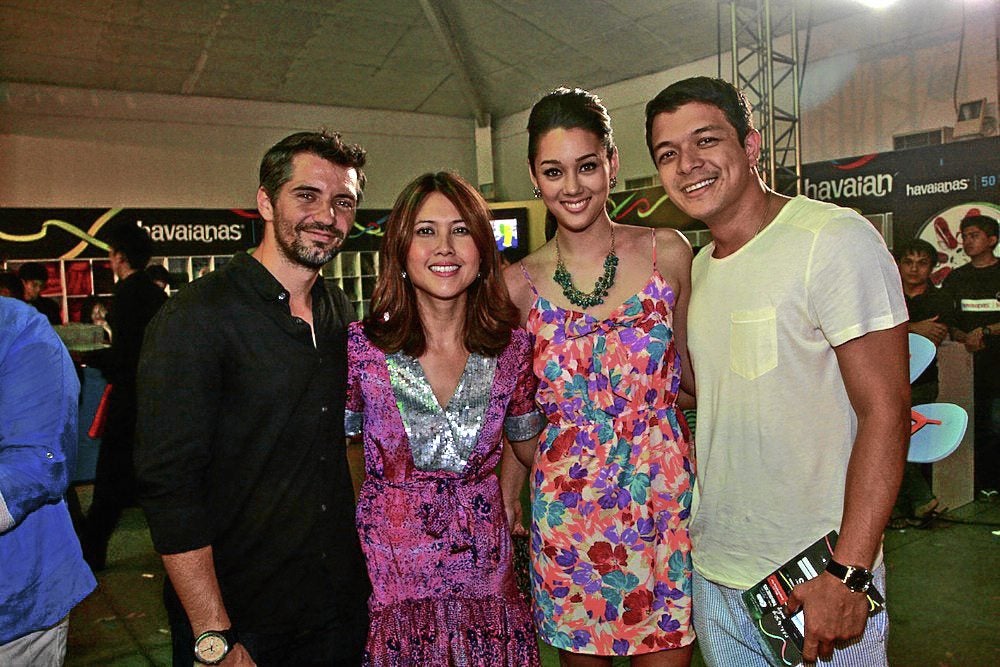 Only a few of top brands age gracefully, dahlings, which is why après 50 colorful years of flip-flop fashion, Havaianas, is still reigning.

The celebration of its golden anniversary was held at Rockwell Tent recently. Make Your Own Havaianas (MYOH) presented the remarkable saga of the brand in a historical exhibit showing people how Havaianas established itself as a beachwear icon, palanggas.

“MYOH 2012 evolved from a event where people can mix and match the colorful straps and soles of Havaianas, to a more festive gathering that honored everything that contributed to making the brand what it is now,” said Anne Gonzalez, managing director of Havaianas Philippines.

During the launch, we were told Havaianas started in Brazil and flourished in other countries, that it started through the union of the breezy culture of Hawaii and the serene design of Japan. The fusion of these two elements gave birth to the global brand.

All through its 50 years, Havaianas has mastered the summer look that never goes out of style.

Robinsons Place opened its first full-service mall in Pangasinan. Its mall in Calasiao, palanggas, is the 30th in Robinsons’ awesome mall chain, and at six hectares, one of its biggest in the North.

“History tells us that the second oldest town in the province was founded by the Dominicans in 1588,” she said. “It was the Spanish missionaries who instigated the construction of the Saints Peter and Paul Church, one of the largest churches in the country which is listed as a Natural Cultural Treasure.”

She added that the Calasiao church is home to the miraculous image St. Tesoro, making Calasiao a pilgrimage site for religious devotees.

At the opening of Robinsons latest baby, RLC president and COO Frederick Go said, “We are thankful for the unending support of the local government of Calasiao for making it possible for us to open our 30th mall in their town.”

Calasiao Mayor Mark Macanlalay said, “The Municipality of Calasiao is grateful that out of all the towns in Pangasinan, Robinsons chose ours. Robinsons is, indeed, a great part of the growth of Calasiao, especially in creating business and more job opportunities.”

Among those present in the launch was adorable Robina Gokongwei Pe.

For the new mall, Robinsons Movieworld operates three ultra-modern cinemas and a 3D cinema, which is the first in the region, with a total seating capacity of over 1,000.

Check out Robinsons Place Pangasinan, which also has the Quantum Amusement Center and a food court that sits up to 400 diners, palanggas.

If you’ve been traveling around the the United States, you probably have heard of, or better yet, dined at the renowned PF Chang’s, the China bistro making waves worldwide with over 200 branches.

The chain is now in Manila with no less than co-founder Philip Chiang jetting in for the grand opening, Also coming were PF Chang president for global brand development Michael Welborn and director for international marketing Genaro Perez.

Chiang thanked the full house for “joining the celebration.”

PF Chang’s has been popular in the US since it opened in Scottsdale, Arizona. Its simple but superb cuisine made with fresh natural ingredients has made it a popular dining spot for Hollywood celebrities no less, dahlings

Bringing PF Chang’s to our shores was the brilliant idea of Archie Rodriguez, president and CEO of Global Restaurant Concepts, Inc.

“The honor of having the first P.F. Chang’s in all of Asia to be located in the Philippines was an ultimately rewarding challenge.” said Archie, as he welcomed the namedroppables present, such as Ambassador Philip Lhuillier, with wife Edna Diago; Justice Andres Reyes Jr. and Muntinlupa City Mayor Aldrin San Pedro.

Guests couldn’t have enough of the house specialties such as Crab Wontons, Dynamite Shrimp, Mongolian Beef and Spicy Chicken.

The resto serves a variety of incredible drinks such as Lucky Cat Martini, Asian Pear Mojito and Organic Agave Margarita. So cool.