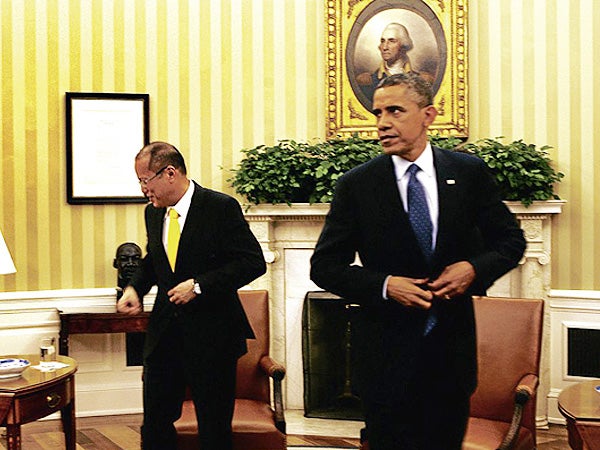 THE OVAL OFFICE REVISITED US President Obama hosts President Aquino in the storied Oval Office of the White House on June 8. Minutes after their 20-minute sit-down, they are photographed by Philippine Daily Inquirer lensman Edwin Bacasmas.

Jottings from my travel notebook

MANILA, Philippines—I covered President Benigno S. Aquino III’s three-day official working visit to the United States early this month. The visit, Mr. Aquino’s third trip to America since becoming president, was upon the invitation of US President Barack Obama. This was the second time I’ve been to the White House, although it was actually my fourth time on Capitol Hill.

Same old Oval Office has not changed a bit since the last time I covered President Gloria Arroyo. Same with the occupant. Like with GMA (Arroyo’s initials), President Obama was always flashing a smile whenever he talked with President Aquino and the media. As usual (?), the US Secret Service and White House media relations officers were very accommodating (!) We, the media entourage, had a chance to take pictures at the media briefing room, with the famous White House logo as backdrop. The office didn’t get any photos of this. It was a personal photo-op for me.

Before the one-on-one meeting, Mr. Aquino had lunch with US Secretary of State Hillary Clinton in her office at the nearby Department of State Building. But we were not invited to lunch. We were ushered out after the photo-ops. Just as well. We had to rush to the White House.

The US trip was Mr. Aquino’s 15th foreign travel since 2010. But I was only with the President for the third time.

Before flying back to Manila, Mr. Aquino held dialogues with our kababayans in Washington, D.C. and Los Angeles, where the most fun part happened: We met with Allan Pineda of Black Eyed Peas and American Idol runner-up, Jessica Sanchez. I told you, I’m not going (home) yet even if it’s more fun in the PH.