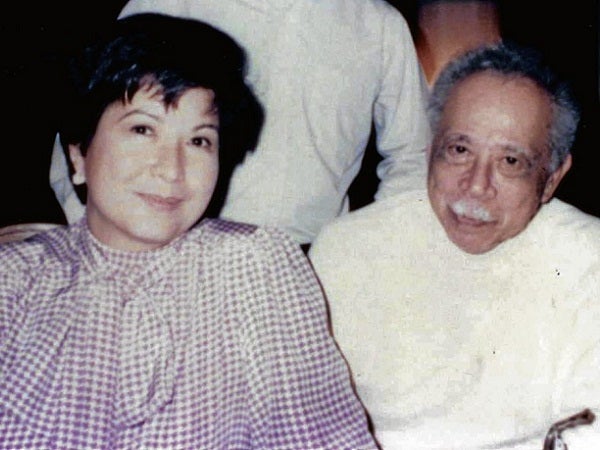 Gifts from my father: obstacles, success– and ‘pancit’

There are always unexpected gifts in life that do not first appear as gifts, and the first one was from my father during the end of my sophomore year in college.

He unexpectedly picked me up from school and said he was taking me to my favorite panciteria for an early dinner. Thrilled at the idea of having exclusive time with him and in my favorite restaurant, I fully expected a wonderful surprise, perhaps an overseas trip.

Instead, he broke the news, and in the most gentle way he could, that I would have to give up the rest of my college education. My oldest brother was going to a university in the US, and the cost of his education and living expenses, plus the cost of educating two other siblings in the Philippines, was just more than they could manage despite all their efforts.

In addition to aborting my college education, I was expected to work and contribute my earnings toward my brother’s expenses.

I was stunned. I never saw it coming.

After we saw my brother off to the States, life returned to what appeared to me as normal. My parents were, in fact, like the proverbial ducks in a pond, calm on the surface but paddling frantically underneath, trying to keep everything normal, until they finally could not.

My first reaction might be described as selfish, if presciently liberated. If it was my brother’s American education that was such a strain, why wasn’t he being asked to give it up? Why me? I was every bit as good a student and believed myself to be just as worthy.

One can either credit or blame my father for this early expression of female self-esteem. Relatives always felt that my father was overly protective of me, attributing this to the loss of my parents’ first child at age 2, a daughter, during the war. Subsequently, there were three other sons, and me.

I never could see this overprotection myself; when my brothers got skates for Christmas, so did I. When they got bikes, so did I. There was never any obvious difference in his behavior toward us.

Although I clearly felt that I had been dealt a blow, I could also sense my father’s pain at being the one to deliver it. I could tell that he felt diminished as a father-provider, and his words are as clear to me today as when he said it: “All my life I’ve tried to remove any obstacles from your path to a happy life, but we’ve reached an obstacle that I can’t remove, and maybe it’s time and good that you now navigate this obstacle yourself.”

He went on to say that even without a college degree, he expected me to be as successful as my brothers, and when I asked him (cynically) what he meant by successful, he ignored my disrespectful tone and said, “Doing what you love to do and doing it well.”

We could not finish our pancit and drove home in silence, each one feeling bad for the other. I never returned to that panciteria.

Determined that I was going to be successful, as my father defined it, I was going to find a way to do what I loved to do, which was travel. When I was 12, my father was sent to the US for a year’s overseas training, and we traveled, as was normal then, by ship.

The venerable President Wilson took us via Kobe, Yokohama, Hong Kong and Honolulu to San Francisco. I considered it the year I was really born, when I became self-aware. Never had I seen such beauty nor experienced such exhilaration.

From that time on, I thought always of how I could forever replicate that experience, never imagining that it could ever be work-related. But whenever anyone asked what I wanted to do with the rest of my life, the answer was always the same: travel.

Through a stroke of immigrations luck, I found myself back in the US in the early ’60s, and since there did not seem to be a viable way to turn what I loved most into any kind of career, I simply concentrated on traveling as much as I could. I worked for several airlines at a time when they were generous with passes, empty seats were always available, and the word “terrorist” still unimagined.

Every long weekend was extended to accommodate a trip somewhere, anywhere. Unused sick leave days added to vacation days for yet more trips. When combining all these days did not allow enough time for a longer sojourn, I simply saved my money, quit my job and traveled until the money ran out.

Finally, I saved enough for what I planned to be a six-month round-the-world trip, only to see my stash spent within three months, having made it from Japan and Southeast Asia,  through the Indian sub-continent, and finally to Athens where, sick and broke, I dragged myself home.

With this travel experience under my belt, I managed to find a job as a tour escort with a large travel company, taking groups of American tourists to various worldwide destinations. It was a physically difficult but absolutely wonderful job.

Eventually, I married a fellow tour escort and that pretty much clipped our wings. Determined to stay in the travel business, I decided to work for the same company in various operations positions until, at 33 years old, I was promoted to vice president-operations.

I had died and gone to heaven. A career had happened that couldn’t have been imagined years before—one that actually paid me to travel, without limitation of time or expense, to all the company’s destinations and to scout for new destinations.

The first phone call after the promotion was to my father, who responded with a calm ho-hum—well, yes, of course you got promoted, should I be surprised?

He suggested that we celebrate with dinner the following weekend, just the two of us. He picked me up and drove for what seemed like hours until we arrived at what was obviously a Filipino enclave, and pulled up in front of a seedy little joint with a large sign that said “Panciteria.”

He had found what must have been the only panciteria in all of Southern California. He reached behind and pulled out a cooler which had a chilled bottle of champagne and we giggled our way into the restaurant amid the stares of what looked like Pinoy stevedores.

We ordered the house special pancit from the Chinese-Filipino chef/owner (it was superb) and shared our champagne (in chipped water glasses) with the stevedores. He lifted his water glass to me and winked. After 15 years since our last panciteria meal, he had not forgotten, and all was forgiven.

An afterword: Many years later, upon the death of my mother, I learned that she, too, had to give up her high-school  education upon her father’s death, in order to run the business that supported the family and sent her three younger siblings to college.

It was a shock, as she was to me the smartest woman I knew, tutoring me on my math problems, able to convert a recipe for four heads to one for 12 all in her head, a quick and agile decision-maker, and a no-nonsense manager of her household. At another time, she could have been the president of IBM.

I regret that she did not share her experience with me (I believe, out of embarrassment) as it might have made a difference, although I’m not sure how. My aunts, who finally divulged this information after my mother’s death, think not.