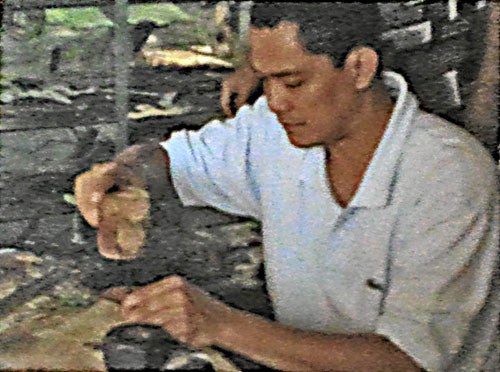 Blessed John Paul II was convinced that art is one effective medium by which Christianity and other non-Christian beliefs can have a dialogue within the area of the various cultures of the contemporary world. As he once expressed in one of the assemblies of the Pontifical Commission for the Church Cultural Heritage, “The wisdom of the human persons of art and culture searches constantly through their works the face of God and of the human being.”

This idea of the blessed Pontiff becomes a reality when on Aug. 16, the University of Santo Tomas Museum opens an exhibition of Baroto Murti Anindito’s art works, entitled: “Wayang Wahyu: Biblical Art in indonesian Puppetry.”

Baroto employs the Indonesian art of shadow puppetry called Wayang to narrate Biblical stories. Except for some standard Christian art features like the halo and the cross, the Biblical characters are made to conform to the designs, colors, appearance and techniques of the Wayang.

The Wayang, which in Javanese literally means shadow, is considered as one of the important cultural heritages of Indonesia and most probably one of the world’s extant oldest theater art forms. In 2003 UNESCO declared the Wayang a Masterpiece of Oral and Intangible Heritage of Humanity.

Baroto writes about the technique of making shadow puppets, “The puppets used in the performances have intricate hand carvings and paintings on dried buffalo hide which are, in themselves highly-priced art pieces.” The performance of the Wayang is accompanied by music, literature and expression of cultural and philosophical sensibilities of the people. Baroto believes that, “The ethical values of the Wayang encompass personal, cultural, moral, political and religious realms, capable of arousing solidarity and unity. As such, it has become a vital element of the identity of Indonesian people and was instrumental in the formation of a national character.”

Baroto Murti Anindito, who is also a student of the UST Graduate School, explains the uniqueness of his art works: “Of more than 100 varieties of the Wayang, the exhibition features 40, but focuses on the Wayang Wayuh, or Biblical Wayang. The unique and exceptional art form first became popular in Central Java in the ‘60s as a means to narrate the Gospel message through the performance of shadow puppetry. Bible stories are depicted through the shadow theater, accompanied by the music of traditional gamelan. Wayang Wahyu uses Javanese language, music and other supporting platforms to complete an artistic religious expression. It is an evolved form of the Wayang but uses the pattern of its traditional versions.”

This multimedia exhibition features some of the original shadow puppets done by Baroto, photographs and an audio-visual presentation that shows how the intricate puppets are made and how they are actually handled during an actual Wayang performance.

In hope, this exhibition may echo what art, especially Christian, brings to a particular culture, as Blessed John Paul II said, “Especially Christian art, which means already a cultural good, continues to render its singular service of communicating with extraordinary efficacy, through the beauty of sensible forms, the story of the covenant between God and man, and the richness of the revealed message.”