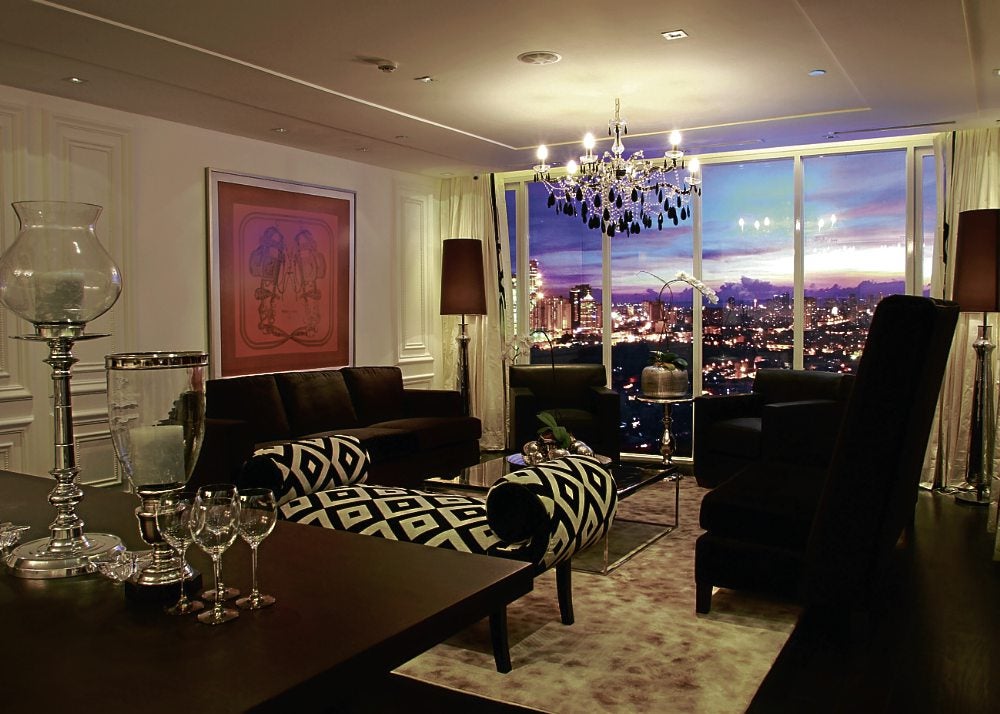 The sons of tycoon Donald Trump weren’t exaggerating when they declared that the residential skyscraper, Trump Tower Manila, was destined to be one of the most important buildings in Asia.

Designed by Broadway Malyan, it recently won the Best Residential High-Rise Architecture in the Philippines category at the Asia Pacific Property Awards 2012-13 held in Kuala Lumpur. It was adjudged according to its unique characteristics, site, appearance and finish, safety, security, sustainability and innovation, and marketing.

“For the Trumps, to create a building is really to change the skyline,” said Robbie R. Antonio, Century Properties managing director and Trump Tower Manila project head. “Their buildings are monumental. Everything is in superlatives. The façade has a curtain wall and it will have a lifestyle center.”

Standing at 250 meters on Century City along Kalayaan Ave., Makati, it is touted to be one of the tallest buildings in the country.

Since its launch last September, the sales have been phenomenal—67 percent of the 220 units have been sold.

Donald Trump Jr., vice president for development and acquisitions, of The Trump Organization, explained, “The Trump residential property is always at the top of the market providing luxury in its foremost sense, from the location, service and architecture to the lifestyle experience. With every Trump-branded building, in every market we enter into, we strive to set the standard in luxury and service. Additionally, the design aesthetic incorporates elements that are indigenous to that particular location.”

About design, Trump Jr. said, Century Properties as the developer had wanted something that represented a progressive Philippines.

“The building was designed to evoke a very modern and sleek aesthetic, symbolic of Manila’s evolving landscape,” he said. “It is a thriving city undergoing a transformation into one of the world’s most promising development platforms.

“The design goal of Trump Tower Manila was to create a building that was both visually arresting and truly extraordinary while still taking into consideration the context of its immediate environment.” Punctuated by spires, the façade has a glass curtain wall with light shelves and shading systems that respond to the sun in different times of the year.

With Trump, space is considered a luxury. Hence, a suite (not to be called studio) is 57 square meters. There are duplexes of 230 sq m and a penthouse of 435 meters, which is bigger than a house.

A one-bedroom unit is generously proportioned at 80 to 100 sq m. The bigger units have generous walk-in closets and dressing rooms. The floor-to-ceiling height is three meters, much like Art Deco ancestral homes in the Philippines. Hence, the prices range from P9 million to P130 million.

In a meeting with the Trumps, Jose Antonio, Century Properties chair, suggested to have New York-themed units which suggest the Big Apple’s best-known districts. The buyer acquires the unit with surface treatments inspired by the interior themes.

The finishes of the hip Downtown/SoHo consist of ebony flooring, white walls with linear paneling and white natural stones in smooth matte finish.

Fifth Avenue’s classic aesthetic is reflected in light wood veneer floors and walls, marble and granite natural stones in creams and browns. The elegance of Park Avenue is translated in traditional moldings on walls and cornices, wenge wood flooring, lacquered high-gloss finish for doors, and marble and granite natural stones in cream, white and black. They are provided with top German kitchen systems.

“People ask ‘What do these mean?’  When the Trumps enter the market, they’ve got to offer something with lots of superlatives,” said Antonio.

“This will be 56 floors but we gave up 16 stories so that buyers can indulge in the Trump experience,” said Antonio.

“When I meet the Trumps, they are very detailed on how their clientele live,” he explained. “Take the five-fixture bathroom which is their requirement. I said not all Filipinos use a bathtub. Most developers would provide a shower, toilet and one sink in the bathroom. Trump Tower has five-fixture bathrooms—toilet, bathtub  and shower and two basins. That’s luxury. But they insisted that we should provide it because of the aspiration. We should deliver more than what you would expect.”

“They’re savvy to understand that markets are different but they also wanted to have a common standard,” added Antonio. “No deviations. The floor-to-ceiling height of three meters was nonnegotiable. The lobby must be almost triple height if you wanted to make a statement and create a grand sense of arrival.”

Antonio said the 55-sq-m suites could be a one- or two-bedroom unit by local standards, “but the Trumps wanted New York standards. The way one would live should be reflected in the size and layout.”

His relationship with the Trumps started when Antonio was building the I.M. Pei-designed residential condominium, Centurion, in New York. Through a common friend, he met Ivanka Trump, daughter of business magnate Donald Trump.  Subsequently, he met her brothers, Donald Jr. and Eric, who hold the same position in The Trump Organization.

“We talked about families, expansion plans, the Philippines,” Antonio said. “They’re bullish about Asia. The three siblings are involved in managing their respective projects, but they’re also looking at new deals, project management.”

The Philippines’ selling point was its vital economy. “The value proposition of constant growth despite recession was to their liking,” said Antonio. “The Philippines is 100 million strong. It’s hard to ignore that population. New York is their playground but they’ve expanded to Chicago, Las Vegas, Florida and across the US. They ventured to Istanbul, Seoul and Panama. You can see a pipeline of developing markets.”

Asked what made them accept the project, Trump Jr. replied, “We encounter hundreds of deals each day and in our close study of Manila, we felt that the city would be a strong market for the Trump brand as the Philippines’ growth is remarkable. Manila is one of Asia’s growing cities and we recognize that its sophisticated society has a true appreciation of luxury.”

Antonio said he admires the Trumps’ business savvy and he can work with them. “The siblings are uncanny and astute. They were trained by the best. It’s hard to find people with Mr Trump as a mentor.”

On the similarities between the Trumps and the Antonios aside from the strong patriarch, Trump Jr. said, “We share common values, including excellence, superior quality and the upholding of the best standards for every real estate project. They have proven to be very hands-on in their management style, innovative and driven to redefine Manila as a city with no bounds.”