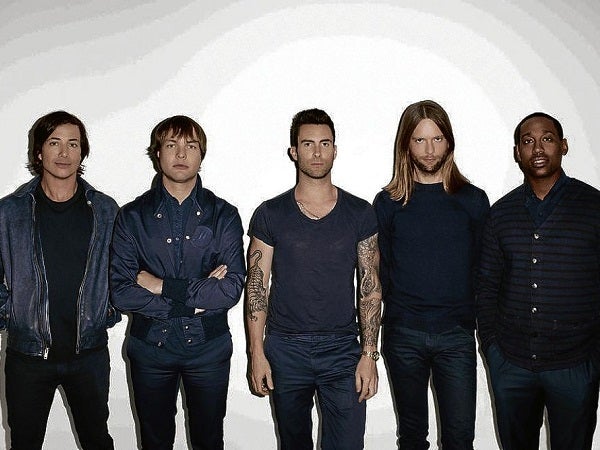 They say that the third time’s the charm. For Pinoy Maroon 5 fans, especially those who weren’t able to catch them in 2008 and 2011, this couldn’t be more true. This September, first-timers and “repeat offenders” alike will get the chance to watch Adam Levine kickstart the hot and heavy “-ber” months with his sexy Jagger swagger. Ladies, hang on to your ovaries… if you can.

Manila marks Maroon 5’s second stop in the Asia-Pacific leg of their tour for their upcoming fourth studio album, entitled “Overexposed.” The record is slated for worldwide release on June 26; meanwhile, tickets for the show will be made available for purchase on June 25 via TicketNet.

Short of associating it with more of their signature body-baring antics and steamy innuendoes, the title of Maroon 5’s latest album is actually an inside joke about their current status. The LA-based band has reached that stage where its popularity has become increasingly hard to deny, what with Levine’s venture into TV as a mentor for the hit reality show “The Voice” and as a new recurring character in season 2 of “American Horror Story.” Not to mention talks of his big-screen Hollywood debut in the upcoming romantic drama “Can A Song Save Your Life?” with Keira Knightley, Mark Ruffalo and Hailee Steinfeld.

“It’s like, ‘We get it—we’re overexposed,’” Levine says with a laugh. “We’re just trying to preemptively go where the conversation is headed anyway. We figured we’d get there first.”

The band has obviously done some tweaking in its sound over the years, resulting in material that’s different from the quintessential “Songs About Jane” or the sophomore record “It Won’t Be Soon Before Long” (which was anything but sophomoric). Nevertheless, there’s still one common thread that ties it all together. From “Hands All Over” to “Overexposed,” it seems like the quirky quintet will never run out of raunchy tunes (and album titles) to keep their fans entertained.

The success of the ridiculously catchy dance ditty “Moves Like Jagger” prompted the band to explore the idea of cowriting. The underlying message of their new album title captures the band’s willingness to take risks, sharing penning duties with today’s hottest pop bigwigs who were behind the hits of Ke$ha, Usher, Katy Perry, and One Direction.

“I feel like we’ve been standing on the edge of a cliff for a long time,” Levine says. “We’re a band that’s always been close to being full-on pop, but that’s rooted in a lot of other things: rock, soul, funk, the list goes on. ‘Overexposed’ is the first time we’ve ever completely embraced the idea of making pop music—of making songs for the radio. We just said, ‘Let’s not be afraid to do what we basically are.’”

Maroon 5’s fourth record is the result of that. Levine says that of all the band’s albums, “Overexposed” feels “both most and least like Maroon 5. There [are] lots of traces of the past, but it also hints at a new idea,” the singer explains. “More than anything, I think this record says that it’s always cool to try—that you should always be willing to take a step beyond whatever feels comfortable.”

The album features collaborations with well-known producers such as Max Martin (the album’s executive producer), Benny Blanco and OneRepublic frontman Ryan Tedder, with rapper Wiz Khalifa making a cameo in the debut single “Payphone.” Indeed, they are heading over to the “pop” direction with heads held high.

“I love how ‘Payphone’ seems like such a sweet song until the chorus comes in,” Levine says, referring to the part of the song where he shoots down the idea of love with a few choice expletives. “It’s totally subverting the song in this way that makes you lean in and listen.” The newly released reggae-inspired track “One More Night” marks the band’s second single, with a music video set for release in a few days.

The creation of their new album also brought about changes individually for the band members. “There’s a new focus that’s set into us both personally and as a band,” Valentine adds. “We had such amazing experiences the first 10 years of this group, and I think we spent a lot of time enjoying it, which was great. But now it’s like, ‘Well, what do we do? We make records,’” the guitarist laughs. “Put it this way: In 2007 after the show we were definitely finding out where the party was. Now it’s more like, ‘Hey, let’s go finish that song.’ That’s what’s more exciting to us.”

Will we see these changes translated onto the stage? Maybe. But if it involves Levine performing “Moves Like Jagger” in all his shirtless glory, well… now that’s exciting.

“Maroon 5 live in Manila 2012“ is presented by Midas Promotions in cooperation with Dayly Entertainment.