The sad end of a hero | Lifestyle.INQ ❮ ❯ 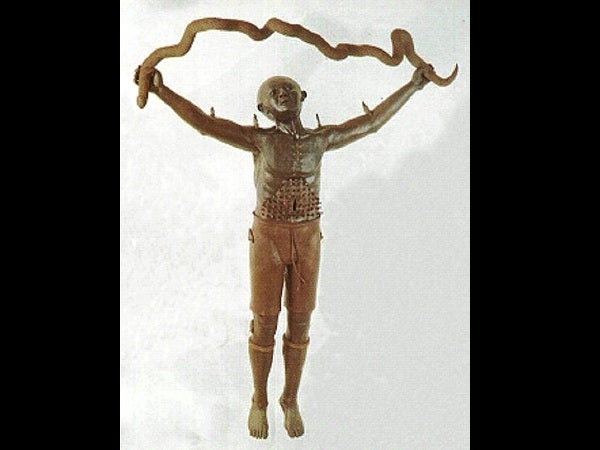 The sad end of a hero

When someone told Dr. Joven Cuanang that I had held my own wake, he said, tongue-in-cheek, as usual, “Tell her if she decides to ascend, I will supply the crane and the choir. I’m serious.”

Well, doc, there’s a probable ascension here—only it’s not mine. You’re an art lover so you may want to witness the rescue of a beautiful sculpture (in cast resin) of the Bagobo divinity, Lumabat. He has outstretched arms, like a crucified Christ, but he is actually a pagan god. He holds aloft what looks like a serpent, but its sculptor, Bob Feleo, says “it represents the horizon.”

Lumabat was one of the culture heroes who went to heaven without having to die. How? The Bagobos believe there’s a secret entrance to heaven and it’s through the horizon which is believed to have giant jaws that chomp up and down. If you’re quick, like Lumabat was, you could crawl through the aperture without becoming minced meat. Lumabat got through all right and that’s how he became a god.

The sculpture hung by its arms from a huge flowering tree in our garden. When a big typhoon came, one of his wrists slid from its moorings and Lumabat crashed right on the hard piedra china walk. The fall shattered his jaw and one foot. Lumabat had been like a member of our family for a long time. We were devastated. We even gave him a proper burial.

Like all our art pieces, Lumabat’s delivery from Bob Feleo’s furnace had been welcomed with a created ritual. I think it was chanting, which old people and young people joined. There was incense burning all over the garden. We wore bits and pieces of Bagobo costumes from my baul. He was installed with all the pomp and circumstance of a chief on the biggest branch of that tree. The witnesses shared bread afterwards.

Most of the artworks in the house had been given a rite of passage. The mural of Elmer Borlongan that was to go in my room, was escorted with much reverence from the truck to its site. On its inauguration, the door to my room was completely sealed with Manila paper on which all the guests had signed their names with crayolas. Like a ribbon-cutting, the paper was to be cut open only when everyone was ready to come in. Coke Bolipata played his violin, standing on a stone bench in the garden. It was a musical evening.

Other new paintings we had danced to in welcome. Another time we had an interaction sketching session. The gift of a quarter moon mirror (from Ernest Santiago) was celebrated by covering it with several pieces of ethnic cloth and different guests unveiled it. When our artist-designed bathroom was inaugurated, Lourd de Veyra sat on the toilet bowl playing a Radioactive Sago Project composition on his guitar. I like every art milestone in our lives to become indelible.

My neighbor, my son’s wife, Lilli-Ann, seems to be on the same wave length as I. She collects artworks but grander than mine. She has always said that acquiring art is like an addiction. That was why Lumabat’s remains had to be exhumed. Lilli-Ann missed him. She had heard the sculpture crash in the middle of the big typhoon and never forgot it.

We had buried Lumabat properly, with the family around the grave in the middle of the garden. (Even my husband, who had been startled by the floating presence on the tree every time he emerged from his room, missed him). Lumabat was buried, arms outstretched (resin cannot fold). His grave was therefore shaped like a cross. Maybe a century after my death, I used to think, when another owner of this property excavates the burial spot to dig foundations for some new structure, they will be shocked to find this mysterious undecaying artifact with rigid open arms. It used to make me chuckle. But it was not to be. Barely five years later, which is now, Lumabat was already being exhumed. Lilli-Ann wanted him restored and reinstalled in another part of the garden.

And so out emerged the fallen god, all muddied, and to my great dismay, more damaged than ever I remembered him. Not only his jaw, it turned out, but his whole face, with the exception of the beautiful eyes, was hopelessly cracked. The arms were still stiffly outstretched, still had the tiny wings, but the hands were detached, as was the remaining foot with toes intact. The serpent-shaped horizon was broken in two. The torso was cruelly separated from its lower limbs. No plastic surgeon or caster could ever put Humpty Dumpty together again.

I invited its sculptor, Bob Feleo, for a final verdict on the pitiful remains. We had washed the parts as Lumabat’s ancestors would have cleaned his bones in the mythical age. Bob shook his head sadly and suggested a reburial.

“But wait!” Lilli-Ann says, “Save the torso! Bury the lower part only.” (Halved like despised aswang!?) “I will plant flowering vines on the upper part and they will creep out of the eyes and the mouth and be very beautiful!”

So, doc Cuanang, there will be no ascension. Save your crane and your choir. Lumabat will just have to have an extended life as a trial flower pot!