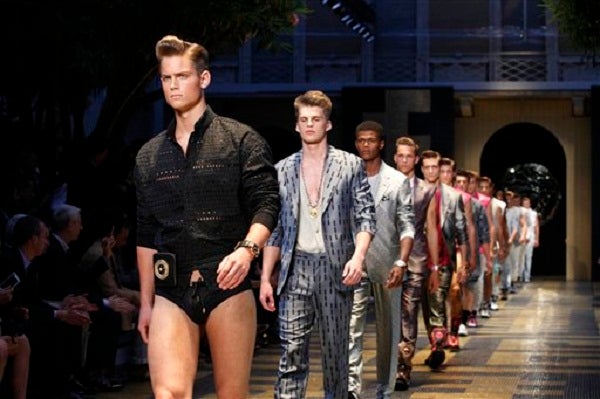 MILAN — The first day of the Milan menswear shows for next summer was a mixed bag of old favorites and new entries.

The biggest news Saturday was the return of Jil Sander to her eponymous label after an eight year absence. She marked her comeback with a prim and precise collection dotted with color and trendy styles, showing she is willing to update her minimalist trademark.

The Sander event was nearly overshadowed by the unconventionally bright Burberry collection aimed at dispelling any British summer gloom.

Dolce&Gabbana, using non-professional models imported from Sicily and harking back to yesteryear styles, showed that summer dressing can and should stay genuine and simple. Luxury comes in the details.

Still to come in the four-day preview showings are such big Italian designer names as Versace, Prada, Missoni, Armani and Fendi.

Jil Sander is definitely back.

The menswear collection shown in Milan on Saturday — the first collection German-born Sander has designed for her own label in eight years — had the undeniable minimalist touch which characterizes the eponymous label founded in 1968.

The collection was prim, proper and precise. Pristine white shirts paired with an elongated jacket and slim trousers, both in dark Jil blue, graphic printed T-shirts in fabric just stiff enough to keep them from looking sloppy and classic two-tone lace-up shoes made up the summer look.

“It’s good to be at home again,” the designer told The Associated Press backstage after the much applauded show — the first of the four-day preview Milan menswear shows for summer 2013.

In the label’s stormy history — Sander left her company twice in the past 12 years — other designers tried their hand at her style, but no matter how creative, they were never quite able to match her very personal minimalism.

The last of these was Belgian designer Raf Simons, who bowed out after his rave review women’s collection last February, just as Sander was announcing her return. In April Simons was named creative director at Dior.

“We want to keep our integrity and go back to our roots,” said the 68-year old designer, dressed in a crisp white shirt and navy slacks. Off the runway rumors had her unhappy with the flashier turn the label had taken.

And yet her interim years, some spent designing for the low cost but trendy Japanese Uniglo chain, seem to have relaxed her tastes.

The latest sleeveless jacket is really an elongated vest. Bermuda shorts in ultra-light wool are cut with precision but shaped like surfing trunks. Classic footwear sports a trendy colored sole.

The once black and navy palette has been invaded for next summer by bright shades of ochre yellow, granite red and cobalt blue and particularly warm beige. No matter what the style, the fabrics are, as usual, exquisite.

These are happy boys. Happy that it’s summer. Happy to be Sicilian.

A live band in traditional costume, complete with mandolins and tambourines, accompanied the 73 men and boys who walked down the runway of the Dolce&Gabbana venue in downtown Milan, wearing yesteryear combinations of black and white, a reference by the designing duo to their Sicilian roots.

Often opulent if not ostentatious in their fashion preferences, this round the duo opted for simplicity, starting with the models. Ranging from 12 to 43 years of age, all non-professionals, they come from Sicily from such walks of life as student, house painter, barber, waiter or simply unemployed.

“We wanted to put our clothes on real men because fashion should be for real people,” Stefano Gabbana said, speaking to reporters ahead of the show.

Maybe that is why despite the yesteryear setting, the models looked so at home in their striped black-and-white T-shirts over slim black slacks or plain black shorts accessorized by a black Sicilian cap.

For more formal wear, the Sicilian man puts on his Sunday best: a pristine white shirt with wide open collar and a close fitting suit with small jacket and slim trouser. Boys, as was the custom until not very long ago, stick to shorts.

Most of the outfits were accompanied by sturdy leather sandals.

A closer look at the clothes, however, reveals that this is not low-cost fashion. Fabrics are ultra-light and ultra-fancy from linen to silk, to light wool and chiffon.

The grand finale, made up of all 73 models, looked like a simple parade of dark suits and white jackets. In reality each outfit is unique, either in choice of fabric or styling detail.

But the latest menswear collection by British designer Christopher Bailey, shown Saturday in Milan, was much more about shine than it was about England’s proverbial bad weather.

Everything in the summer 2013 preview collection, from short-sleeved shirts to traditional rain attire, was in shining, almost blindingly bright shades of metallic, or better yet, fluorescent fabric.

But fear not. Bailey wouldn’t dream of leaving his tried and true customer out in the cold.

Along with the shimmering shockers, the show was filled with traditional tweeds, classic suits albeit with a slim cut and country old favorites: raincoats, field jackets and oversized parkas.