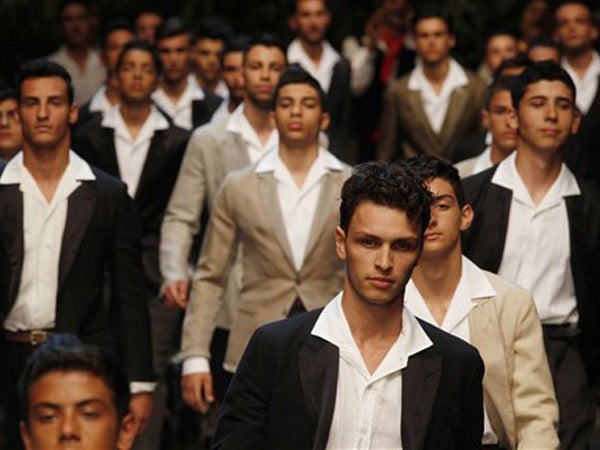 MILAN — These are happy boys. Happy that it’s summer. Happy to be Sicilian.

A live band in traditional costume, complete with mandolins and tambourines, accompanied the 73 men and boys who walked down the runway of the Dolce&Gabbana venue in downtown Milan, wearing yesteryear combinations of black and white, a reference by the designing duo to their Sicilian roots.

The invitation to the Summer 2013 menswear show Saturday had a black and white picture of the Sicilian coast on the cover. Inside was a quote from G. Tomasi di Lampedusa, Sicilian author of “The Leopard”: “Their vanity is stronger than their misery,” he said of his fellow islanders.

Often opulent if not ostentatious in their fashion preferences, this round the duo opted for simplicity, starting with the models. Ranging from 12 to 43 years of age, all non-professional, they come from such walks of life as student, house painter, barber, waiter or plain unemployed, and were the result of three months of casting in Sicily.

“We wanted to put our clothes on real men because fashion should be for real people,” Stefano Gabbana said, speaking to reporters ahead of the show.

Maybe that is why despite the yesteryear setting, the models looked so at home in their striped black-and-white T-shirts over slim black slacks or plain black shorts accessorized by a black Sicilian cap.

For more formal wear, the Sicilian man puts on his Sunday best: a pristine white shirt with wide open collar and a close fitting suit with small jacket and slim trouser. Boys, as was the custom until not very long ago, stick to shorts.

Most of the outfits were accompanied by sturdy leather sandals.

A closer look at the clothes, however, reveals that this is not low-cost fashion.

Fabrics are ultra-light and ultra-fancy from linen to silk, to light wool and chiffon.

The silk shirts, when not white, have a subtle puppet print, while the finely woven sweaters reveal Greek temples and painted wagons.

The grand finale, made up of all 73 models, looked like a simple parade of dark suits and white jackets. In reality each outfit is unique, either in choice of fabric or styling detail