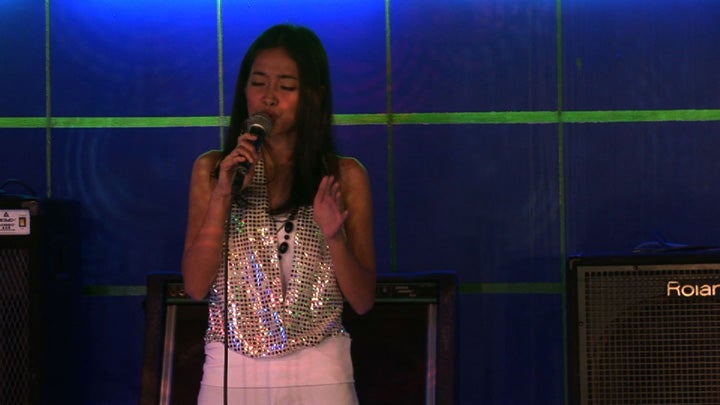 Philippines’ musicians sing their way out of poverty

Manila, Philippines – On a mock-up stage in a Philippine music studio, single-mom Joanna Talibong is singing for her life.

The former church-choir girl is nervous and struggling to stay in key as she battles through more than a dozen takes of the syrupy Olivia Newton-John ballad “Suddenly”.

If she and keyboard-playing friend Jason Panggoy can get their video-demo right, they stand a chance of securing a series of gigs in South Korea that would enable them to start a long journey out of crushing poverty.

“I did not finish college, so I don’t have many job options… overseas I can earn a lot more,” the carpenter’s daughter tells AFP during a break from singing at the studio in a rundown quarter of Manila, the country’s capital.

Roughly nine million Filipinos, or 10 percent of the population, work overseas because there are so few job opportunities in their largely impoverished homeland.

While many toil as largely anonymous maids, sailors, construction workers and labourers in foreign countries, tens of thousands also stand under spotlights entertaining crowds as singers and musicians.

Talibong is desperate to join them, or she will be forced back to a bar in a small northern Philippine city where for the past three months she and Panggoy have played to tobacco traders and travelling salesmen for $3.50 a night.

Adding to her problems is her nine-month-old son, who has a clubbed foot and lives with his grandparents while Talibong pursues her musical career.

Her manager has lined up a six-month booking for Talibong and Panggoy at bars in South Korea that would pay them each $800 a month, and she knows exactly where her first pay cheques would be be spent.

“My priority is an operation for my son’s clubbed foot. That’s really my goal. That’s what’s pushing me to work really hard,” says Talibong, who is just 21 years old.

But first the duo’s demo tape – which also includes a Taylor Swift and Matchbox 20 numbers – must pass muster with the artist review board in Seoul, a review process that takes about a month.

Their manager, Wilma Ipil, who has been sending an average of two bands to South Korea every month since 2008, concedes the duo may not get the gig, amid growing competition from other Filipino talents trying to make it overseas.

“Previously, even inexperienced musicians got hired,” says Ipil, who sang in Hong Kong, Thailand and China herself before going into band management.

“But now, with the wealth of talent available, promoters have become more discriminating.”

Nevertheless, the demand for Filipino performers overseas is enormous, according to Jackson Gan, the head of the music studio where Talibong is recording her demo.

“Our only competition is ourselves. The whole world knows that if you have a low budget but need quality, you get Filipino talent,” says Gan, who also acts as an agent for other export acts.

Gan estimates between 25,000 and 30,000 Filipino musicians and singers play in 3,000 clubs, hotels, cruise ships and restaurants around the world at any one time. The pay generally ranges from $800-1,500 a month, according to Gan.

Gan attributes the success of Filipino performers overseas to the deep roles music and dance they have in local culture.

Singing contests are often the highlights of village fairs and beauty contests, while song and dance are a staple of the most popular national television game shows.

Karaoke is one of the country’s most loved forms of entertainment, with guests at weddings and birthday parties expected to be able to belt out songs behind a microphone to entertain their hosts.

Karaoke is also a mainstay at bars, restaurants and shopping centers.

“Some of my singers were discovered at karaoke joints,” says Gan, a 20-year veteran of the business, whose scouting regimen sees him serving as judge at singing contests in remote villages across the country.

Gan says Philippine musicians are also well-known for their warm audience rapport, a reflection of a general easygoing nature for which Filipinos are famous.

“That is a very important part of the music. It’s not just plain singing,” he says.

However, Gan says most performers have a short shelf-life overseas, particularly the female lead singers who often have to end their foreign sojourns when they have babies or for other family reasons.

And although many can copy perfectly the world’s most popular songs, few cover band members will ever get a recording contract.

But there are some inspirational success stories for those who continue to dream of making it big.

The most famous is Arnel Pineda, who for many years fronted Filipino bands in Manila bars and in Hong Kong.

His big break came in 2007 when members of US rock group Journey were looking for a new lead singer and saw clips of him singing the band’s songs on YouTube.

Pineda was hired soon after an audition in the United States, and his first album fronting the band debuted in the top 10 of the American Billboard Charts. Pineda and Journey continue to perform at sold-out concerts around the world.