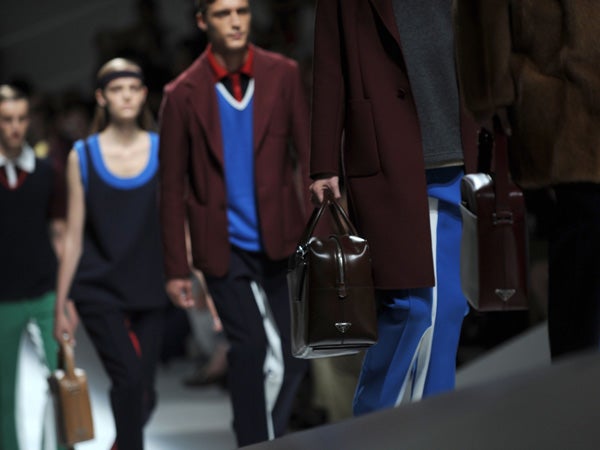 MILAN – Maybe it’s the staging, or the music — this round sexy French — or the clever themes. But somehow Miuccia Prada always puts together a great show.

The designer’s latest collection presented Sunday evening, the second day of preview showings for summer 2013 menswear, was happy, snappy and just minimalist enough to insure the label’s reputation as the most avant-garde maison of Italian fashion.

Prada created an entire collection and a brand new look, starting with the white-band theme of sportswear items.

First she put the white bands on the inside instead of outside of a trouser leg, then she accentuated the same white band for the neckline of the accompanying T-shirt top.

Like musical variations on a theme, the imaginative designer worked the bands into different components of her summer wardrobe from shirts to jackets to overcoats.

As the show progressed, the bands changed color and became ever larger, culminating in a two-tone effect for a simple polo shirt or the lapel of a jacket.

Meanwhile, the white band also showed up under the arm of a lightweight raincoat or became the cross strap of a flat leather sandal.

Not satisfied to limit the new inventions to the male population, Prada put together a his-and-her version of most of the outfits.

For the girls, however, the T-shirts came in luxurious dyed fur. All the female models wore a tennis band around their head to accentuate the sporty feel of the collection.

The new Prada bag is unisex. Big and boxy, it can be carried by hand and double as an overnighter.

From the white stands set up in the trendy Prada theater, Miuccia’s many fans cheered her on.