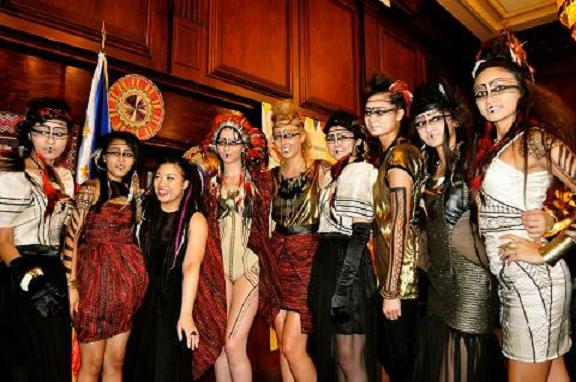 Anna Puruganan (third from left) with her designs and models. Photo by Elton Lugay

Cordillera warrior art on the runway

NEW YORK CITY—Feathered headgear, eye tattoo and lines that define. Young designer Anna Puruganan showcased these details and more in a collection inspired by the indigenous art and traditions of the Cordillera tribes.

The fashion show held on June 21 at the Philippine Center on Fifth Avenue presented a collection of style she described as “a lost art.”

“I want us to remember that this was the original Filipino style before we became a colony. This was our culture, the kind of art that has been lost now and I don’t want to forget that,” Anna told The FilAm.

Born in Brazil and raised in Canada, Anna studied fashion design at La Salle’s Benilde College in Manila. Story is that she met this indigenous band, Kadangyan, who told her about their story. The band’s music “Kaluluwa” played in the background, a perfect rhythm for Anna’s themed parade of clothing using fabrics made of pina, silk, hablon and abaca.

“Long time ago, the Cordillera tribe was considered warriors and headhunters,” explained Anna, the daughter of a diplomat. Her mother, Merl, heads the Dual Citizenship department of the Philippine consulate.

The tattoos used on the models were very significant to the tribe, she said. “The tattoo was a symbol of their preparation going to the war,” she said. “I really thought it was beautiful.”

She explained further her use of the red-gold-and-white color scheme. The white pina and silk is a tribute to the Cordillera women dressing partly naked. The touches of red symbolize the “blood that was shed and how many heads were taken.” The metallic accents depict women preparing for battle.

“For a really young designer who is starting in the business, she already knows what she wants and who she is,” said fellow designer Izza Dungca. “She’s glamrock and edgy. It’s a very modern take and I love her idea of Filipiniana not being the conservative and the costume-y that we see or that we’re used to seeing.”

One of the models, Irene Abaya-Campos, said Anna’s collection brings out the “modern side of tribal.”

The show’s director, Erno Hormillosa, said Anna’s style is modern and very edgy and “creates a good metamorphosis of our culture.”