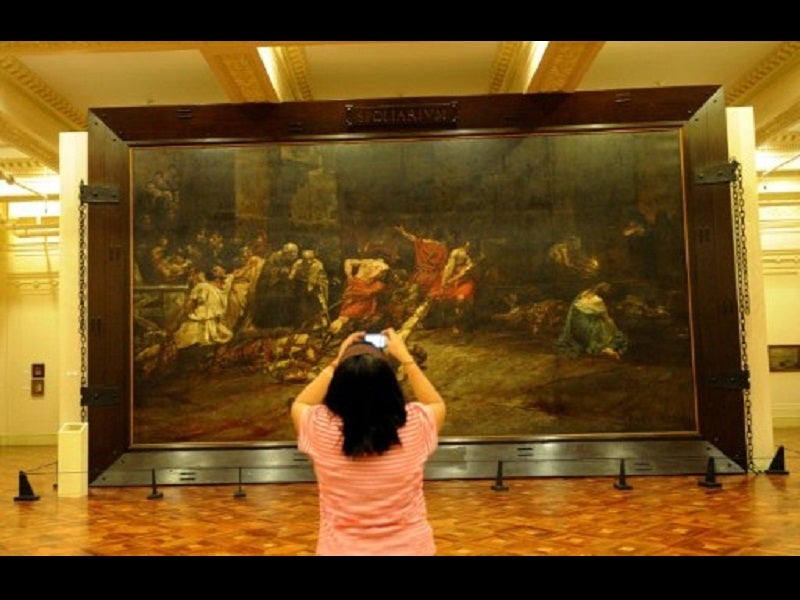 In this photo taken June 9, 2011, a tourist takes a photograph of the restored painting of Juan Luna 1884 oil-on-canvas "Spoliarium", at the National Museum in Manila. Flash camera-toting tourists could wreck the Philippines' greatest work of art, say the worried curator of the "Spoliarium", a symbol of Filipino awakening against Spain's colonial yoke. The huge 1884 oil-on-canvas by Juan Luna, depicting dead gladiators about to be stripped of their belongings, is top draw at the National Museum that is struggling with meagre funds to safeguard the country's cultural heritage. AFP

MANILA, Philippines—Thieves and art dealers are the usual suspects, but mildew and flashbulbs are just as dangerous for some of the Philippines’ beleaguered cultural treasures.

From a 30,000-year-old skull fragment of one of its first human inhabitants to imposing churches built during Spanish colonial rule, the Southeast Asian archipelago has a stunning display of artifacts showcasing its diverse history.

But they are under threat on every front.

Even at the National Museum where half a million archaeological items are supposed to be protected, a lack of funds means they could be as vulnerable as treasures outside its walls, said its chief conservator Orlando Abinion.

“They are in danger, yes, they are prone to deterioration, robbery, vandalism,” Abinion told AFP inside the rundown hallways of one of the museum’s twin 85-year-old neoclassical buildings in the historic old quarter of Manila.

Abinion has devoted the past 10 years to preserving and restoring the museum collections, which include 100,000-plus ethnographs, 1,500 pieces of art and hundreds of thousands of preserved plant and animal species.

He said he was severely limited by an annual conservation budget of less than P1 million (less than $23,000), but there had been some inspiring victories.

One of his biggest achievements was saving the “Spoliarium”, a four-by-seven-meter (301-square-foot) oil-on-poplar painted in 1884 by revered Filipino artist Juan Luna that had been badly damaged by heat and humidity.

Depicting dead gladiators set to be stripped of their worldly possessions, the masterpiece symbolizes the crystallization of Filipino yearning for independence from the Spanish that, in 1897, would escalate into an uprising.

Similar issues hound the National Library, which moved to its present building near the museum at the other end of the Manila park in 1961 with the remnants of a collection decimated during World War II.

Operating on a budget so small that air-conditioning has to be shut down on the weekends, the collection is under threat from fungus, said German conservationist Monika Schneider-Gast.

“It will cost a lot of money to change conditions because they have to re-wire the library and have to change the air-conditioning,” the consultant told AFP as she worked on two frayed and mouldy late 19th-century books.

Written by national hero Jose Rizal, the books — “Noli Me Tangere” (Touch Me Not) and “El Filibusterismo” (Reign of Greed) — were trenchant criticisms of the Spanish colonial government.

The Spanish executed Rizal, then 35, by firing squad in 1896 for writing the books, sparking an armed revolution.

Anne Rosette Crelencia, the library’s rare books and manuscripts section chief, said it had taken a special meeting with the budget minister to get the government to fork out a little money for the Rizal project that was mainly funded by Germany.

Crelencia said she understood that the library may not be the top priority for the Philippines’ economic managers as they battle chronic poverty that sees a quarter of the population living on a dollar a day or less.

“Although we need the funds, the country is facing many problems too,” she said.

Nevertheless, she said the library urgently needed more funds to complete the archiving of its most precious collection, 400,000 pages recording the Philippine revolution against the Spanish.

The documents give an intimate window into the revolt — from the major decisions down to the meal allowances of specific guerrilla units — that ultimately failed when Spain ceded the colony to the United States in 1898.

Crelencia said sections of the collection were stolen many years ago — allegedly by scholars given special access to the papers at the library for their research — and sold to private collectors by unscrupulous dealers.

Outside of the supposedly protected zones of the library and museum, it is almost impossible for authorities to save many cultural treasures from thieves.

The museum’s Abinion listed 55 archaeological sites, including Roman Catholic churches and undersea wrecks, that were under threat.

“Bounty hunters at times beat us to the wrecks,” he said.

They include the San Diego, a Spanish galleon sunk by the Dutch in a 1600 battle and discovered in deep waters near Manila in 1991.

Abinion said it was looted as the museum waited for government approval for its preservation.

Some sites, such as about 200 man-made burial caves in the town of Kabayan with human remains mummified before the colonial era, have been declared by the United Nations as World Heritage Sites.

But neither the sanctity of the dead nor the threat of eternal damnation has foiled robbers, who carried off several Kabayan mummies in 2001-2002, as well as religious icons on public display on Catholic churches, Abinion said.

However Abinion said the law was not yet in force because the government still had not drawn up and approved its implementing rules and regulations.

In the meantime, the law it was supposed to replace remains in effect, prescribing a maximum fine of just P500 ($11.63) and no prison time.