When Miss Universe reaches the End of the World | Lifestyle.INQ ❮ ❯ 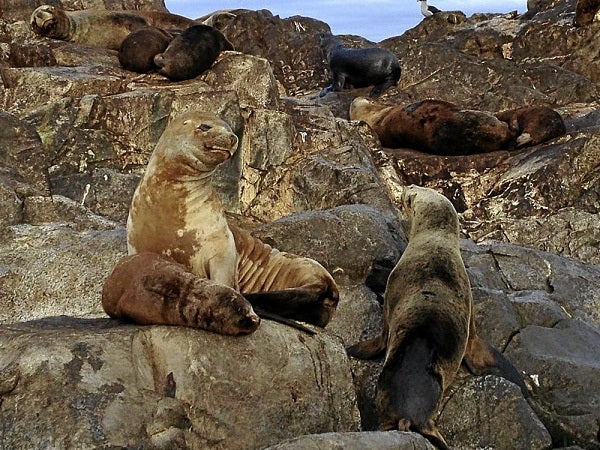 When Miss Universe reaches the End of the World

Given my never-ending passion to commune with nature, get away and view life from a larger perspective, I packed my winter clothes at the end of South American fall, and with my two daughters, Monica and Gabrielle, headed to Patagonia Chile and Argentina.

We traveled the reverse route taken by Ferdinand Magellan before he landed in Cebu and discovered the Philippines.

I wanted to go to the Fin del Mundo (End of the World) to be able to declare I have been there! The fascination to reach this historic point has always captivated me.

We began our journey where Magellan discovered Tierra del Fuego in Punta Arenas, Chile, and the southernmost city in the world, Ushuaia, Argentina, to Charles Darwin’s Patagonia region.

We took a bus from Punta Arenas to Puerto Natales where we stayed the night fronting the Ultima Esperanza (Spanish for “Last Hope”).

The name was derived from a sailor who was seeking the Strait of Magellan in 1557 between the waters of the Pacific and the mainland. It was the British expedition, however, of Robert Fitzroy three centuries later that found its fjords.

The Chilean fjords are long waterways that penetrate deeply into the mountains surrounded by the wilderness. (But it is the glaciers that beautify its already spectacular scenery.)

We reached the national park from Puerto Natales after three hours passing through lakes, rivers and imposing mountains. We ended our trip at the foot of Glacier Grey, one of three in the park that is in the Southern Patagonian Ice Field, which covered all of Southern Chile during the last glacial period.

Our lodge in Lago Grey faced the imposing Cuernos del Paine, a massif sculpted from thousands of years of glacial erosion. As this was the end of the tourist season, we seemed to have the vastness of this extra-ordinary virginal setting to ourselves. “Lord of the Rings” should have been filmed here!

We scaled Mirador Ferrier, a 700-meter climb that took us five hours! We trekked through red and gold foliage suggesting end of fall, and as we ascended the snowcapped rock outcrop, the great massif faced us.

We saw rivers, lakes, and Glacier Grey from its summit. An Andean Condor on a solo flight into the air was the only other form of life.

It was so serene, with only the sound of the wind rustling the leaves, that on moments I was tired, I could almost hear my heart beat.

Crossing the border to the province of Sta. Cruz on the Argentina side we drove an endless route to the capital of the glaciers, traversing huge estancias where gauchos herded their sheep as we marveled at the spectacular expanse of the Southern Andean Steppe.

Perito Moreno Glacier is the major tourist destination as it is large and is accessible by land. It continually grows until it reaches the opposite shore over Lago Argentino, forming a natural dam. Its pressure produced by the height of the damned water causes it to rapture naturally anytime from a frequency of once a year to less than a decade.

The less accessible Upsala Glacier has an ice field cover of 870 square km. Its giant icebergs floating on Lago Argentino is an indication of its rapid retreat which some say is possibly caused by global warming.

Buenos Aires is a city whose people, who refer to themselves as porteños, (people of the port), are as passionate about sports as they are amorous in their dance—tango.

Argentine tango is about music of sweet sadness and love. A dance of passion focusing on the leader’s chest, where the follower takes pleasure in surrender, in trust and in the feeling of romance until the tanda reaches its end.

In Argentine tango, the dancers are in tight embrace, their chests close to each other.  In a milonga (a place where tango is danced), most milongueros go single. There is an etiquette that is traditionally followed.  A gentleman asks a woman to dance using the cabeceo. It’s the act of getting a woman’s attention by looking at her.

If the woman makes eye contact, the man nods towards the dance floor. If she looks away, it means she refuses the offer.

On my first milonga mission, I dared not make eye contact until I was confident of my steps because the gentleman would not lead you back to your seat until you finished one tanda (four dances).

We are told to eat the way porteños do. And so we did. We went to the best parillada or asado.

La Cabrera in Palermo Viejo is the best. I am confused, however, since in both dishes, the meat is barbecued.

A typical asado can also signify celebration at home.  With it comes another Argentine etiquette which we experienced at Estancia El Ombu.

A good asado begins with salami and cheese, it is said. Then comes the choripan  (chorizo and bread).  This will give more time for the asador (the one who grills) to prepare the next meals.

Once the hunger is a bit relieved, he serves fried empanadas.  The starters begin after that.

He sends out the blood sausages, pork chorizos and sweetbreads with grilled vegetables and salads.  Malbec from Patagonia or Mendoza is served continuously during the entire asado.

Back then, I had to request that my meat be very red as Argentines typically want theirs well done.  The meats are eaten with their special chimichurri or salsa criolla.

Certainly, after that heavy meal, there was no room for dessert.

Tourism in Argentina has cashed in on the beautiful and controversial Evita Peron who was immortalized by Madonna in a film. She was certainly on my itinerary.

The saga of how she rose from obscurity to become Argentina’s most powerful woman enthralls me.  As a young First Lady, she was responsible for obtaining the legislation giving women the right to vote. The political history of Argentina cannot be told without reference to the legacy of Eva Duarte de Peron.

I loved Argentina, for its food and wine, its music and tango and its charming people, who enjoy the sweet life.  After all, they are Spanish-speaking Italians.

Marlene Dietrich once described them, “Latins are tenderly enthusiastic. In Brazil they throw flowers at you. In Argentina they throw themselves.”

The author, Miss Universe 1973, is also a devoted student of the Argentine tango.