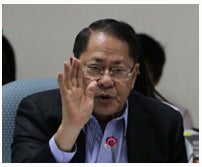 MANILA, Philippines—One hundred-fourteen years ago, Spanish military doctor Rogelio Vigil de Quiñones and 32 other soldiers held fort at Baler Church in Aurora, making the last stand for their flag as the Americans came and took over the Philippines.

More than a century later, the medical officer’s grandson, Jose Bidon, the Philippines’ honorary consul to Seville, has become a yearly visitor to his former stronghold, returning not as a conqueror but as a friend commemorating renewed ties between Spain and the Philippines.

The ties are poised to grow stronger as Spain opened yet another avenue of exchange with the Philippines, inducting a Filipino into its prestigious Real Academia Hispano Americana de Ciencias, Artes Y Letras (Raha) or the Hispano-American Royal Academy of Science, Arts and Letters.

The century-old Royal Academy in Cadiz, one of Europe’s oldest cities and the Iberian Peninsula’s center of culture and the arts, last month inducted Sen. Edgardo Angara into its elite roster of intellectuals, recognizing the lawmaker for furthering Philippine-Spanish relations within and outside the government.

Senator Edgardo Angara is the only Asian and non-Spanish speaker in the ranks of the exclusive academy.

“I think this is the highest honor I’ve received so far,” said the 77-year-old Angara.

The academy had established branches in Spanish-speaking countries, including one in Manila in the 1920s, which brought together intellectuals like Sen. Claro M. Recto, historian Teodoro M. Kalaw and lawyer Fernando Maria Guerrero.

Founded in 1910, the Royal Academy is an official corporation under Spain’s Ministry of Foreign Affairs, with King Juan Carlos I as its Honorary President. Currently, it has 45 corresponding academic members, expected to meet annually for academic and cultural exchange.

“The core group is in Spain, but in each country where the academy has a member, you can write to them, talk to them, exchange e-mails with them. So it’s already a global network of scholars of various fields—the arts, sciences, literature. And if you have access to that, that’s the whole universe. So it’s good for the country,” Angara told the Inquirer after flying back from Spain.

Angara, a Baler native who has written extensively about his hometown’s history during the Spanish occupation of the Philippines, flew to Spain with his wife, Gloria, to receive the lifetime honor as Asia’s only corresponding academic member to the Royal Academy on June 20.

His induction into the academy coincided with the 200th anniversary of the Cadiz Constitution, a liberal constitution known to have served as a model for other charters in Latin America and the Philippines’ own Malolos Constitution, which established the First Philippine Republic in 1899.

The ceremony also came just 10 days before the celebration of Philippine-Spanish Friendship Day yesterday, a commemoration that started in 2002 through a law penned by Angara.

Every year, roughly a hundred visitors from Spain, among them diplomats like Bidon, descend on Baler to celebrate ties between the two nations.

The same crowd also turned up for the Cadiz rites to honor Angara, when the senator received a medal and certificate signifying his membership into the Spanish academy.

Some 200 guests, among them academics, Spanish and Philippine officials, welcomed the senator into the elite group of 45 intellectuals from across Europe, Latin America and the United States.

The ladies came dressed for the occasion in their intricately made El Manton de Manila (the Manila silk shawl), a garment imported to Spain from the Philippines in the 16th century.

“I had no idea at all what kind of ceremony it was going to be. But there was an official nominator. Their reception for me was very formal.  Almost everyone who was approaching me would say, ‘Oh, my grandpa worked in Manila,’” Angara recalled.

In introducing Angara to the Academy, Alicia Castellanos Escudier, treasurer and member of the Royal Academy’s Board of Governors, cited Angara’s advocacy to strengthen ties between the Philippines and Spain.

“In spite of the fact that he does not speak Spanish (though he would like to), Mr. Edgardo Angara feels a great interest in everything related to Spanish-American history,” said Escudier in her remarks during the induction rites.

“Tonight, after so many years, we are going to continue our relations with the Philippines. We hope that the huge physical distance between our countries, the main cause of forgetfulness and lack of understanding, does not go on being an obstacle of the reunion and exchange of knowledge, values and ideas,” Escudier said.

Angara related that, until just a few years back, Philippine-Spanish relations had been close to zero: The Spanish language ceased from being an official language in the Philippines in 1973 and in 1987, it was removed from the school curriculum.

“We virtually had no bilateral relations. It was going down to zero. So my work is getting our relations back to normal with Spain. It’s already paying off,”  the senator said.

“They resumed the official aid program to the Philippines just this decade. Spanish companies are doing business here again. The exchange of artists, scholars is ongoing. So the normalization of relations has resumed,” Angara said.

He shared this optimism with the Cadiz audience, saying the Royal Academy’s recognition of a Filipino showed that Fil-Spanish ties was “emerging from the dark age of our relations.”

“There is so much we can do together, and our best tool for achieving these goals is education,” said Angara, his remarks read in Spanish by Philippine Ambassador to Spain Carlos Salinas.

“May the Raha support academic and people-to-people exchanges that will facilitate research into our common identity.  May education enlighten us, as it did then; and may education propel us toward greater and kinder understanding of our shared past,” he said.

Angara has sent a group of Filipino scholars to Mexico to pore over archives on the galleon trade, including rare documents detailing cargo of ships that sailed between Manila and Acapulco.