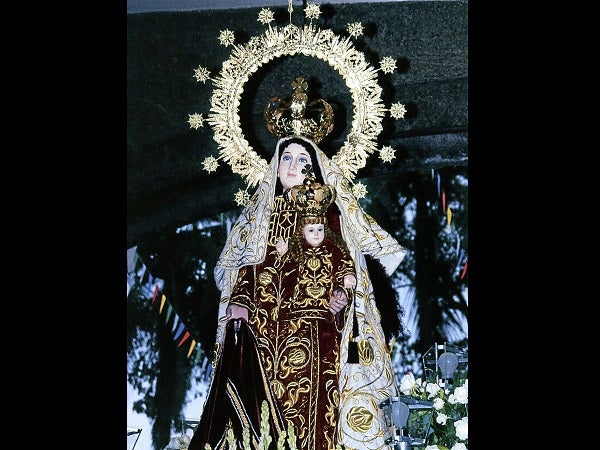 Feast of Our Lady of Mount Carmel slated July 16

The feast of Our Lady of Mount Carmel on July 16 is a very important feast of the Catholic Church.

The feast commemorates the giving of the brown scapular by the Blessed Virgin Mary to St. Simon Stock.  The wearing of the scapular assures one of salvation.

A procession in honor of Our Lady of Mt. Carmel will follow after the Fiesta Mass.

According to the most ancient Carmelite chronicles, the Order  of Mount Carmel has its origins with the disciples of the prophets Elias and Eliseus. They lived in caves on Mount Carmel. They honored the Queen of Heaven as the Virgin who was expected to give birth to the Savior.

When the reality replaced the symbol, the pious ascetics of Carmel were converted to the Christian Faith. In the 12th century, many pilgrims from Europe who had followed the Crusaders came to join the solitaries. A rule was established and the Order began to spread to Europe.

Amid the many persecutions raised against the Order of Mount Carmel, newly arrived in Europe, Saint Simon Stock, General of the Order, turned with filial confidence to the Blessed Mother of God. As he knelt in prayer on July 16, 1251, in the  Convent of the White Friars  in  Cambridge, she appeared before him and presented him with the well-known brown scapular, a loose sleeveless garment destined for the Order of Carmel, reaching from the shoulders to the knees. It was given as an assurance, for all who died wearing it, of her heavenly protection from eternal death. An extraordinary promise, indeed, but one requiring a life of prayer and sacrifice.

Devotion to the blessed habit spread quickly throughout the Christian world. Pope after pope enriched it with indulgences, and innumerable miracles put their seal upon its efficacy. The first of them was worked at Winchester on a man dying in despair, who when the scapular was laid upon him by Saint Simon Stock at once asked for the Sacraments.

Our Blessed Mother must have been mighty pleased that wonderful day of April 18 when the women and youngsters  of   Barangays Magasang and Tandang  in Cantilan, Surigao de Sur gathered, offered  flowers and celebrated Mass in her honor.

The happy event was the highlight of the Golden Jubilee celebration of the Legion of May led by Curia president Sis. Virginia Cosmiano and supported by Marian devotee Liles Pimentel, wife of  Gov. Johnny Pimentel.

The Holy Mass was preceded by the blessing of the Holy Rosary Mountain and a giant-size icon of Mother Mary. Similarly found in the Mother Mary Center are  the Ina Poon Bato Grotto and a giant painting of the Divine Mercy.

Our Lady of the Roses

Grace Salvacion prayed the 2,000 Hail Mary’s  alone last June 18  in her house to mark the anniversary of the apparition of the Blessed Virgin in the ’70s  to Veronica Leuken in Bayside, New York.

Our Lady manifested herself in the shower of red roses.    Grace told me that when her daughter takes photos of the image in her  altar, the expression on her face changes.   As in all apparitions of the Blessed Virgin Mary, she asked for the practice of penance and forgiveness.  She asked for the praying of her Holy Rosary to bring peace.

Grace is part of Our Lady of Medjugorje Prayer Group that includes Letty Zapanta, who will hold the praying of the “2000 Hail Mary’s” on July 7, First Saturday,  at  the Chapel of Mt. Carmel in Camella Homes, Bacoor, Cavite.

What probably holds us as a people are our penchant for celebrating anniversaries that bring members of families together. Such was the golden wedding anniversary of Demetria Abarca—Quilao and Clemente Quilao held at at the Saint Vincent de Paul Church at San Marcelino Street, Ermita, Manila,

Relatives from as far as Tolosa, Leyte came.  Fr. Manuel Ocaña, parish priest of Most Holy trinity Parish in Alang-Alang, Leyte celebrated the Mass, together with Msgr. Bernardo Pantin, vicar general of the Archdiocese of Palo.  Fr. Ocaña is a nephew of tia Metring; she being the first cousin of his father, Claro Garcia Ocaña.

Claro is the son of Felix Ocaña, the brother of Rosa Ocaña who is the mother of Demetria.  Fr. Ocaña who is fondly called “Fr. Emboy” remembers when he and his sister, Dr. Ofelia  Ocaña Alcantara, were still studying, they stayed  with their tia Metring and tio Mente.

Devotees of Our Lady of Piat are urged to attend the Mass in her honor on July 7, 9 a.m., at the Sto.  Domingo Church.