The nurturers, the virgins and the monsters | Inquirer Lifestyle ❮ ❯ 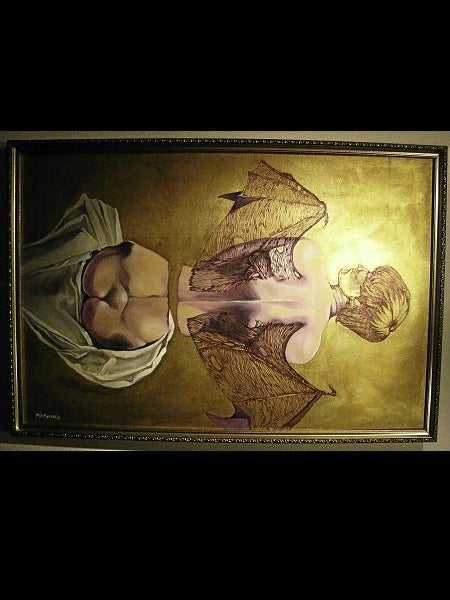 The nurturers, the virgins and the monsters

A sexy manananggal who must’ve done workouts in a local gym in the daytime when she’s in human form, goddesses captured in their youth before they became immortals, monsters so cute they’re good enough to cuddle and present as a gift to a young child—these inventive images by Tin Garcia, Julie Shen, Gabrielle Lopez and Katrina Pallon are showing at Secret Fresh Gallery in Greenhills, San Juan City.

When one meets the four, who are garbed in gothic-inspired casuals, with one (Garcia) sporting “Alice in Wonderland” tattoos on her fair arms, including Lewis Carroll’s line from the same book, “‘I’ll be judge, I’ll be jury,’ said the cunning old fury,” somehow one expects them to do works that are dark and disturbing, along the lines of vampires and werewolves.

When one learns that some of them belong to rock bands that carry names such as Bad Days for Mary, Scarlet Tears and Narcotic Venus, these expectations are reinforced.

Ironically, these four women avoid eating meat (three are omnivores, one is pesco-vegetarian) and think one of the advantages of being single is hanging out in cafés and chatting. Garcia, the oldest in the group at 36, speaks for the others—“We’re kinda boring. We’re not party people, we’re not night persons. We just like to meet for dinner and coffee afterward.”

These “boring” artists have filled up the ample wall space of the year-old gallery with interpretations of women as nurturers, virgins and monsters.

In their statement, they wrote that “the exhibit is more than a static exploration of roles, however. Myths are meant to be passed down from storyteller to storyteller, causing archetypes to mutate with each telling. The artists assume their positions in the chain of myth-making, and create fresh narratives for these nurturers, virgins and monsters. The results are at once unsettling, empowering, beautiful and deeply affecting.”

Shen, 25, a communications graduate of La Salle and former graphic designer for a Filipino website that offers deals, is a self-taught painter. Admitting she’s not as experienced as the others, she chose watercolor and pencils to do portraits of goddesses of war from different cultures. Only this time, they are portrayed as young girls.

She imagines them this way, saying, “If they were among us, it would be interesting to bring them down from their regal pedestals and look at them as girls. I often see women as being either three (nurturer, virgin or monster). Maybe that is why such archetypes exist since the beginning of language and tales. It seems to make us women appear as unstoppable. Damage a woman, and she becomes a monster. Most powerful of all is the nurturer. Without her, we are nothing.”

She doesn’t strive for cute in how she dressed up as a winged creature on what’s called a “munny” or blank canvas doll. She says, “In storytelling, it’s about subtext, layers and twists that make the characters more interesting. Monsters come in different faces and forms. Perhaps they are not the monsters; sometimes the spectators are. There is no proper good and evil in my book.”

Garcia says her group picked the exhibit title from an article on the web: http://www.helium.com/items/961095

Classical-Lit-Mythology. She did research on Philippine mythology and found female roles that “resonated quite loudly with my personal interpretation of the creatures I painted. I am inclined to believe that ours is largely a matricentric society rather than a matriarchal one, and the roles of nurturer, virgin and monster are preexisting. I do not think I am in any way trying to redefine these perceptions as much as I try to shed new light, by way of composition, illustration and paint.”

Like the works of the other three, Garcia’s mixed-media paintings all glow with an otherworldly luminescence. Even her frames are almost baroque in their gilded colors. She has always considered frames as part of the work, and patronizes a Christian frame shop that does those elaborate frames.

In explaining why her “Munnynanggal,” a collaboration with her boyfriend Iñigo de Paula, is almost as cute as a Hello Kitty item or a character out of the kiddie show “Sesame Street,” she quotes John Devera’s line: “Mythology is all about our fears and our hopes.”

She says, “The creature-monsters I painted may as well be about our fears and hopes and humor and glamour. I chose to portray these monsters the same way fashion magazines would want to portray their models. I wanted to take the monsters out of their commonly perceived context by adding humor (a tikbalang in the throes of transforming into a leggy humanoid) and glamour (a curvy manananggal recalling the birth of Venus as she splits in half).”

Lopez, 27, a Fine Arts graduate of the University of the Philippines Diliman and graphic artist for the website www.freelancer.com, says the exhibit did not alter her perception of women. She says, “It hasn’t really changed, but I thought it was an interesting take on the female archetype in myths as opposed to the usual maiden, mother, crone.”

Of her paintings of Greek goddesses and a small monster named Bantay, she says, “The mythological characters I based my paintings on were all cursed into a nonhuman form. So instead of depicting them as monsters, I chose to glamorize them.”

Pallon’s highly detailed paintings with bronze outlines of figures that are almost two-dimensional are heavily inspired by the art nouveau movement. The painter confesses adoration for the works of Gustav Klimt and Frida Kahlo.

Like her friends, she has a day job to support her art-making. Pallon, 26, does graphic design, photography, illustration, and makes and sells masks. Her online shop for the latter is at www.incoldmirrors.multiply.com and www.midnightmask.wordpress.com.

Like the women on the walls, the four are not to be messed around with. They’ve studied boxing. Pallon and Shen are into jeet kune do, a mixed martial arts sport practised by Bruce Lee. They say it’s still not well-known, but it has real-life application.

Pallon says, “It’s a real world out there with no rules, no referees.”

So should she and Shen ever have to defend themselves against an attacker, they will go for the eyes, groin and other vulnerable spots without a second’s hesitation.