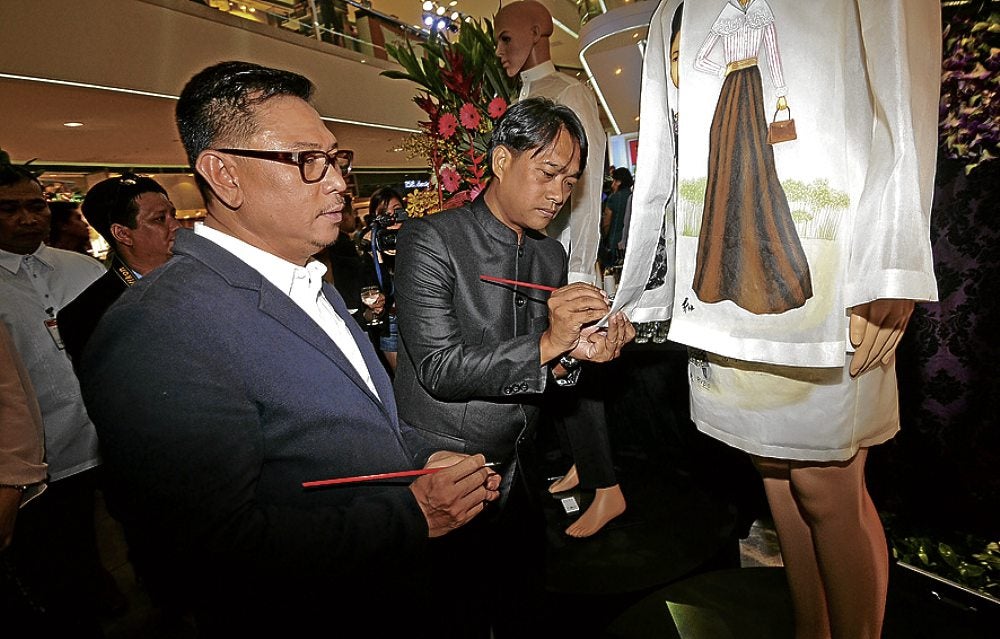 PERALTA and Rubio, the evening’s two featured artists, sign one of two hand-painted barongs (left) auctioned off for the benefit of Operation Smile.

When art and fashion mix

Even if they belong to different disciplines, the two artists share one thing: a love for elaborate, Filipiniana-inspired fashion that harks back to the colonial era.

While Rubio expresses this fascination on canvas with paintings of his signature elongated human figures garbed in intricate native finery, Peralta channels it through actual models wearing his heavily beaded, embroidered, tiered and layered creations. They include a number of ternos, stylized Maria Clara dresses and barongs, made from such fabrics as piña, lace, cotton, tulle and Issey Miyake-inspired crinkled silk.

The exhibition/fashion show was presented by Gallerie Stephanie and directed by Robbie Carmona. It featured, among others, model-turned-media personality Wilma Doesnt, who wore Peralta’s winning piece—a heavily beaded gold column with strands of floor-sweeping bugle beads attached to the sleeves—at the 1994 Internacional Concour des Jeunes Creatuer de Mode in Paris.

“It’s a breakthrough piece for me, and I’ve kept and maintained it all these years,” said Peralta. “Imagine how happy and proud I was when Dominic decided to immortalize it in one of his paintings.”

Rubio, a native of Paete, Laguna, and a graduate of the UST College of Fine Arts, also has a considerable following among art collectors here and abroad.

Fresh from his successful ninth one-man show at SM Megamall, Rubio staged a series of well-received shows in Hong Kong, Singapore, Toronto and New York. His works have also been auctioned off in leading auction houses in Asia.

Oddly enough, the two had never met before they decided to collaborate a few months back. But their mutual admiration inspired them to draw from each other’s aesthetics as they beefed up and reworked their respective collections months before the show.

“We weren’t friends,” said Rubio. “But because of my interest in fashion, I’ve been following Peralta’s works for some time now. I’ve always admired his clothes. A gallery owner introduced us. We soon hit it off and decided to do a collaboration.”

Peralta is adept at doing contemporary Western-inspired pieces as well as clothes with a Filipiniana flavor.

“The period he focuses on is actually one of my favorite sources of inspirations,” he said. “I’m amazed at the amount of details he puts into his paintings. Since I had to rework a number of existing clothes to conform to the show’s theme, the challenge for me was to be able to achieve a balance that would reflect Dominic’s paintings and still be true to what I stand for as a designer.”

Peralta and Rubio also auctioned off two hand-painted barongs for the benefit of Operation Smile. Beauty queen Shamcey Supsup, an active supporter of the NGO, made a personal appeal for donations.

Even before their collaboration, Rubio had always maintained that there was a direct link binding fashion with the visual arts.

“The relation between fashion and painting is far from vague,” he said. “In fact, it’s a big one, especially in my case. My paintings always feature human figures dressed in period pieces. None of these would have been possible without my fascination and deep respect for fashion.”