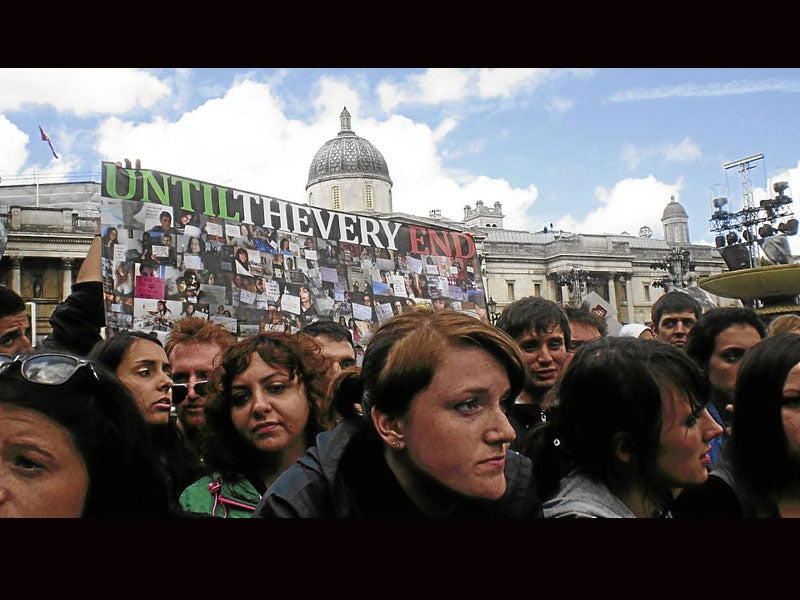 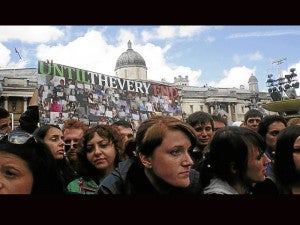 It was the perfect end to a childhood obsession.

It was Christmas in 1999 when Tata Enerio’s parents gave her the first three books of J.K. Rowling’s bestselling series “Harry Potter.” Tata was in fifth grade when she first read about the boy with a lightning-shaped scar on his forehead.

Like all other Potter fans in the world, Tata was bewitched by the story of the orphaned boy-wizard who became the savior of a magical world.

Although she doesn’t consider herself a “die-hard fan,” Tata said she knows all there is to know about the Potter universe. “I know the books. I’ve read them all. I’ve watched all the films,” she said.

In 2006, she went to Glenfinnan in Scotland where the scenes of the Hogwarts Express chugging along the fields towards the Hogwarts School were filmed. In 2009, she went to Lacock Abbey in rural Wiltshire, England, the location of the many Hogwarts scenes in the films.

But it was this month’s trip to London, her fourth time in this city, which became the highlight of her 12 years of being a Potter fan.

Tata, now 22, was one of the select few who attended on July 7 the premiere of “Harry Potter and the Deathly Hallows Part 2” in Trafalgar Square.

She won an online contest organized by Microsoft Singapore. Together with three other winners from Singapore, Thailand and Malaysia and the four blogger-promoters of the contest, Tata was flown to London, to the red-carpet premiere of the last installment of the “Harry Potter” film franchise.

It was only a two-night, two-day stay, but for Tata, it was the best Potter experience she could ever have. “It was … it is the perfect ‘Harry Potter’ experience,” Tata said in an interview last Monday. “It was the perfect end to this … phase? No, it wasn’t a phase. Lunacy?”

On the day of the premiere, Tata and the other winners were brought to Trafalgar Square an hour before it started. She found herself a bit unprepared for the trip after her whirlwind win. She knew about the competition only two days before it ended, and got her UK visa two days before her flight. “I wasn’t able to charge my camera. I didn’t have anything (pen or paper) for autographs,” Tata said, laughing at her little mishaps. 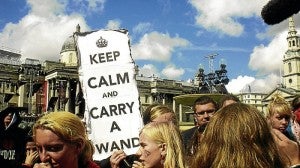 In Trafalgar Square, hordes of fans were already waiting for the “Harry Potter” stars to arrive. Some were wearing Hogwarts scarves and robes. Others were waving posters filled with the casts’ photos and statements like “Keep Calm and Carry a Wand” and “Until the Very End.”

“When we arrived, we were ushered into a VIP area for all the contest winners,” Tata said. They were the first group of fans that would see the stars when they arrived. What she did was to position herself near the entrance, with only the metal bars of the fence separating her from the red carpet.

When the stars came in the crowd went wild. The first to enter was Rupert Grint, the 22-year-old actor who played Harry’s best friend, Ron Weasley. “Rupert is my crush,” Tata revealed in between giggles.

“And then Matt (Lewis, who played Neville Longbottom) followed. He was so handsome! Of them all, he’s the most handsome,” she said.

What was a bit embarrassing, as she realized later on, was some of the fans there didn’t know the names of the actors who played these characters.

When Ralph Fiennes strode in, Tata said the Belgian fan beside her asked, “Who’s that?” while pointing to Fiennes. “I told her, ‘That’s Voldemort,’” she said, amused that the actor who played Harry’s archenemy was unrecognizable with a nose. 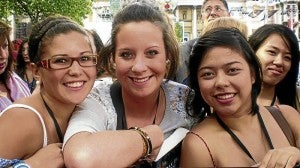 One star even voiced out this “anonymity” himself. Domhnall Gleeson, the Irish actor who played Bill Weasley, gamely laughed at himself.

“While he was signing autographs he told us, ‘Aw … guys, you don’t even know me. I’m just a ginger boy here,’” Tata said recalling the incident.

By the time Emma Watson, the Paris-born actress who played Harry’s other best friend Hermione Granger, walked in, Tata’s camera batteries ran out. “Emma came sometime in the middle toward the end,” she said.

Second to the last was Daniel Radcliffe who played the titular character Harry Potter (“He’s so short,” Tata said.). And finally, the author of the series, Rowling.

The most memorable meetings, however, were with Tom Felton who played Draco Malfoy, Helena Bonham-Carter who portrayed crazy Bellatrix Lestrange, and David Thewlis who played werewolf Remus Lupin.

When Felton arrived, he kept posing in front of the photographers with his back turned away from the fans. But as he approached the fans, Tata, with only a camera to remember this day by, told him, “Tom, can you smile for me?” “He said, ‘Sure,’ and gave me a wide smile,” she said.

She also had a short conversation with Bonham-Carter on the red carpet. Tata said she told the 45-year-old actress, “Helena, I watched your movie ‘Toast’ on the plane to London.” She replied, “Oh, yeah? That must’ve been weird,” Tata quoted Bonham-Carter saying. “I replied, ‘Yeah. It was weird, but it was enjoyable.’ She then told me, ‘I enjoyed making it, too,’” Tata said.

After the entrance of the cast, Tata and the rest of the contest winners were ushered to the theaters at Leicester Square.

Tata said she tried not to cry during the film. Even before the film started, while Rowling; David Yates, the director; the lead stars and producer David Heyman were giving speeches, she was already sniffling.

“I was already crying. I tried not to. And when the film started … I knew what was going to happen, but I was tearing up,” she said.

Back in Manila, Tata has realized that the story that became “one of the biggest parts” of her life is coming to an end. “It’s over. It’s really over,” she said.

But for Tata, it isn’t the end of Harry Potter yet. “I’m not saying goodbye. It was the perfect experience. And I just feel really, really blessed and grateful to have been there,” Tata said.