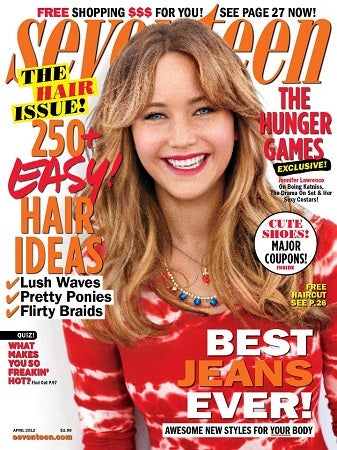 In a letter to readers in its August issue, editor Ann Shocket said the magazine, aimed at US teenage girls, is embracing a “Body Peace Treaty” set of guidelines to “always feature real girls and models who are healthy.”

“We vow to never change girls’ body or face shapes (never have, never will),” the guidelines said, although Seventeen will still tweak photos in order to smooth folds on garments or get rid of flyaway hair.

Seventeen also pledged to “be totally up-front about what goes into our photo shoots” by running before-and-after shots on its Tumblr blog (seventeen.tumblr.com).

“This is a huge victory, and I’m so unbelievably happy,” said Julia Bluhm, an eighth-grader from Maine who made headlines in May when she marched into Seventeen’s offices in New York with a 84,000-name petition urging it to commit to running one undoctored photo spread a month.

The petition, gathered online via Change.org, was supported by body-image campaign group SPARK Movement, which now has a separate petition under way to get a similar no-Photoshop promise from Seventeen’s rival Teen Vogue.