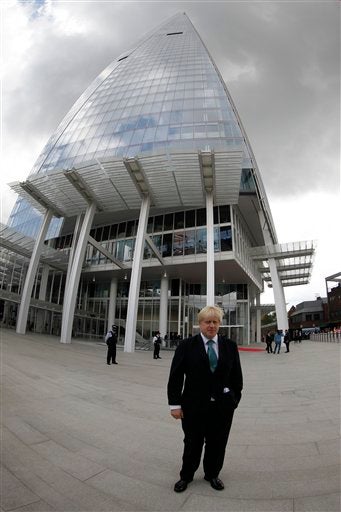 Mayor of London Boris Johnson poses in front of the Shard in London as he arrives for the inauguration of Western Europe's tallest building, Thursday, July 5, 2012. The Shard is 3010 meters tall (1,017 feet) and features high-quality offices, a 5-star hotel with more than 200 rooms and suites and three floors of restaurants. It will also feature exclusive super-prime residential apartments and the top levels will consist of the capital's highest public viewing gallery offering 360° views of London. AP PHOTO/SANG TAN

LONDON—Europe’s tallest skyscraper the Shard was inaugurated in London on Thursday in a dazzling sound and light show befitting its status as the capital’s brashest and most controversial building.

Thousands of Londoners gathered at vantage points around the city and lined the River Thames to take in the show, but the structure has been the source of heated debate during its gradual rise above capital’s skyline.

Twelve lasers and 30 searchlights lit up the night sky from the dramatic glass and steel structure – which stands 310 metres (1,017 feet) tall – connecting it to other London landmarks as the London Philharmonic Orchestra provided the soundtrack.

Prince Andrew said he hoped the building would give the local area “a huge new boost” during the formal ceremony.

London mayor Boris Johnson sang the Shard’s praises, calling it “a quite astonishing piece of architecture.”

“Of course it’s not like any piece of architecture in the city at the moment, but that’s the whole point about London,” Johnson told BBC radio.

But in a nod to Londoners’ split opinions on the building, he added: “I think it is important that we do not pepper-pot the city with skyscrapers everywhere. There’s got to be control.”

The Shard’s inauguration marks the completion of the exterior of the building, located on the south bank of the River Thames at London Bridge, while work on the inside is expected to continue into 2013.

The skyscraper, whose name was coined by its Italian architect Renzo Piano, is still significantly shorter than Dubai’s 828-metre Burj Khalifa, the tallest building in the world.

It takes over from Capital City Moscow Tower as the highest in Europe.

The 95-floor building has a glass facade covering the equivalent of eight football pitches, while the volume of concrete used in its construction could fill 22 Olympic-sized swimming pools.

It has capacity for 12,000 people and will contain a five-star hotel, 600,000 square metres (6.5 million square feet) of office space, luxury restaurants and shops.

The jagged-tipped skyscraper will also house 10 apartments, reportedly costing up to £50 million ($78 million, 62 million euros) each, which on floors 53 to 65 will be the highest residential properties in Britain.

“It will become as essential a part of a visit to London as going to the top of the Empire State Building is for visitors to New York,” said company chairman Irvine Sellar.

The building will open as a tourist attraction in February and more than 17,500 people have already registered interest online. Advance tickets are available from Friday.

But the building’s futuristic silhouette has angered traditionalists who say it has dwarfed older landmarks such as St Paul’s Cathedral and the Houses of Parliament.

English Heritage, the body responsible for protecting historic sites, says the skyscraper mars a view of St Paul’s, while UNESCO has said it compromises the “visual integrity” of the Tower of London, a World Heritage site.

One commentator compared the Shard’s impact on the skyline to the recent destruction of ancient shrines in Timbuktu in Mali.

“Timbuktu’s shrines can and surely will be rebuilt,” Simon Jenkins wrote in the Guardian on Wednesday. “The Shard has slashed the face of London for ever.”

Piano, who also had a hand in the design of the Pompidou Centre in Paris, has defended the building against claims it is an overbearing presence on the skyline.

“This building is not arrogant,” he told AFP in February.

“When you’re making a building like this, that’s so important for the city, you have to be absolutely sure that it’s the right thing to do… as an architect, if you make a mistake it stays there for a long time.”