The attack of the ‘Call Me Maybe’ lip-synchers | Lifestyle.INQ ❮ ❯ 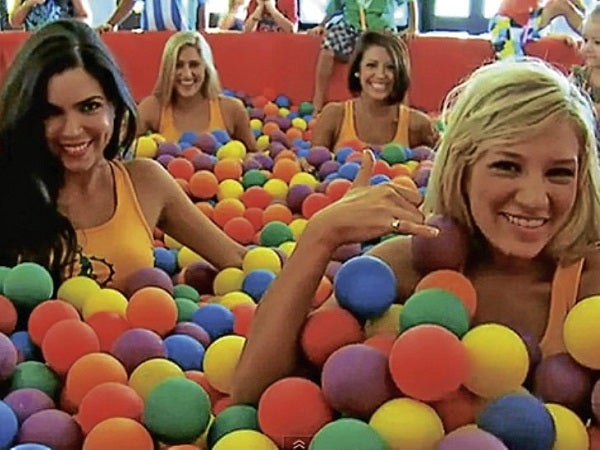 The attack of the ‘Call Me Maybe’ lip-synchers

There is no doubt about it— when it comes to lip-synching, newcomer Carly Rae Jepsen’s “Call Me Maybe” is the hot favorite.

So which versions rock and which ones suck? Check these out.

Twenty pretty and sexy cheerleaders in skimpy swimsuits lip-synching to CMM—no wonder the vid has over six million views. Actually, it doesn’t really matter which song the girls choose to lip-synch along to. Press the mute button and guys won’t mind.

Nothing special, really. Just a video of some of today’s hottest teens fooling around: Ashley and her cheerdance moves, Selena proving just how cute and lovable she is, plus a seriously sexy JB busting out some moves of his own. Too much pushing, though. And fake moustaches.

Looks like the purple-haired Katy is a huge fag hag, based on her CMM video, which features a looot of hunky gay men. She ends the vid with “I love you, Justin Bieber,” and while some people thought that she was mocking Carly Rae, Katy’s actually “paying homage” to Justin Bieber, the fellow Canadian singer Carly Rae once opened for.

The charming actor, who looks like a drunk caveman in the video, starts off lip-synching to the song—complete with the expected gestures—but eventually gathers confidence and sings, most of the time in falsetto. The audio is terrible so watch only if you’re a huge Franco fan. And oh, don’t think he’s driving and manning the cam at the same time; the car’s just parked.

College boys doing their business in the CR, boybanding, eating at the cafeteria, buying food from the convenience store, and then singing in the shower room—topless and wet! Definitely one of the better “Call Me Maybe” vids out there.

The pageant girls show their fun side by lip-synching and dancing to CMM. All of them end up as thank-you-girls, however, once Donald Trump appears onscreen and shows everyone how it’s done.

Another case of straight guys trying to be cute and funny, and while some of them get away with it (like the cute and young-looking guy in red, second row), most of them do not, especially when they start doing that bagel dance, which is something alien to the rest of the world.

YouTube stars Jamich hang out with their friends from Chicser and lip-synch to CMM and show everyone how Pinoy teens have fun: Eating tapsilog, killing time in Mini Stop, and just goofing around. This is a fun vid to watch.

Almost your typical CMM cover shot inside a moving van—except that there’s a lot of footwork involved. Kinda makes you wonder, though, are these girls really rowers—or synchronized swimmers?

According to the YouTube blurb, A&F asked guys from their flagship stores to film themselves using their phones while having fun with the song and doing whatever came naturally. What came naturally for the guys was taking their tops off and flaunting their perfect bods while riding a merry-go-round, jumping in front of a church, and walking in the subway. It features mostly bad lip-synching and equally bad dancing. But do we care? Of course not. Now if only the Masculados had their own version …

Shot in four days in between six play-off games, this vid features the Staples Center staff all having fun and not looking stressed at all: Chefs, cheerleaders, photogs, ushers, sportscasters, and even the mascot. Don’t forget to spot the hot Asian guy in red!

Filmed inside a moving bus, this rendition features repetitive choreo, a pathetic guy doing an unimpressive ribbon dance using tissue paper, and an uncooperative member at the back of the bus. Good thing the lead guy is hot. Wish he did an Abercrombie & Fitch, though.

Georgina Wilson and other beautiful beings

Watch and get jealous at how Isabel Daza, Solenn Heussaff, Anne Curtis, and their other gorgeous friends try to make fools out of themselves—and still end up lovely and sexy. Not into girls? Thankfully, hot men participate, too, but it would have been a perfect video had they taken their shirts off and gyrated the way the girls did. Best part: Manny Pacquiao cameo!  Niño Mark M. Sablan, Contributor, Philippine Daily Inquirer