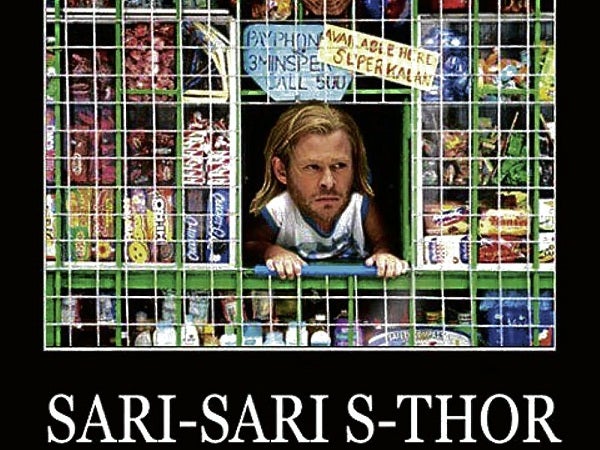 It’s already Spider Man week in the cinemas, but Thor has been making rounds online with crazy memes.

Pinoy memes, in particular; apparently, there are many Filipino words that could be associated with the Marvel superhero Thor.

Thor’s face and body have been superimposed on everyday objects from bolts (“Thor-nilyo”) to belts (“sin-Thor-on”). He was also transformed into animals such as a hammer-wielding tarsier (“Thor-sier”) and a turkey (“Thor-key”).

We also see Thor on board a bus as a “kundok-Thor,” and as a ridiculously good-looking blonde guy manning a “sari-sari s-Thor.”

Hungry? How about some crispy-fried “Thor-on” for snack, or “Thor-tang talong” with rice? Have some “Thor-betes” for dessert, and your spare change could even buy you some “ice wa-Thor.”

This viral Thor-ization of stuff started out abroad with quips like “calcula-Thor,” “jani-Thor,” “Termina-Thor.” We can’t exactly pinpoint how it came about locally, but we’re glad to see manipulated Thor photos turned into witty posts on our Facebook Wall, Twitter feed and Tumblr page.

Along the way, we also saw a very green Hulk hurling large pails of taho on both shoulders—as a magtata-Hulk. Nakaka-Loki, right?