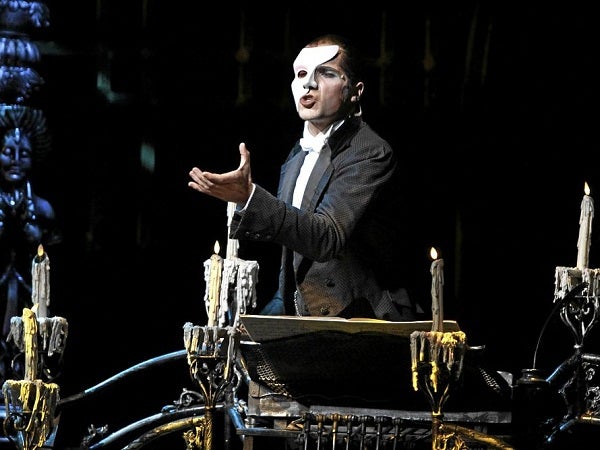 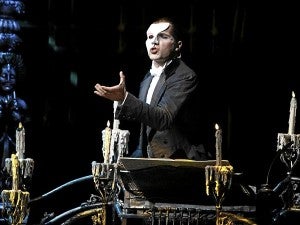 Jonathan Roxmouth first fell in love with theater when he played “a very tall munchkin” in a nursery school production of “The Wizard of Oz.” Years later, in 2005, when the Barnyard Theatre Group held auditions for a production of “Grease” in South Africa, Jonathan knew he had to audition.

When he was cast as Vince Fontaine and the Teen Angel, his mother said, “You can have a gap year to get theater out of your system.”

It’s been seven years and Jonathan is still on that gap year, with his love for theater showing no signs of abating. Those seven years were well-spent—he has played numerous roles in productions in South Africa including Munkustrap in “CATS,” Danny Zuko in “Grease,” Gaston in Disney’s “Beauty and the Beast,” Wolfgang Amadeus Mozart in “Rock Me Amadeus,” Lun Thua in “The King and I,” Buddy Holly in “The Buddy Holly Story,” Judas Iscariot in “Jesus Christ Superstar,” and has toured New Zealand and Hong Kong as “Grease’s” Danny Zuko. These performances did not go unnoticed—he has received nominations and awards and was given the 2008 Fleur Du Cap for Best Performance in a Musical and the 2008 Naledi Award for Best Performance in a Musical for his role as Gaston.

Jonathan’s most recent award is for his portrayal of the mysterious Phantom in “The Phantom of the Opera,” a role he has relished since October 2011. He was given the 2012 Fleur Du Cap for Best Performance by a Leading Actor in a Musical.

It’s a performance audiences in Manila will soon get to enjoy as Jonathan travels with the rest of the cast and some members of the crew to the Philippines for a limited run of the production at the CCP.

Super spent time with Jonathan at the Teatro at Montecasino, the Johannesburg home of his Phantom, to talk about his role, Lea Salonga, and why he thinks you should watch “Phantom of the Opera.”

Encouraging. We’ve got about four or five theaters just in Jo’burg and at any time there’s always a dance show, there’s always a play, there’s always indigenous work, there’s always a big-scale musical and across the road there’s a theater complex with a 400-seater and a 150-seater and what happens there are bonsai musicals. We had “Evita.” They’ll take what is usually huge and condense it to about 18 people and find the essence of the show. Very often, those are more impactful to audiences.

Was Phantom a dream role for you?

When I saw the original production here, actually in Pretoria, by the time the curtain came down, I knew on some level it was a role that, come hell or high water, I would play, no matter what. And it happened. Not only did I get the dream role, but in my opinion, compared to that production, I got the dream cast as well. This is the thing—and people don’t understand—we have a relatively young theater world here. In 2001, “CATS” came for the first time and really changed the musical theater scene because we hadn’t had big productions like that for a while. I’m very cognizant of the fact that when “Phantom” first came, our industry was still very young in terms of finding its feet and distinguishing the difference between musical theater performers and technicians who just knew how to sing. Seven years later, we have real triple threats. We don’t just have opera singers on stage, we have opera singers with acting instincts. We have dancers who can sing and can act. If you look at the corps de ballet that Meg heads up, each of those girls can sing and they can dance. I think it’s wonderful to be in a version of “Phantom” where we’re serving more than just the score. I think that’s very important for the show.

Everyone’s seen the show in one form or another, how do you deal with the pressure?

“Phantom” has been around for 25 years and what can happen in long-running productions like London and Broadway, not that they are inferior productions, but you can see that they’ve been there for a while. The beauty about a new production like this is everything’s fresh. Our director Arthur Masella made it very certain that we were clear that the thing about the show, the way it’s written, it will always be a good show. What makes it a great show is the freshness that people who are doing the show for the first time can bring to it. We’ve got that down so well. We did a production in 2004. A small percentage of our cast know what it’s like to do the show. But for the majority, it’s the first time we’re doing it and I think that translates into our performance and our energy as well.

Why do you think “Phantom” is such a hit all over the world?

There’s something about the Phantom himself. There’s something about an audience coming in here, it’s usually 1,800 different people who usually don’t know each other and there is always somebody in that audience who relates to that whole thing of being alone or excluded or turned down. It rings a bell with them. It’s not just that the show is such a spectacle. Hammerstein had this quote, he said, “For a musical to be perfect, the orchestration should match the costumes.” And in this production, I certainly think that the audience isn’t just hearing something phenomenal, they’re seeing it as well. And when those two things come together, I think it’s inevitable that the audience is going to fall in love with it.

Is playing Phantom a big challenge for you?

It’s up there—Valjean and Phantom are the two pillars of the great musical roles. Everybody knows how the Phantom is meant to look, sound, act, behave, cry, smile, laugh. There’s such a pre-conception to the role. People either know Michael Crawford or Anthony Warlow or they know Ramin Karimloo. All these Phantoms of the past have stamped the role as their own that there isn’t much left to make your own. You really have to be creative to avoid being a copycat because you don’t want to do that either. So it’s a tightrope. Over and above that, you’ve got to whack out seven A flats every night, full volume, power, all that spiel, hide in angels and climb ladders. Everyone goes on about the vocal toll but I found the physical toll is a lot more than I thought it would be. It really takes a toll on your body. You are constantly being told “We need you to be a little more wild.” To maintain that madness eight times a week when you’re not is difficult. I go through about four liters of water throughout the show.

What did you base your version of the Phantom on?

I prefer to do what’s good for me and what I can do eight times a week. It’s all very well if you can mimic Anthony Warlow but if you don’t have Anthony Warlow’s voice, it won’t sit on you properly. That was part of the six-week rehearsal we had—finding what is a more natural fit and what is sustainable in the long-term. People either remember that breathy Michael Crawford and Anthony Warlow comes along with that extraordinary sound.  If you don’t have that, there’s no point in trying to recreate that. Anthony (Downing, who plays Raoul) and I actually discussed this in rehearsals. You get so bogged down in listening to the original cast recording. He was listening to Steve Barton, I was listening to Michael Crawford. Eventually, we turned to each other and said, “It’s not working, I can’t do it.” You just have to trust your own sound. That’s not just true for the Phantom, it’s true for everybody. As a tenor, Piangi (Thabiso Masemene) has some of the hardest verses in the show. You wouldn’t think it because he makes it sound so easy and we hate him.

What do you love about “The Phantom of the Opera”?

I get to sit there for a long part of act one and I get to see the audience. What’s always amazing to me is these people, whether they’re old, young, blind, deaf, whatever, they all have the same reaction to the show and they go back to this place of make-believe. In real life, it’s difficult to find the fantasy and “Phantom” just hands this to you on a silver platter and people go with it. I don’t think there’s been one performance where the reaction isn’t what we know it to be. Sometimes it’s softer because they’re old but the fact is you stop seeing the differentiation between children and old people. They all become the same audience. I think it’s timeless.

It’s going to be your first time in the Philippines—what have you heard about the country?

Well, everybody in musical theater knows Lea Salonga. I don’t want to want to sound like one of those cliched, “Oh my god, she’s so amazing.” But she really does represent to a lot of people, male or female, that work ethic that just sets her apart. We’re talking about that girl, in that documentary, who asks that guy to sign the “Les Mis” poster and years later she’s playing Fantine in the 25th anniversary concert. There’s a story in there—that’s incredible.

Why should people in Manila watch “Phantom”?

I think you just answered your own question. Because it’s “Phantom.”  There is nothing and there will never be anything like “Phantom” ever again. It stands alone and I think it defined a generation of musical theater.

“The Phantom of the Opera” is brought to you by Lunchbox Theatrical Productions, David Atkins Enterprises, Hi-Definition Radio Inc., and Concertus in association with The Really Useful Group. For tickets, call Ticketworld at 891-9999 or visit www.ticketworld.com.ph.