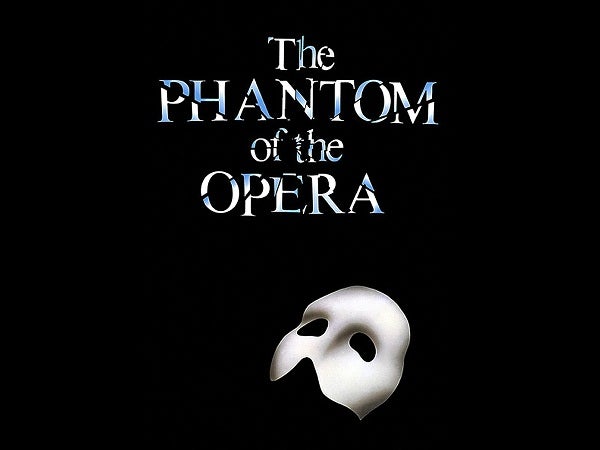 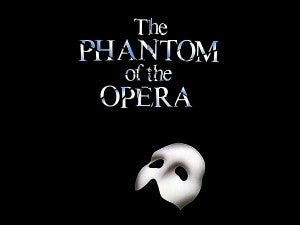 Am I supposed to like the Phantom?” I whispered to Concertus managing director Bambi Verzo, who was sitting next to me.

“Wait for the second act,” she said with a smile.

I asked because I was worried—was I really supposed to be rooting for the masked menace?

We were at The Teatro at Montecasino in Johannesburg, South Africa, and I was watching “The Phantom of the Opera” for the very first time.

For 31 years, without really meaning to, I had managed to avoid all incarnations of “The Phantom of the Opera.” I didn’t read Gaston Leroux’s novel, I didn’t watch the 1925, 1943, 1962, and 2004 films. And during trips to Broadway, I neglected “Phantom,” finding myself gravitating towards newer productions like “Wicked,” “Next to Normal,” and “How To Succeed In Business Without Really Trying.” I am now ashamed to admit that before Johannesburg, the closest I had come to enjoying “The Phantom of the Opera” was listening to an aunt and uncle sing “All I Ask Of You” at a relative’s birthday party. 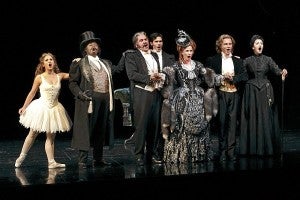 My brother has been much smarter. Since 2002, at the age of 17, he has been obsessed with “Phantom.” It’s an obsession that led to the fulfillment of what was his ultimate dream—to watch the show on Broadway. It’s an obsession that continued long after he left New York. He watched the show in Las Vegas too and when selected cinemas screened “The Phantom of the Opera’s” 25th anniversary performance, he watched twice.

It’s an obsession I understand now.

The intermission ended, the second act continued and—sorry, Christine, sorry, Raoul—I rooted for the Phantom all the way until the curtain call. “Phantom” had succeeded—it was seduction by opera and I was a willing victim.

And I’m not the only one.

Since Andrew Lloyd Weber’s musical version of “The Phantom of the Opera” first opened at Her Majesty’s Theatre in London in 1986, an estimated 130 million people have enjoyed the show worldwide. It remains to be the longest-running show on Broadway. The musical has won over 50 major theater awards, including seven Tony Awards and three Laurence Olivier Awards. Its worldwide gross has exceeded $5.6 billion, a box-office revenue higher than any other film or stage play in history. “The Phantom of the Opera” has been translated in at least 15 languages and produced in 145 cities in 27 countries around the world including  Australia, Holland, New Zealand, Japan, Germany, Brazil, Switzerland, Mexico, and Russia.

Soon, the Philippines will be added to this list.

Lunchbox Theatrical Productions, David Atkins Enterprises, Hi-Definition Radio Inc., and Concertus in association with The Really Useful Group will be bringing the show to Manila for a limited run at the CCP Main Theater from Aug. 25 to Oct. 14. This haunting tale of love and music will be winning even   more hearts in Manila. In just a couple of months, audiences will be transported to the Paris Opera House to witness how a disfigured musical genius becomes obsessed with his beautiful protégée.

Hours before we watched the show, Johann Kupferburger, the company manager of the South African production team, took me, Bambi, and a few other Filipino journalists on a backstage tour.

Our first stop was the stage. He said, “This is an exact replica of what’s in London, what’s in New York. This is the exact same set. This is the touring set that has toured before and it takes about two and a half weeks to put up.”

Everything I was looking at then, everything they’d need to recreate the show in Manila will travel in 22 40-foot containers. “That includes the set, the lighting, the sound, the costumes, everything, absolutely everything,” said Johann.

We turned our attention to the majestic chandelier that is the centerpiece of the “Phantom of the Opera” set. Johann said, “That’s the famous chandelier. It’s 750 kilograms, nearly a ton, and it will travel in its special case to Manila as a unit. It falls to the stage one and a half meters per second every night.”

I stared at the floor and looked at the deep scratches left by the chandelier’s unbreakable crystals.

We then walked to a big dressing room used by the ensemble cast. It was a visual feast—there were wigs, masks, hats, and closet after closet of elaborate costumes and shoes. Johann spoke about how they continue to follow the blueprint of the costumes that were created by Maria Bjornson, the show’s brilliant production designer, 25 years ago. “When we needed a new suit for Phantom, we used the same material used 25 years ago. We had to order the pure silk from Scotland,” Johann said. 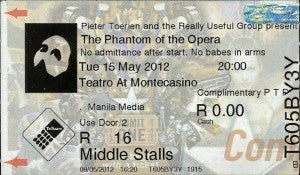 He also showed us Phantom’s incredibly detailed Red Death costume, which was crazy heavy. We wondered how Jonathan Roxmouth, who plays the Phantom, is able to move in it.

We learned more about the clothes from Eugene Titus, head of the wardrobe department and one of the 110 cast and crew members flying to Manila in August. He said, “Everything is custom-made for the show. Nothing is copied or anything. We use the same fabric as 25 years ago.”

There are 20 people in Eugene’s department. “It takes 20 of us to get the show on every night. We wash like 200 shirts a day. We wash them and we starch them so the collars are stiff, they’re very specific. We do shoes, we do hats, we do jewelry.”

Given that “Phantom” is a very active show, reattaching beads that get snagged or fall off during the performances are one of the big tasks of the wardrobe department. Eugene said, “It takes eight hours sometimes, all the beading. Everything is hand-beaded, even all the chains.”

When Eugene arrives with his team in Manila, they will be bringing with them everything they need—the washing machines, dryers, beads, heels, even the shoe nails. “It’s just safer that way,” he said.

It was fascinating to see how much work goes into producing a show as spectacular as “Phantom”—no detail is left unattended.

The night before we were scheduled to leave Johannesburg, I was dozing off when I was jolted awake by the sound of “Phantom’s” soundtrack blasting from my hotel TV. It was a short feature on the making of the musical, a behind-the-scenes look at the South African production of “Phantom.”

“The show is so technical and could be so dangerous …” “It’s a very demanding show …” “It’s fresher and more exciting because we’re starting from scratch …”  “… our people are every bit as good as the people in London.”

I heard these words as I drifted off to sleep again.

Back in Manila, friends asked, “How was the show?”

But “great” doesn’t cover it. My first “Phantom” experience in South Africa kicked off what has become a real obsession.

I now have two versions of the complete soundtrack in my iPod—the original London cast recording and the 2004 movie soundtrack. I finally watched the 2004 film starring Emmy Rossum and Gerard Butler but it took me way more than the 143 minutes it should have taken me to finish it—I kept watching my favorite parts over and over again. (Even though Margaret Preece sang for her, I loved Minnie Driver as Carlotta and, thanks to the film, I’ve finally developed an appreciation for Gerard Butler.)

“Think of Me” has officially become my shower song. “Masquerade” always puts a smile on my face. “All I Ask Of You” makes me want to cry. “The Music of the Night” gives me chills. That overture is enough to get my heart racing.

I’ve watched “Phantom” clips on YouTube, I visit “Phantom” fansites, I even found myself Googling for “Phantom” fan fiction. I am planning to abandon the book I’m reading so I can focus on Gaston Leroux’s original novel. I will watch the Broadway production the next time I’m in New York. When I’m done writing this article, I will relax by watching the 25th anniversary performance at Royal Albert Hall.

I asked the cast members I met what they love about “The Phantom of the Opera.” Their answers were varied. The music. The relatability. The fantasy. The timelessness.

I love all these things and more. I love the roller-coaster ride the show takes you on. How it pulls you out of reality and transports you to a different time and place. Christine’s naiveté, Raoul’s earnestness, the Phantom’s complexity. The story’s ability to make you fall in love and crush your heart at the same time. The exhilarating mix of horror, romance, comedy, and drama. How it will grip you and refuse to let go. The songs you can’t shake off, the music that stays with you long after you leave the theater, long after the credits roll. How experiencing it once is just not enough.

I cannot wait to enjoy the Manila production.