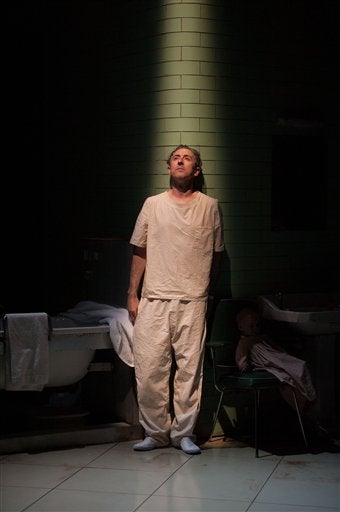 The production, which started in Scotland in mid-June before coming to New York for the next few days as part of the Lincoln Center Festival, is being undertaken under the watchful eyes of directors John Tiffany and Andrew Goldberg. That’s right: There are more directors than lead actors.

“There’s a fearlessness there that means that he’s unpredictable. It’s also the fearlessness that makes you want to embark on a project like this with him even though it is nuts and even though you are climbing a mountain with no legs,” he says. “You know he’ll never waiver. He’ll never give up.”

“Macbeth” has a special poignancy for the 47-year-old, who made his professional debut playing Malcolm in “Macbeth” in Glasgow in 1985. It also likely marks an end for him and the Scottish play.

“I don’t think I’ll be doing ‘Macbeth’ again in my life. I mean, I might do this again, but I doubt I’ll do another production of ‘Macbeth’ again. I think I’ve got it out of my system.”

The “Macbeth” he’s brought to Jazz at Lincoln Center’s Rose Theater is part of this summer’s scintillating Lincoln Center Festival, which also includes Cate Blanchett in a production of “Uncle Vanya” and performances by the Paris Opera Ballet and three plays by Tom Murphy.

Running only an hour and 45 minutes with no intermission, this “Macbeth” has been trimmed. The directors say they’ve cut for clarity and that means some characters have been exiled, including the Porter and one of Duncan’s two sons. But they insist they’ve honored the playwright.

“It might be some people’s first time ever seeing Shakespeare and this play, so we don’t want to mess around,” says Tiffany. “What we’ve done is try to honor the story by setting it in a context that an audience has a different way in.”

He says playing all the parts has shed light on ones he’s never played and made him warm to the title character. “This production definitely has made Macbeth seem — not sympathetic, necessarily, because you hear of these terrible things he does — but you can see someone who was quite damaged to begin with getting more and more damaged,” he says.

Using a mental patient as the framing device makes intuitive sense for “Macbeth” since the play is filled with visions — “Is this a dagger which I see before me?” — and references to addled brains. “O, full of scorpions is my mind,” Macbeth tells his wife at one point. The team was careful not to push the point, however, and sought advice from a psychiatrist from the Royal Infirmary of Edinburgh.

“Obviously, I think when you do anything like this, you worry that you’re going to tip into bad, crazy acting and mumbling and talking to yourself in straitjackets,” he says. “We’ve tried to avoid that.”

Goldberg says watching a modern man suffer what Macbeth goes through is a way to make the savagery in the play, which often feels mythologized and removed, more urgent.

“What we’re trying to do, I suppose, is bring those acts of violence close to home to get into the actual darkness of them, the terror of them, the reality of them,” he says.

“I have in my life played several parts, like this one, where I’ve had to go to a very, very dark place. Early on in my career, I wasn’t able to stop the darkness and my real life had a kind of a fumble, shall we say. Since then, I’ve been very, very aware of that.”

He survived “Bent” by not dwelling on the horror and by surrounding himself with comforts from home. He’s careful each night after playing Macbeth — actually ALL of “Macbeth” — to bounce back as best he can. “I don’t switch it off but I make a conscious effort to be merry.”