It takes a village | Inquirer Lifestyle 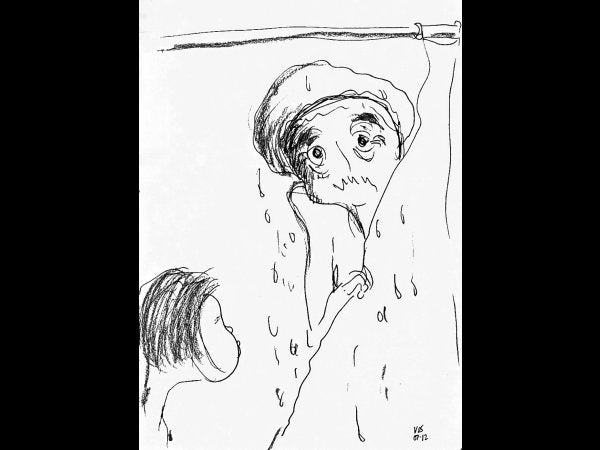 It takes a village

“It takes a village to raise a child,” Hillary Clinton has famously said. So here we are, my daughter and I, sleeves rolled up, doing exactly that for my four-year-old and youngest granddaughter, Mona, along with her single-parent dad.

One would think my age and experience, having raised four of my own, of whom Mona’s dad, Tex, is the youngest, and my only daughter, Gia, the eldest, would put me in charge. As it happens, even in that respect, seniority has its disadvantages.

Memory alone is one: Everything seems vaguely familiar yet frighteningly new. And what usefulness and strength I have retained prove chiefly good only in ensuring my constant, loving presence as well as that of my husband, to whom Mona is a mere step-granddaughter but who just happens to love children in a big way. We make ourselves available for everything as the need arises, and we can only count our blessings in time and resources that have come with old age.

It all began when Tex came home with a four-month-old. I was, of course, overjoyed: An American citizen and soldier, he had been spared a stint in Iraq, and a Hawaiian court had given him custody of Mona after her mother, a married woman and already a mother to an older daughter in the marriage, had signed a waiver, with her husband’s consent. Temporary legal guardianship was granted Gia while Tex settled his way out of the US army to come home for good.

Gia comes to the role with more than fitting credentials—a preschool teacher with a degree in Psychology (University of the Philippines), a Masters in Education and Special Education (Boston University), and now a school of her own (LEAP—Learning Experientially through Appropriate Practices); not to mention, a mother of three, two already in college.

No dispute, Gia is our village chief. She calls the shots in matters of discipline and education; indeed, all matters involving mothering that Tex by nature can’t do all by himself—she reads to Mona and takes her along while doing chores, at the grocery most often. It helps that Mona looks very much like her.

In fact, knowing what I know now from Gia makes me wonder how my children survived my mothering, one done by ear or rote and anchored on blind faith in Dr. Spock and his bible—the bible of my generation of mothers. 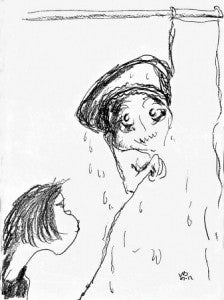 Gia dispenses guidance within the attentive-hearing distance of Tex, a fast learner himself, who, if guilty of any remissness, commits it for being a new, overprotective, over-loving dad.

I am myself inspired and energized by the challenges our village of three has taken up, with the help of peripheral villagers, in particular, Gia’s own daughters, Rory, 17, and Maita, 12, and her favorite uncle, Bob, my oldest boy.

But the sweetest inputs come from the little subject herself, who constantly imagines herself a princess whose dresses have to be “perfect” for the ball, as the story goes, while being un-princess-like in her fascination, say, with public toilets. Once inside the ladies’ room, she becomes most intimate and chatty, probably feeling she ought to entertain me while I wait.

When I begin to wash her, she wags a finger at me, “Uh-uh, you mustn’t touch me there, Mamita.”

I may not have been so sure indeed, recalling that when I had to collect midstream urine for a lab test I came up with an almost empty specimen bottle.

Before the start of school, her dad and I take her to Dr. Ma. Cristina Santos-Tuazon, Vergel’s daughter and herself a critical, if peripheral, part of the village. She is getting her flu shot un-forewarned. Quickly smelling danger, she announces she needs to poo. Her trick found out, she fights, screaming, as though for her life. A psychologist herself, Dr. Ayis advises us adults to prepare her next time with promises of some reward or special treat, that, of course, we must keep.

On the way out of the hospital, Mona and I find ourselves in the bathroom again. This time she comes up with an informed observation: “Mamita, you and I go to the girls’ bathroom, Daddy and Tito Vergel go to the boys’, right?”

“Yes, but do we really need to be here?”

“Shhh, quiet Mamita, can you pound my lap?” She means for me to pound with my fists just below her knees, a poo-inducing trick she has learned from Tito Vergel’s folk tales. I squat to oblige.

Suddenly someone enters the next cubicle and produces a rather industrial-sounding splash.

“Hey, what’s going on there?” Mona shouts, and it’s my turn to shush her. She knocks on the wall and jumps off the toilet seat.

“Wait, let me clean you first.”

“But I didn’t, Mamita, look,” she points to the clean bowl.

Back home, I really ought to know better than to leave her in the care of her dad and Vergel while Wimbledon is on TV and I’m in the shower. She walks into my unlocked bathroom, draws the shower curtain, and sees me naked but for a shower cap. She looks surprised; I am petrified.

She flies back to the living room, demanding an explanation: “Why is Mamita wearing a hat in the shower?”