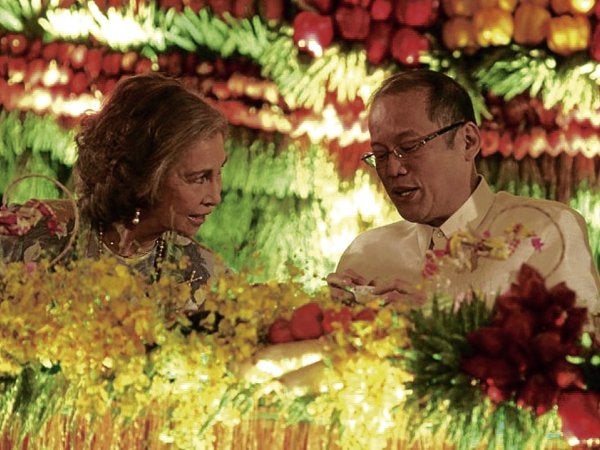 Instead of using huge crystal candelabras and other traditional European decor, Malacañang chose to adopt the popular “Pahiyas” fiesta of Lucban, Quezon, as theme of the state banquet held in honor of Queen Sofia of Spain last Tuesday.

And the visiting royal apparently felt at home amid the rich colors and textures of Philippine harvest that decked the Rizal Ceremonial Hall at the Palace.

She was impressed with the kiping that was turned into huge table centerpieces, and with the pastillas wrapped in intricate sarimanok-cut paper. The pastillas were the evening’s giveaways for guests.  The Queen herself   gladly accepted to bring home some of these sweet pastillas.

The Pahiyas festival is known worldwide for gaiety, color and sense of bounty. It celebrates the local folk’s tradition of offering and displaying their harvests. It is said that in the olden days, the farmers would offer some of their bountiful harvests to the friars who, having had a fill of this native produce, enjoined the farmers to festoon their homes instead with the yields of the earth. That was how the façades of homes came to be decked with fruits, vegetables and colorful kiping or rice wafers.

Instead of transporting the kiping all the way from Quezon, the kiping makers of Lucban assembled everything the day before the banquet, right at the Palace itself. The fragile kiping would have been ruined during delivery.

The sampaguita strands were made by artisans from San Pedro, Laguna. It took them two days to string and install the sampaguita at the Palace.

Indeed this was one state occasion whose grandeur was the creation of Filipino craftsmen and artisans. At the forefront were not the professional stylists or designers, but anonymous local hands.

Performing at the banquet were Leo Valdez, Rachelle Gerodias, The Kalilayan Folkloric Group (dancers made up of children from grade school and high school from the boys’ and girls’ town in Silang, Cavite), and the Philippine Philharmonic Orchestra with maestro Olivier Ochanine as conductor.

At the dinner table, the Queen told President Aquino how she loved the performance, and reiterated her invitation to him to visit Spain. The President also extended anew the invitation to Spain’s Crown Prince Felipe to visit the Philippines.

The Queen also recalled to Aquino that she spent her honeymoon in Manila, and that many years later she met the President’s mother, President Cory Aquino. The Queen expressed her wish to meet Aquino’s sisters at the banquet. She was introduced to Ballsy, Pinky and Kris. The other sister Vien was not around.

Aquino said the Queen is Spain’s “perfect ambassadress. She has no airs at all and is very warm and gracious.”

Not generally known is the breadth and depth of Spain’s assistance in the Philippines. Its Official Development Assistance projects cover so many fields, from disaster relief to housing, culture, education, health, poverty alleviation.

For instance, Spain funded the Escuela Taller in Intramuros, which trains the youth from informal settler areas, in the restoration of cultural heritage sites.

In Albay, Spain sponsored the establishment of the Climate Change Academy in Legazpi City. Its work spanning studies, research and training, it benefits national agencies and local government units.

The Spanish-Philippine ties apparently have never been stronger. It was just apt, indeed, that the banquet was a rich, colorful harvest.