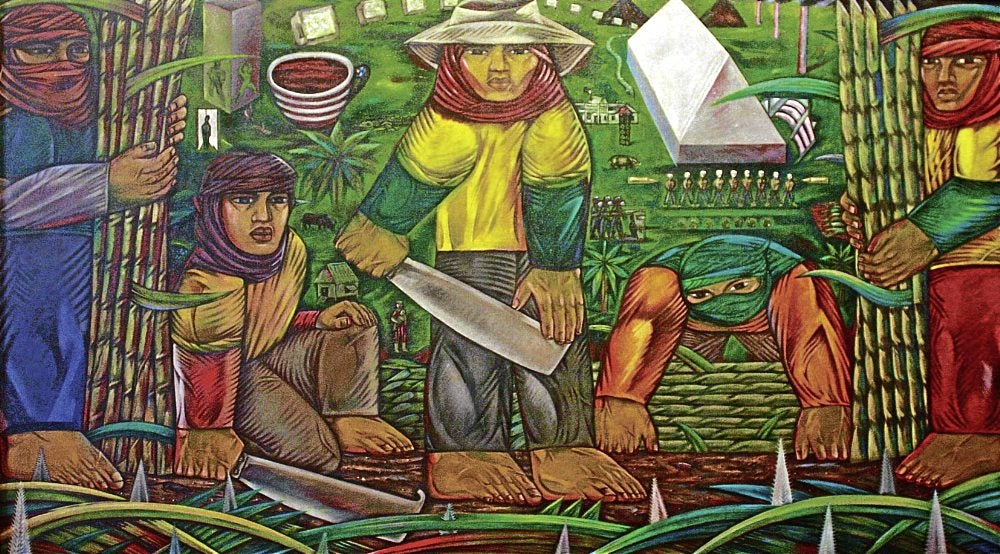 In matrimonial matters, the ruby marks a couple’s 40th year since tying the knot.

In Philippine history, 2012 marks the 40th anniversary of the proclamation of martial law, and the gem’s blood-red tinge is the ideal allusion to the human-rights atrocities that took place during the authoritarian rule of Ferdinand Marcos.

If only because of the dark episode, the people, especially artists, are perennially bound to remember it.

Citing “clear and present danger” posed by enemies of the state, Marcos issued Proclamation 1081 on Sept. 21, 1972, and put the country under martial law. Then ensued the dark years of the dictatorship which became a rich mine for artistic rumination and powerful protest by Filipino artists.

“Art has always reflected society and the conditions in which people live, at the same time that it has contributed to the process of social and historical change,” art critic and historian Alice Guillermo said. “During the Marcos regime, an observed cultural phenomenon was the emergence-development of protest art in various forms.”

To raise historical awareness about martial law, especially among the younger generations, the Liongoren Gallery and the Center for Art, New Ventures and Sustainable Development (Canvas) have organized the exhibit “ReCollection 1081: Clear and Present Danger (Visual Dissent on Martial Rule),” which opens on July 14, 4 p.m., at the Cultural Center of the Philippines’ (CCP) Bulwagang Juan Luna and Pasilyo Guillermo Tolentino.

The exhibit is part of Piglas, a series of art events in the CCP to mark the 40th anniversary of the declaration of martial law.

“How can we make the youth remember pivotal events such as the Edsa Revolution if we ourselves forget Martial Law?” said Canvas officer Delan Robilos.

De la Torre was one of those who went underground during the Marcos regime. Two of his works,  done inside his prison cell in Camp Bago Bantay during martial law, will be part of the exhibit.

BenCab’s contribution to the exhibit is an original piece done during martial law but set against a reworked digital drawing of the same work.

BenCab’s work embodies the exhibit’s strategy of triggering a dialogue between past and present, between those who lived through martial rule and those who did not.

The show will try to provide  diverse perspectives on a dark chapter in Philippine history, conveying them to audiences through various media and genre styles, which overall should allow those who lived during that time to reminisce and those who live vicariously through them to sift through the raw material and heed the lessons of history.

“We always make it a point for our projects to provide themes that can help stimulate discussions on  important social issues,” said Canvas executive director Gigo Alampay.

“It should not stop at this,” said Norma Liongoren of the Liongoren Gallery (she was active in the anti-Marcos movement). “This is only the beginning. This is why museums are important. I believe that we should have permanent visual exhibitions that would impart knowledge about significant events in Philippine history accurately.”

“ReCollection 1081: Clear and Present Danger (Visual Dissent on Martial Rule) is curated by Ruel Caasi and Marika B. Constantino.