The gospel according to Gaston | Inquirer Lifestyle ❮ ❯ 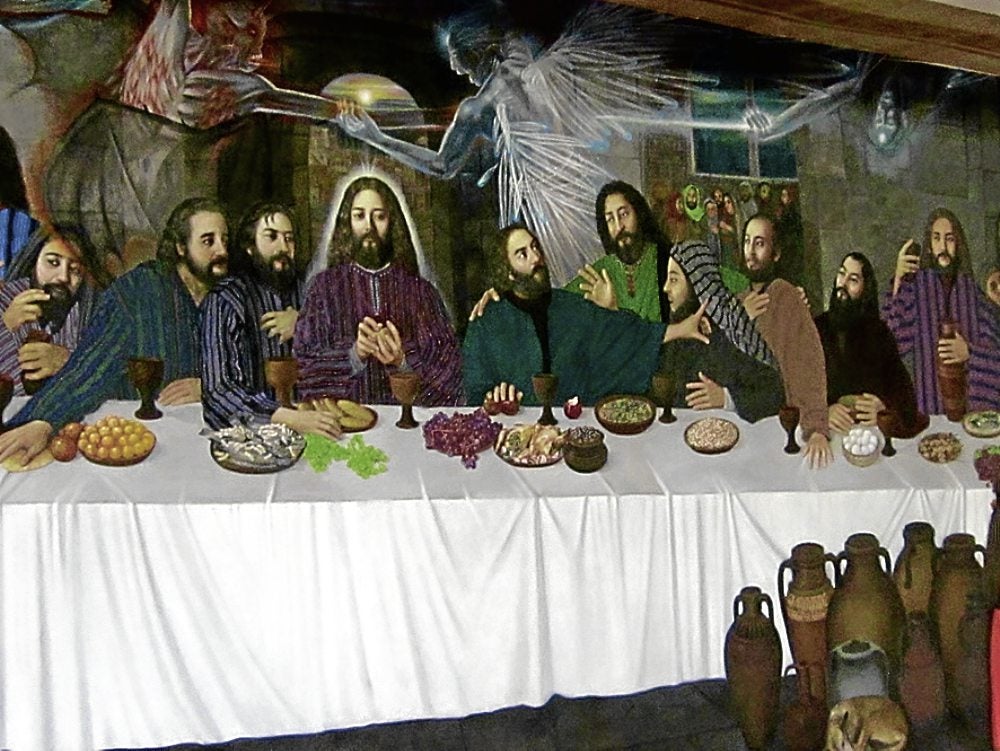 “THE LAST Supper,” as interpreted by E. Ramon Gaston

The gospel according to Gaston

One day during art class at University of Santo Tomas, E. Ramon Gaston felt puckish and placed half of his body outside the door of the classroom. Came roll call and the irritated professor, the venerable Diosdado Lorenzo, asked if he was present or absent.

“Half of my body is absent, sir, while my feet are present,” the student replied.

He was ordered out of the room.

Self-assured, confident in his talent, Gaston (“I’ve been painting even before I could speak properly”) went on to further studies in the US, Italy and England, feeling he had nothing more to learn from his mentors. He also resented being told he was painting in a classical and, therefore, passé style.

Gaston, scion of a prominent Visayan clan (the late opera diva Conchita Gaston was a first-degree aunt), became a British citizen and married an Englishwoman. All his children (except one born in Bacolod City) were born in London.

His paintings are found in churches and private collections here and abroad, and he has an upcoming show at the Intercontinental Hotel at Makati City.

Some consider Gaston a genius while others probably feel he hallucinates. Like Joan of Arc, he hears voices which he considers divinely inspired. He has dreams or visions, like one when he was present during the Wedding at Cana when the Lord Jesus performed His first miracle.

Two years ago, the artist heard a voice which he believed came from Jesus, commanding him “to paint the Last Supper, paint the Crucifixion.” He informed his wife Julia about it and she told him to go ahead: “You always hear these voices, anyway.”

And so he returned to the Philippines, set up shop on an empty fourth floor of St. Clare Montessori Center in Caloocan City (donated by a friend), and began to paint a unique version of the Last Supper.

It is a huge canvas (10 ft x 30 ft) filled with people, not just the apostles, each with a different expression, full of movement and the interplay of hands.

The most powerful imagery, above the stream of humanity, is that of an angel and demon battling it out, no doubt to capture or save souls. Each is assisted by a fellow angel, or a fellow devil. From a small window high up on the left, two children are watching the duel.

The focus is, of course, on Jesus, and He looks at the viewer with kindly, penetrating eyes; it is a haunting expression. The Lord is flanked by the apostles: John, Bartholomew, Simon, Judas (“the only one with hands seen on the table”), Andrew, Peter, Philip, James the Great, Matthew (“may peklat—he has a scar, hot-tempered”), Thaddeus, and James the Less.

There is Mary Magdalene, who is laying a hand on the table. And on the other side, below the table, we have the Blessed Mother, looking sweet and mature. She is holding on to some children. A blind teacher holds up three fingers, representing the Holy Trinity.

Swirling around them are the townspeople of Jerusalem, men, women and children. Why so many? “There is the possibility that other people were there [at the Last Supper] at first,” speculates Gaston. “The sun symbolizes the Sacred Host; we are a mini-school compared to the universe.”

Why, even the animal kingdom is represented. An asong kalye or askal (street dog) lies in repose, while two children hold on to a pet goat: “He is not a symbol of the devil but a good baby goat.”

There are jugs of wine and olive oil, and fruits and food: grapes, watermelon, a bitten apple (from the Garden of Eden, of course), onions, pears, fish and barbecued meat with pepper, and eggs.

“The food is exactly as it was cooked then, authenticated by my brother Luke, who is a chef,” says the artist.

“With James the Less, the last apostle, the work is almost complete and I can now be at peace,” Gaston observes.