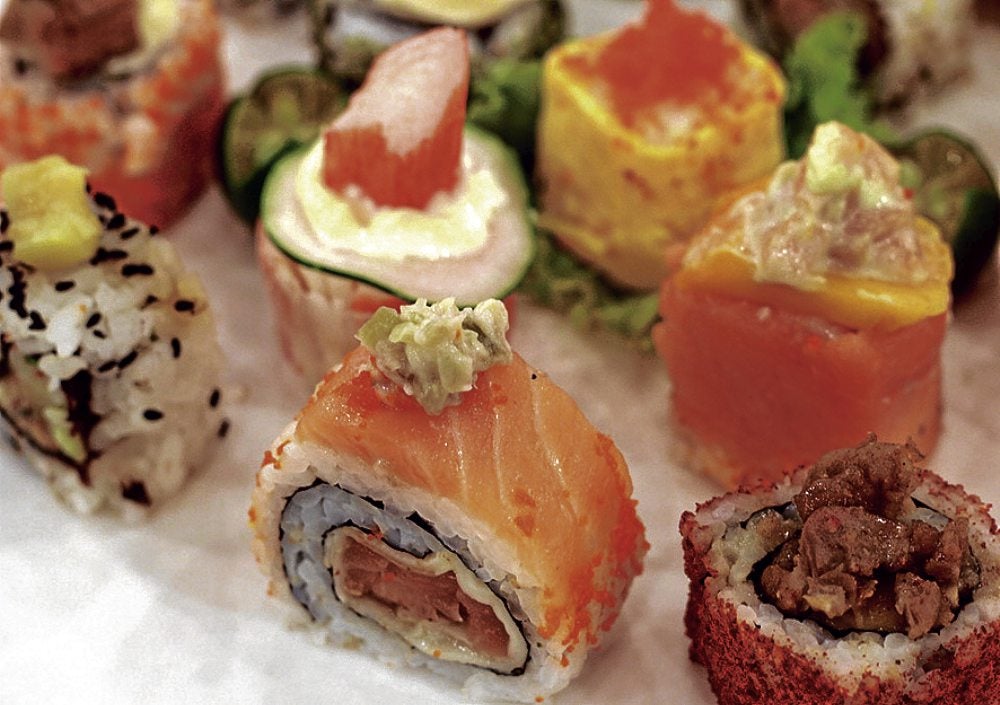 Restaurateur VicVic Villavicencio reinvented Filipino dining in his Kamayan restaurant chain, which adopted the Filipino (or Asian) practice of eating with one’s hands. This was in the ’70s when dining at Kamayan was part and parcel of Filipino lifestyle.

Putting up the Triple-V chain to include his succeeding restaurants—Saisaki and Dads—he introduced the “theater kitchen,” which allowed diners to see their sashimi being sliced and their tempura fried. Dads gave diners the choice to try pasta with different sauces,  with roast meat and other Western dishes.

Villavicencio established all these in the ’80s.

Today, three decades later, four of his six children are taking over the restaurants. We sat down with three of them over lunch at the newest Sambo Kojin restaurant on West Avenue, Quezon City: Mara Villavicencio, Kamayan group brand head and SM Megamall branch managing director; Cara Villavicencio-Espinosa, Kamayan group general manager for marketing and Edsa branch managing director; and their younger brother Bokie Villavicencio, who put up Sambo Kojin, a Japanese-Korean buffet resto, in 2010.

Managing these restaurants is not easy, they said, but guidance from their dad has helped a lot. The children are expected to work in the family business, and it is a welcome task.

“I was already working in the business while I was in school,” Bokie said. He took up a culinary course at the Center for Culinary Arts (CCA) and loves to cook.

Mara, the oldest of the three, also finished culinary arts at Global Culinary and Hospitality Academy. Her specialties include pasta and Asian dishes. Cara, who took up Organizational Communications and Marketing Management at De La Salle University, admits she’s not as skilled in the kitchen. “But I tried,” she said, laughing.

“She buys the cake,” Bokie said, referring to family gatherings.

The three Villavicencios are comfortable with each other as coworkers; Mara said this was the result of the openness they have at home.

“We can’t just say Bokie’s idea is wrong because we’re older. We listen, that’s what we learned from our dad,” Mara said.

Villavicencio they said, is “very hands-on”—as a father and mentor. He hears them out, welcomes their ideas, and guides them accordingly. He also turns down suggestions if he has to.

“But he would explain why your idea is wrong,” Bokie said.

The children respect their dad’s leadership and experience. According to Bokie, even before they opened Sambo Kojin, his dad already knew how many tempura they will cook in a day, and how many high-pressure burners the resto would need. Villavicencio could also estimate the number of air-con units they needed vis-a-vis the number of seats.

“It’s harder for us to come up with those figures since we’re handling buffet,” Mara said. “But he knows roughly how many sacks of rice we need, say, in a weekend.”

And since the kids grew up in the restaurant business, working on weekends and holidays is a given.

“Those are our peak days; we’re used to our dad working on those days,” Cara said.

Eating out, working out

Eating and cooking at home is still a form of bonding even if they deal with food all day. Or, they dine out in their favorite Chinese restaurant. Chinese cuisine, they said, is something the family hardly cooks.

They also work out together.

“We used to have ‘fitness Mondays,’” Cara said. “We go to the gym, swim, run, do Taebo. The younger kids play basketball.”

Does their dad join?

The success of the Villavicencios’ buffet businesses (they also put up Somethin’ Fishy in Eastwood, which has become popular for its breakfast buffet) seems to rest on a formula: lots of food choices, big location and theater presentation.

Villavicencio first introduced the “theater kitchen” at Saisaki in the ’90s. It has been adopted at Kamayan, Dads and Sambo Kojin. Theater kitchen works, explained Bokie, because, first, diners are entertained; second, they see how the sushi is rolled, or how the lechon is chopped.

Diners also get their food fresh—the tempura goes from the wok directly to their plate. And they see that everything is done in a clean kitchen by well-groomed cooks.

Sambo Kojin specializes in yakiniku Korean barbecue, which lets diners cook meat and veggies on their own table. Bokie recently hired a Korean chef, Kevin Huh, to jazz up the menu. Among the new items are bibimbap, kimchi varieties and desserts.

The younger Villavicencios are keeping their dad’s tradition of affordable buffet. The restaurants are all in Metro Manila, but they’ve had offers to put up branches in Cebu, Davao, even Boracay.

Accepting the offers would have given the business a nationwide edge. “But no one wants to leave Manila, and the family,” said Cara.