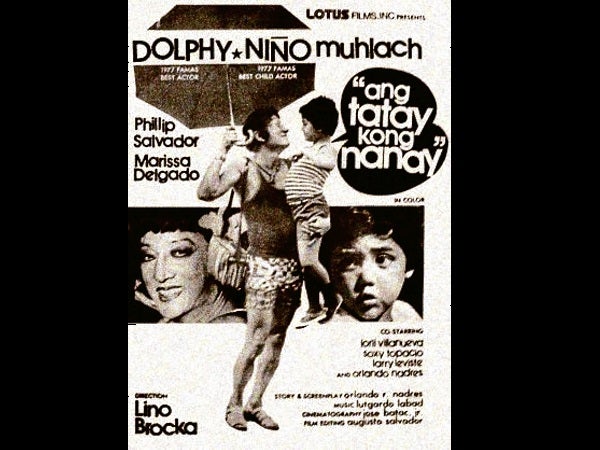 Mang Dolphy always had the last laugh when he played gay roles. Perhaps because he laughed at himself clad in outrageous women’s clothes, first and foremost. A shy smile, then a soft chuckle. He always played gays as soft-spoken, and with a moral compass pointing to integrity and optimism. Not a screaming faggot, but a proud gay man.

This film would win him his only Famas and leave me with memories of a most gifted man, sensitively focused yet connected with a nation who laughed with him, at him, and now without him.

But I digress; let me take you to our first shooting day, a basketball court in Sta. Ana, Manila, where sexy Soxy Topacio and I, clad in a Ramon Valera cocktail dress, are cavorting and soon getting into a hair-pulling altercation.

Mang Dolphy, a dour dowager in a fully beaded Renee Salud, gets into the cat-fight and rescues me.

Brocka yells “Cut!” I have lost my wig and my composure and everyone on the set is laughing, a good sign of things to come.

The next setup is filmed in a taxi cab and the movie camera is mounted on the hood of the car. Soxy sits up front with the driver while Dolphy and I sit at the back.

Brocka rehearses us and we start to drive around. I am arguing with Dolphy about his unrequited love for Philip Salvador and suddenly I flub my lines.

There is silent pause, and quietly Mang Dolphy says, “Cut,” looks into my eyes, and when he senses we are ready, simply says, “Take two, action.”

We finish the scene and drive back to the film crew to find Brocka smiling and satisfied.

The next weeks were smooth-sailing with Orlando Nadres, Soxy and I filming what would be the blueprint of Hollywood’s “Three Men and a Baby” (which was really an adaptation from a French movie). Only then, we were “Three Gays and a Wonder Boy.”

I was able to observe in silent fascination how Mang Dolphy blossomed into his character.  Off camera, his then girlfriend Lotis Key sat quietly in a corner in a long Auggie Cordero dress, reading a paperback novel.

In “Ang Tatay Kong Nanay,” the parlorista slowly becomes a father to the Niño Muhlach character, dressing and acting straight when he’s in front of him and urging his gay friends to restrain their flamboyance. The Niño character is only delighted with his gay uncles in the beauty salon.

Dolphy’s character was the first single parent I encountered!

I recall filming a scene with the great Inday Badiday where the Niño character goes missing and Dolphy’s character and his gay friend go looking for him.

The high point of the movie was another “mujeran,” a gay beauty contest and fashion show in a basketball court. Ernest Santiago made my beautiful gown; I was svelte, tall and ready for action.

The scene erupts with a shoot-out that sends the baklas to seek cover under the stage. It is here for the time that Niño, who has surreptitiously left home to catch the show, sees his “Tatay”—Dolphy in drag—dressed up like a “Nanay.”

That’s how the movie ends, full acceptance from Niño that his father is gay. Sounds so “now,” doesn’t it?

I didn’t see Mang Dolphy again for 15 years, nine of which I was self-exiled in Hollywood.

When I came home, I chanced upon Mang Dophy one afternoon at Hizon’s Bake Shop. He quickly recognized me and said in mock gay manner, “Naku ang Miss Universe ko, bumigay na!”

We laughed out loud and hugged each other like the gay BFFs we played once upon a time.

That was the last time I saw Mang Dolphy. Last night I saw his casket on TV, I shed copious tears, then I recalled his playful smile turning into an impish grin. And I knew Mang Dolphy will always be with us.