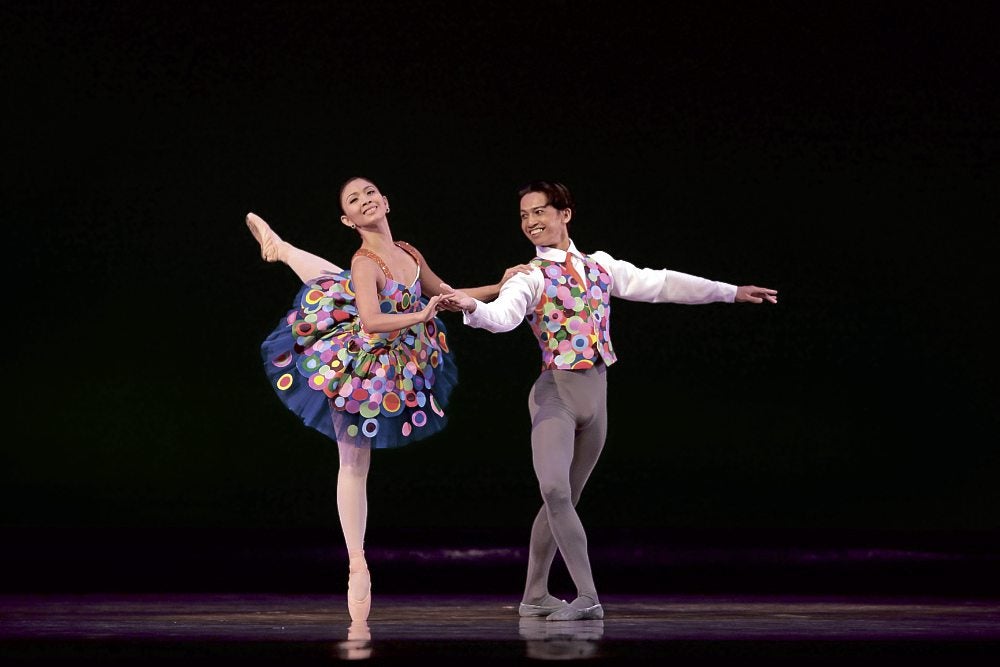 Adea and Cordero, the toast of Helsinki, show winning form

In Ballet Philippines’ 43rd- season opener “Dragon Song,” artistic director Paul Morales could not have chosen a better mix than this repertoire of modern, neoclassical, neo-ethnic and a dash of neoclassical kundiman charm, each showcasing the choreographers’ respective fortes.

Fitting, indeed, as the ballet company celebrated the winning streak of two of its principal dancers over the past two years in international ballet competitions. Candice Adea and Jean Marc Cordero, beating the competition age limit this year, capped their string of international ballet victories by bringing home the gold in the women’s senior division, and the Special Jury Award for Best Pas de Deux Technique, respectively, at the Helsinki International Ballet Competition, considered the international dance Olympics.

The pair competed in various international competitions, winning medals and special citations. For Adea, a silver medal in Jackson, US; the Maris Leipa Award for Artistry at the Boston International Ballet Competition; a bronze medal at the 8th Seoul International Dance Competition.

Cordero entered the semifinal round at the Jackson competition, making him the first Filipino male to achieve this; at the Boston competition, both Cordero and Adea won lead roles in a Russian ballet and an invitation to perform with the Russian ballet company of Andris Leipa in a Paris premiere.

Both dancers are also Gawad Buhay! awardees for their local performances.

Such was the cause for celebration and high spirits among company members and balletomanes. If only the gods-that-be and their court would take notice, then perhaps gala occasions such as these would be characterized by a crowded lobby and a ticket queue. Just the same, the show went on, and wondrously. In time, the gods would know what they had missed.

Perhaps the weakest link in the repertoire would be Hazel Sabas-Gower’s “Illustrated Dialects,” performed by a relatively new grouping of bodies. Though there was togetherness in movement, height of extensions and port de bras, some dancers displayed tentative musicality, or perhaps technique, making principal dancer Katherine Trofeo stand out even more, especially in unison moves.

And it’s not like Trofeo need do anything to stand out, as her beautiful ballerina countenance, musicality and clean lyrical line have always had swoon quality. The choreography was a tad dated, but, thankfully, the timelessness of the beautiful Filipino love song redeemed the piece.

I have always been a fan of the corps, simply because its one breath in mass movement shows the extent of dancing intimacy a company has, the depth of its training, and the ingrained-ness of musicality its mentors and trainers have passed on.

This has been relatively consistent in Ballet Philippines, and this young new corps, still and all, exhibits the kind of confidence and fighting spirit that will surely see its full strength in future productions.

In Redha Benteifour’s “Les Petit Mots d’Amour,” the unison was more tensile, showcasing  strong  potential star quality, particularly among the female dancers, most of whom were soloists.

Principal dancer Carissa Adea exemplified the choreographer’s intent: “I always want to whisper in your ear my love for you, but I never could. Today, I’m taking the courage to do it and I don’t know what’s going to happen.”

Her searing gaze as she walked in plié, voluminous skirt lifted above her knees, her male partner clutching her hair caveman-style, breathed down her neck and whispered in her ear.

In the course of the dance, a gamut of emotions that wafted through the dancers’ faces and postures, however, did not sacrifice technique; it was not a case of emoting camouflaged as dancing. The female soloists dancing alongside Adea did not miss a beat, extension per extension, gaze per gaze, and their stage presence was set.

Perhaps better viewed in an intimate theater-in-the-round, rather than get lost on a big stage, is “Kadena de Amor,” with its colloquial charm that “depicts the frailties of romantic relationships and the surprising turn of events,” as noted in the program.

Choreographer Alden Lugnasin, as I have always suspected, works best one-on-one. Cerebral choreographer that he is, he communicates his moves best when he comes face-to-face on frontal lobe with his dancer.

Cyril Fallar in “Half Past Dead” and Carissa Adea in “This Is My Life” are the perfect instruments for Lugnasin’s communiqué.

Fallar, who danced this piece in competition for the 1st Boston International Ballet Competition last year, dares push his body to extremes with tight extensions, followed by slimy contractions and graceful contortions. It is the embodiment of what Twyla Tharp would simply describe as “big” and “small,” referring to not just size of the movement, but texture and gesture as well.

What Fallar lacks in height he makes up for in complete muscle control, truly depicting what Lugnasin imagines as the consciousness of the soul after death.

In the same vein, Carissa Adea and her body are not exempt from Lugnasin’s expression of independence and elegance of a hardworking woman. But Adea brings it even to higher ground, articulating every sinew literally down to her toes with such tension, that you hear the silent scream: In independence, there is pain, there is struggle, but masked with the elegance of her slinky lace gown.

The fact that she dances seated on the edge a stage can be paralleled to life on a tightrope. When she shoots up her leg while seated in a six-o’clock position, it stays up motionless; when she wiggles her toes, she defines each segment of each digit so sensually, it conveys a yearning sublimated by hard work, if only to keep sane.

When Adea first danced this a few years ago, she performed it relying solely on her technique. This time, she brings more to the piece through her maturity as a dancer, a life experience perhaps, the second-skin mastery of her technique and sheer familiarity of how far she can make her body move.

In Lugnasin’s choice of Pilita Corrales’ velvety rendition of the popular song instead of a belted-out version, he cheekily underscores the poise under writhing pressure.

In restaged dances, there is a danger of the choreography getting lost in translation. Sadly, this is the case with Agnes Locsin’s “Moriones.” Although Lugnasin, who was one of the original dancers of this piece, restaged his mentor’s work, he concedes that the rigid training he and his co-dancers underwent with Locsin to create this piece could not be matched for its restaging. It would then be unfair to compare the outcome of the present to the original execution.

There is an amorphous term that can only be described as “Locsin-ish,” roughly defining a certain edge and angularity of movement, quirky yet rhythmic, falling sharply on musical accents, that was missing in this execution.

The successive monkeylike jumps in one section were not as springy as before, not as high. When the men climb on each others’ backs, there is visible hesitancy.

I missed the jaggedness of line and the abruptness of shifting motions which made this piece so exhausting but exhilarating to watch. However, even when technique falls short, choreography with good bones is never lost.

The much-awaited grand pas de deux created by Augustus “Bam” Damian III especially for Candice Adea and Jean Marc Cordero did not disappoint. From their first entrance, Adea exuded the aura of a winner, as Cordero was at his best danseur’s strut.

The choice of Rossini’s happy music taken from various overtures were the perfect pieces to convey victory, joy, playfulness, youth and dedication rolled into one. The enthusiastic footwork inherent in neoclassical ballets received clean and assured execution from Adea, accompanied by gracefully articulated ports de bras and lilting head moves.

The choreography that required tight partnering was addressed elegantly by Cordero, showcasing his worth as Best in Pas de Deux Technique. In the vein of choreographer August Bournonville, Damian gave equal weight to both danseur and ballerina, fully conscious that both had something to give.

In Adea, there was fluid phrasing; in Cordero, there was derring-do in his solos, especially in his tours en l’aire, tour jetes, multiple pirouettes and his ending flourishes. Choreography, dancing and music were a delightfully tight mesh that made the piece truly victorious.